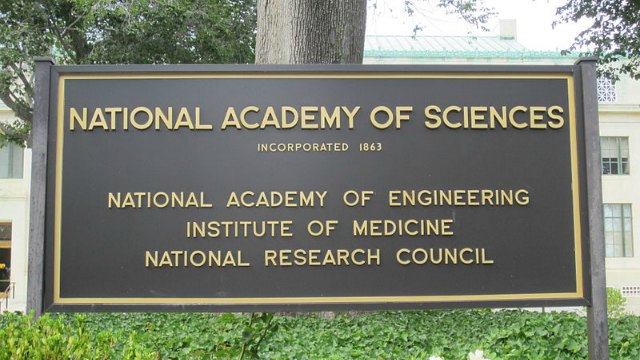 WIKIMEDIA, ANOTHER BELIEVERThe National Academies of Sciences, Engineering, and Medicine are revising their conflict-of-interest (COI) policy, National Academy of Sciences (NAS) president Marcia McNutt announced this Monday (May 1) in an address to the organization’s 154th Annual Meeting in Washington, DC.

Two changes were effective “immediately,” as the Chronicle of Higher Education reported last week and National Academies spokesman William Kearney confirmed to The Scientist. First, the academies will publish disclosures of conflicts of interest (COIs) of the scientists who author academy reports in the documents themselves. Previously, those COI disclosures appeared only online. The academies will also hold its staff members to the same COI policies as the report authors, also known as committee members.

Several other changes are under consideration. The academies are reconsidering the dollar value of gifts, income, and investments that constitutes a COI. They are also thinking about including not only current activities and...

In her speech, McNutt said that their “guidance for revising [the] conflict-of-interest policies” originated from a 2015 retreat during which academy members discussed how to promote scientific integrity and maintain public trust, the recommendations of which later appeared as a “Perspectives” article in Science.

Watchdogs have been scrutinizing the academies' COI policy, which was last updated in 2003, for longer. In 2014, the Milwaukee Journal Sentinel reported that nearly half the members of an Institute of Medicine (now National Academy of Medicine) committee that authored a 2011 report on pain management had current or past connections to companies that manufacture narcotics, including opioids.

In December 2016, The New York Times reported undisclosed COIs among committee members selected to review the regulation of the biotechnology industry. Further, based on a tip from Tim Schwab, a food researcher at the DC-based advocacy group Food and Water Watch, the Times revealed that the NAS staff member who selected the committee members was applying to work for a biotech nonprofit during the selection process.

In June 2016, Schwab addressed a letter to NAS executive officer Bruce Darling asking the academies to increase the diversity of perspectives and address COIs on the biotechnology project committee. “Dozens of public interest group leaders and academics” signed the letter, Schwab told The Scientist in an email. The report in question was released, in an uncorrected, “pre-publication” form, this March. Only the two COIs the academies identified—and none of those raised by the Times—appeared on the website; no COIs appeared in the report itself.

In February 2017, Schwab and Sheldon Krimsky of Tufts University published a study in PLOS ONE reporting undisclosed COIs among the authors of a 2016 academies report on the use of genetically engineered crops. The academies responded to the PLOS ONE study in March, stating that it was “unfair and disingenuous for the authors of the PLOS article to apply their own perception of conflict of interest to our committee in place of our tested and trusted conflict-of-interest policies.”

Now, just two months after that statement, the academies are changing those policies.

Schwab said he believes they are taking his advice in some respects. He told The Scientist that he and Krimsky “made several recommendations, a number of which the academies seems to have been following fairly closely in their announcement today.” Those include the academies’ plans to consider past conflicts of interest (the PLOS ONE authors suggested “requir[ing] committee members to submit three years of financial COI disclosures”) and reexamining the financial disclosure threshold, which the PLOS ONE authors suggested eliminating.

Schwab added that the new policies also seemed to reflect the Times investigation that reported on the study director who had applied for a job in the very industry that was under the academies’ scrutiny. “I think the academies’ announcement this morning about vetting staff members for conflicts of interest is clearly a response to that report.”

The academies’ Kearney told The Scientist that the update is a “periodic review.” Referring to the report on genetically engineered crops and Schwab’s paper, he added: “We fully stand behind that committee and its report which we are very proud of and our decision to review our procedures had nothing to do with that.”

Adam Fagen, formerly the executive director of the Genetics Society of America, worked for NAS from 2003 to 2010, including as a study director assembling committees, and was not involved in any of the controversial committee reports mentioned above. The decisions to disclose COIs on reports and hold staff to the same standards as committee members make sense to him, he told The Scientist, but he is “neutral” about the other potential changes.

“Sometimes it’s difficult to get folks who are both knowledgeable but completely uninvolved with industry or some sort of potential conflict,” he said, adding that “just because somebody has the potential to make money doesn’t mean that they leave their objectivity at the door.”

Beyond questions of the COI policy itself, Schwab mentioned the importance of enforcement. “The existing conflict of interest policy at the National Academies from 2003 . . . was fairly capable, however imperfect, of policing, monitoring, and requiring disclosure of conflicts of interest,” Schwab said. “Nevertheless, the National Academies failed to disclose relevant financial conflicts, so it really does raise a question over how effective these changes will be.”