From beating hearts to breathing lungs, organs-on-chips are some of hottest new tools for human biology research. Although these devices may bear closer resemblance to computer components than human body parts, scientists have now created working models for a whole range of organs, including the liver, the lung, and even the female reproductive system.

Researchers hope to use these devices to model disease and facilitate drug development. “I think for most people, the goal is to replace animal testing and to carry out personalized medicine in a more effective way,” Donald Ingber, the founding director of the Wyss Institute for Biologically Inspired Engineering at Harvard University, tells The Scientist. 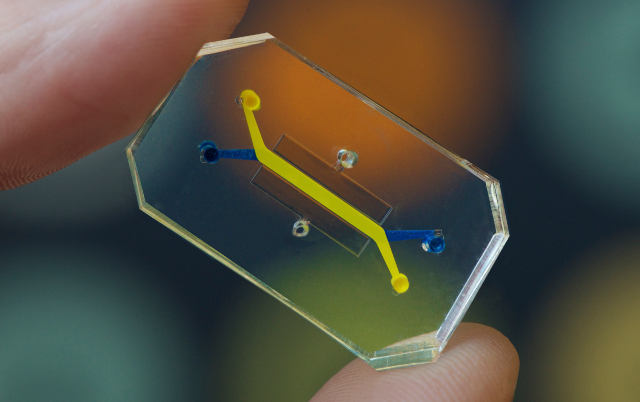 At the Wyss Institute, scientists have developed about 15 different human organs on...

“The novelty that we incorporated [into our chips] was based on my work that showed that mechanical forces are as important as chemicals and genes for tissue development, maintenance, and function,” Ingber says. “This one lung alveolus chip provided proof-of-principle for modeling normal organ-level physiology and disease, discovering new insights into the importance of physical forces, finding new therapeutic targets and even a new drug.”

Ingber and colleagues have also incorporated mechanical forces into their other organ chips—for example, peristalsis-like motions in the gut chip and blood-vessel pulsations in the kidney chip. 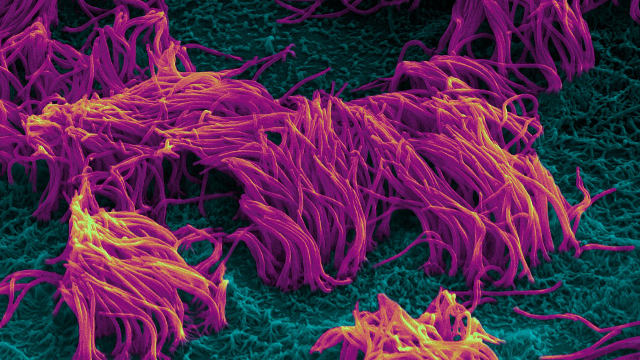 A close-up of image of the human bronchiolar epithelium on an airway chip. Mucus-transporting cilia (pink) are protruding from the epithelial cells (teal) into the air-filled lumen.WYSS INSTITUTE AT HARVARD UNIVERSITY

One of the institute’s latest inventions is the airway-on-a-chip, which is similar to the initial lung chip, except that instead of alveolar cells, the device is lined with human bronchial epithelial cells. The team has used this chip to model chronic obstructive pulmonary disease and asthma. They have even used this device to study the effects of smoking on the bronchial epithelium by hooking it up to a machine that burns cigarettes and inhales and exhales smoke to mimic a human smoker. 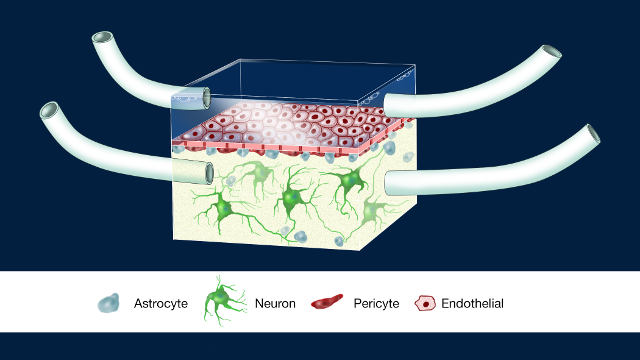 Illustration of the NeuroVascular Unit (NVU) chip, a model of the human blood-brain barrier. A porous membrane separates a chamber modeling the brain and another that represents the surrounding vasculature.DOMINIC DOYLE, VANDERBILT UNIVERSITY

A group led by John Wikswo, a biomedical engineer at Vanderbilt University, has created a chip to study the brain and the blood-brain-barrier.

“We chose to focus on the human neurovascular unit (NVU) because of the importance of the interactions between cortical neurons and the blood-brain barrier (BBB) that protects them, hence the term neurovascular unit,” Wikswo writes in an email to The Scientist.

The NVU chip consists of a tiny cavity divided by a porous membrane separating one chamber, which represents the brain, from another chamber, which represents the surrounding vasculature. It contains cortical neurons, microvascular endothelial cells, astrocytes, and pericytes from humans. According to Wikswo, this structure “allows us to study the metabolomic response of the neurons and other cells to drugs and inflammatory signals that are delivered across the BBB.”

The team has used this NVU chip in a variety of applications, such as investigating disease states and to study the effects of inflammation. Currently, they are also initiating a program to use this technology to test drugs for the pharmaceutical industry. 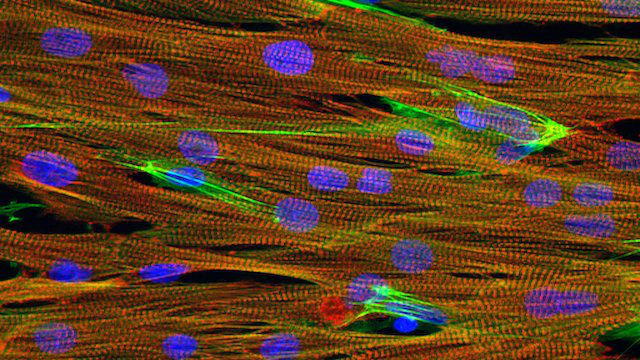 Megan McCain, a professor of biomedical engineering at the University of Southern California, works with hearts-on-chips: small eraser-size devices that house live, beating heart cells. To create these devices, researchers first take skin cells from patients and reprogram them into stem cells that later develop into cardiac myocytes. They then place these cells on chips containing bioengineered surfaces that recreate the heart’s natural environment. “The key metric that we’re interested in is the generation of force,” McCain says.

In 2014, McCain, who was then at the Wyss Institute, used the heart chips to model Barth syndrome, a rare, inherited disorder associated with weakened heart muscles. Currently, her team is focused on using these devices to study other diseases. “Disease modeling is where I think it will have the biggest impact—especially inherited disease,” McCain tells The Scientist. “Even if we make a knockout mouse, we don’t seem to capture all the aspects of the disease in humans.” 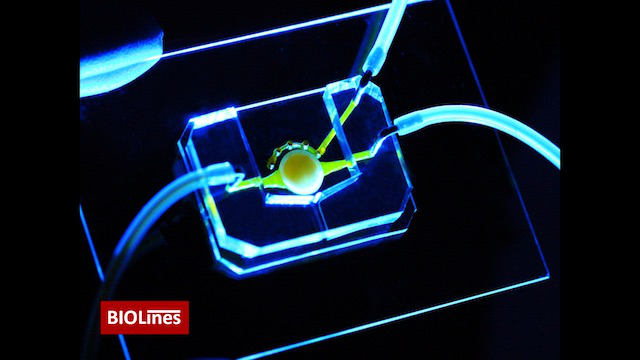 An eye-on-a-chip, with microfluidic channels (yellow) that bring nutrients to cells located in the circular scaffold at the center. The team has also attached a microengineered eyelid that mimics blinking to this chip. LABORATORY OF DAN HUH AT THE UNIVERSITY OF PENNSYLVANIA

Dan Huh, a bioengineering professor at the University of Pennsylvania who was a postdoc in Ingber’s lab, and colleagues have created an eye-on-a-chip—with an eyelid that blinks.

This chip, which is roughly the size and shape of a contact lens, approximates the ocular surface of the eye. It contains human cells from the cornea and conjunctiva (the mucosal layer that covers the eye). The team also engineered an eyelid, which attaches to the surface and allows the eye to blink, keeping the surface of the chip lubricated.

“We found out that blinking motions are very important for maintaining the ocular surface tissue,” Huh says. “And we’re using this platform to mimic certain chronic eye diseases, such as dry eye disease.” According to Huh, his lab also plans to use this chip to model other eye conditions, for drug testing and development, and to test and optimize contact lenses. The team is also currently developing a retina-on-a-chip.

“The eye is one of the main focusing areas of my lab,” Huh says. His group is also working on chips for a variety of other organs, including the lungs and placenta. 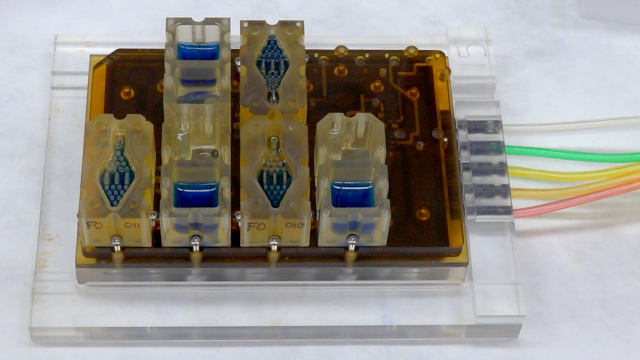 Many groups aim to link different organ chips together to recreate organ systems or even the entire human body. Teresa Woodruff, a professor of obstetrics and gynecology at Northwestern University, and colleagues have linked five miniature organs together in a hand-size chip to model the female reproductive tract.

The chip, dubbed EVATAR, is a series of tubes and pumps that carry a blue, blood-like fluid through cells containing five mini organs—a fallopian tube, a uterus, a vagina, an ovary, and a liver. “What [this] system allows us to do is move media in a way that brings in fresh nutrients and eliminates waste,” Woodruff says. “That’s what happens in the body.” By adding hormones to the circulating liquid, the team was able to mimic the 28-day menstrual cycle.

The researchers hope to use EVATAR to elucidate reproductive physiology and disease, as well as in drug testing and development. They are also working on a male version of the chip, ADATAR. 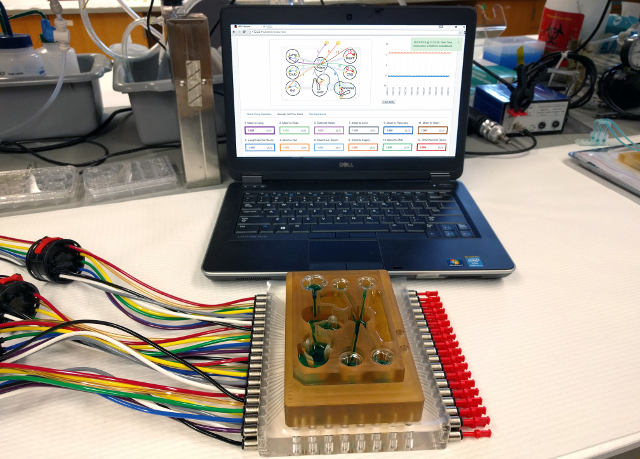 A multiorgan platform connected to associated software. Each well holds a miniature physiological system, such as the lung, the gut, or the central nervous system. Fluid flowing through the channels mimics physiological cardiac output.PHYSIOMIMETICS, MIT

Linda Griffith, a biological engineering professor at MIT, and colleagues are one of two groups working on projects funded by the US government’s Defense Advanced Research Projects Agency (DARPA) to a create “bodies-on-chips,” which aim to connect ten different mini organ systems in an integrated circuit. The other group is at the Wyss Institute. 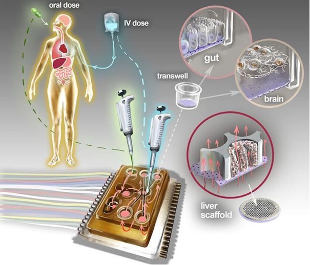 Artistic rendition of the human-on-a-chip approach to in vitro biology. Bioengineered devices nurture many 3D tissue cultures representing the smallest functional unit of each organ of interest.PHYSIOMIMETICS, MIT

According to Griffith, her team recently “completed our big DARPA milestone, which is [connecting] 10 organ microphysiological systems for a month.”

Connecting multiple organ chips allows researchers to interrogate organ interactions. In one of their latest experiments, Griffith and her team investigated the effects of inflammation in a system where human intestine chips and liver chips were linked. This study revealed, among other things, how cross-talk between the two organs influence gene expression and tissue-specific functions.

“I think right now the field is in the early stage of thinking about complex physiology that involves multiple interacting cell types within an organ and between organs, particularly when it involved immune systems interacting with tissue cells,” Griffith says. “A huge part of our program focuses on immunology.” 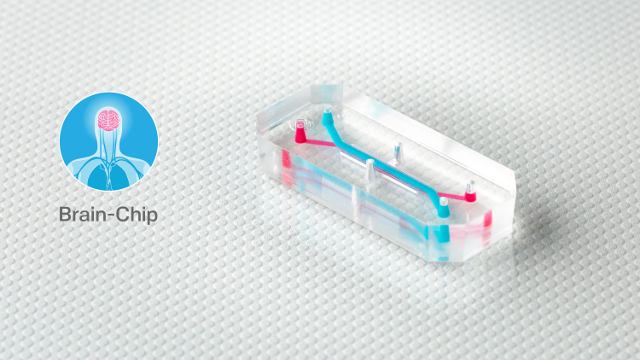 Emulate’s Organ-Chips, like this Brain-Chip, contain tiny hollow channels lined with tens of thousands of living human cells and tissues, and are each approximately the size of an AA battery. COURTESY OF EMULATE, INC.

Start-up company Emulate was formed to commercialize organ-on-chip technology developed at the Wyss Institute, including Lung-Chips, Liver-Chips, and Intestine-Chips. While these chips possess different cell types and functions, their standardized design makes them look identical from the outside. The company recently announced its plans to send its Brain-Chips to the International Space Station, where they will be used to study, among other things, the blood-brain barrier and how stressors and inflammation affect brain function.

The company’s Brain-Chip contains both neurons and vascular endothelial cells, and is made to model both brain physiology and the blood-brain barrier. “We’re not trying to recreate the whole brain, but simply the smallest functional unit of the organ,” says Geraldine Hamilton, the president and chief scientific officer of Emulate. “In this case, for example, [we] take the blood-brain barrier, which is composed of microvascular endothelial cells, neurons, astrocytes, and pericytes—these all interact in a very specific manner and need to be organized in a very specific way—this is what we, on a very small scale, recreate within the chips.”