According to a February 11 report from the Chinese Center for Disease Control and Prevention, the coronavirus known as 2019-nCoV has infected more than 42,000 people and killed 1,016 in China since December. In a study published last week (February 7) in Cell Host & Microbe, researchers annotated three 2019-nCoV genomes and identified both differences and similarities compared with other genomes, including that of severe acute respiratory syndrome (SARS) coronavirus.

“It’s very helpful to know what the genome looks like and what the proteins look like,” says Rachel Roper, a biologist at East Carolina University who was part of the team that first analyzed and sequenced the SARS coronavirus genome in 2003 and did not participate in this study. “It gives us some idea about what protein differences may be that are allowing this virus to be so virulent and transmissible in humans.”

We’re all wondering where this virus came from, and we can see from the new sequence and the sequences that we’ve already had for coronaviruses that it’s likely to be a recombinant of a number of different coronaviruses that are known.

As of January 20, there were 14 genome sequences for 2019-nCoV that had been released by six different labs. Each is available to researchers through either the National Center for Biotechnology Information’s Genbank or the Global Initiative on Sharing All Influenza Data (GISAID). While some research teams have done preliminary phylogenetic analysis and annotation, this report is one of the first in-depth looks at these genomes.

Taijiao Jiang, a computational biologist at the Chinese Academy of Medical Sciences & Peking Union Medical College, and colleagues wanted to gain “insights into the molecular mechanisms underlying the functionality and pathogenesis of this novel virus,” he tells The Scientist in an email. They annotated three genomes of 2019-nCoV, which were sequenced from samples collected on December 30 and January 1 by the National Institute for Viral Disease Control and Prevention, part of the Chinese CDC and are available through GISAID.. Then they compared them to bat SARS-like coronaviruses, human SARS coronaviruses, and human Middle East respiratory syndrome coronaviruses (MERS-CoV).

The authors found that there were only five nucleotide differences—in a total genome of about 29,800 nucleotides—among the three 2019-nCoV genomes. They also identified 14 open reading frames, predicted to encode 27 proteins, including four structural and eight accessory proteins. Previous coronavirus research indicates that accessory proteins may mediate the host response to the virus, which can affect pathogenicity, and may make up part of the viral particle.

Because the researchers identified just five nucleotide differences among the genomes, it’s unlikely that there are any significant changes between the viruses that affect their pathogenicity or transmissibility, “but really all it takes is one change,” says Anthony Fehr, a biologist at the University of Kansas who studies the replication and pathogenesis of coronaviruses and was not involved in the work. Whether these nucleotide differences mean anything functionally for the viruses will be something look at in the future, he adds.

“The structural proteins are very highly conserved between all coronaviruses, whereas accessory proteins are generally unique to each specific group of coronaviruses,” explains Fehr. The amino acid sequences show “the connection of this virus to the SARS-like coronaviruses and a little bit more distant relationship to SARS coronavirus.”

Our “analysis of genome data of 2019-nCoV together with other coronaviruses clearly shows that, although this novel virus has high sequence similarity to SARS virus, they belong to distinct phylogenetic branches and were both derived from SARS-like virus isolated in bat,” writes Jiang in an email to The Scientist.

In the paper, the authors acknowledge that, given the limited knowledge of 2019-nCoV, it is difficult to infer the functional significance of the 380 amino acid substitutions they found between 2019-nCoV and the SARS and SARS-like CoVs. According to Jiang, this question, as well as figuring out how the novel coronavirus has mutated and adapted over its short history in humans, will be the focus of future research.

“We’re all wondering where this virus came from, and we can see from the new sequence and the sequences that we’ve already had for coronaviruses that it’s likely to be a recombinant of a number of different coronaviruses that are known,” says Roper. She adds that this finding could help researchers understand how coronaviruses can jump into humans—2019-nCoV is the third to do so in the last 17 years. “This may continue, so the more we know about these the better.”

“The authors talk about it transmitting finally to humans, but we don’t know that this is its final jump. It could transmit to cats or dogs and then circulate back to humans,” says Roper. “We were able to control and stop SARS because it didn’t get into any other animals. . . . Hopefully it won’t happen, but we shouldn’t assume that it’s just going to stop with us.” 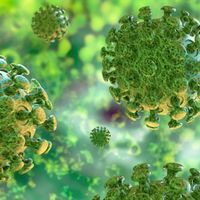