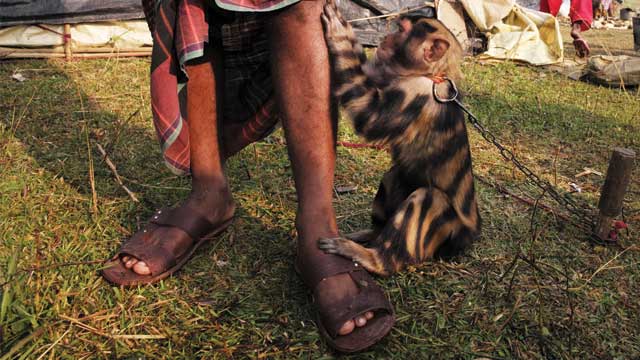 About a decade ago, Lisa Jones-Engel was traveling through rural Bangladesh in a caravan of colleagues she calls “Team Monkey,” a band of international researchers comprising a veterinarian, her husband (a physician/epidemiologist), zoologists from Jahangirnagar University, her daughters/field assistants, and others. The group had been collecting macaque feces as part of a project with the Centers for Disease Control and Prevention (CDC) to understand how picornaviruses may be moving between humans and monkeys in the region. As the travelers turned off a paved road to head toward the village of Dhamrai, they drove past a man walking a monkey painted with tiger stripes.

“I thought, ‘What the hell was that?’” Jones-Engel, an anthropologist and primatologist at the University of Washington, recalls. The caravan stopped and Jones-Engel approached the monkey. She...

The man was a member of the Bedey, a group of nomadic people, some of whom stage informal shows featuring their macaques. The monkeys are completely integrated into Bedey life—not only do they provide every bit of income the families survive on, they also physically interact with humans all the time. As a result, bites are a frequent occurrence among the monkey trainers, and Jones-Engel recognized that this community could provide an excellent opportunity to study the transmission of simian foamy virus, a common retrovirus among nonhuman primates that is transmitted through contact with saliva.

Jones-Engel teamed up with Maxine Linial, a virologist at the Fred Hutchinson Cancer Research Center, and colleagues to quantify the prevalence of the retrovirus among 38 performing monkeys and dozens of free-ranging macaques in Bangladesh. Thirty of the performing primates and 119 of the 126 wild macaques tested positive (Emerging Microbes & Infections, doi:10.1038/emi.2013.23, 2013).

It stood to reason, then, that Bedey were being exposed to the virus, especially given how often they were bitten. Jones-Engel remembers that when she first started asking Bedey monkey trainers if they could recall specific experiences being bitten, they just showed her their scar-covered arms. The blood work, however, told a different story.

Only 1 of 45 Bedey sampled was seropositive for antibodies against simian foamy virus, while 17 of 269 villagers who don’t work with monkeys were positive. At first, Jones-Engel didn’t believe the results. “I remember saying to Maxine, ‘Is everything OK with the assay?’ These folks were never, ever positive, and it’s just astonishing given their exposures.”

Simian foamy virus is known to infect humans. Interest in the virus picked up steam in the 1980s, when scientists pinpointed apes as the reservoirs of HIV. Concern over zoonotic transmission of other retroviruses led the CDC and other agencies to take a closer look at simian foamy virus. Beginning in the 1990s, Bill Switzer, the non-HIV retrovirus surveillance activity lead in the laboratory branch of the Division of HIV/AIDS Prevention at the CDC, and his colleagues sampled zookeepers and researchers who work with nonhuman primates in the lab. “The rates [of simian foamy virus infection in humans] varied depending on the types of exposure. In research workers it was 1 to 3 percent. In some zoo workers we saw it as high as 11 percent,” says Switzer. In Cameroon, a study led by Antoine Gessain of the Institut Pasteur in Paris found that 18 percent of people who reported being bitten or scratched by a nonhuman primate tested positive for simian foamy virus, while only 0.2 percent of the general population was positive (PLOS Pathog, 7:e1002306, 2011).

The Bedey, it seemed, should also have a high infection rate. “We were very surprised to find out that the evidence of infection in [the Bedey] is much less than [in] the ordinary village residents,” says Linial. Her team has not yet figured out why, but Linial has hunches. She does not think it has to do with the virus or the monkeys (the Bedey capture them from the wild instead of breeding them), but perhaps with the people—specifically, their innate or adaptive immune systems. “The Bedey, even when they’re little children, are around monkeys all the time. So it is possible—[though] there’s no evidence at all—that perhaps they develop neutralizing antibodies to the virus. This renders them unable to be infected.” Another possibility is that the Bedey have different alleles at innate immune genes, such as APOBEC3G, which encodes an enzyme that suppresses retrovirus replication.

“This can be possible,” says Gessain, adding that it will be important to expand the study to larger numbers of Bedey to confirm the differences between the groups. “It’s quite interesting, but this is speculation.”

Jones-Engel adds another possible explanation for their results—a long shot, but one to be explored: medicines. The Bedey have a long history as healers and use herbal medicines on themselves and on their monkeys. Perhaps that could account for the low prevalence of the virus, but the group will need to collect more data to say for sure.

Linial is applying for grants to fund further research on the Bedey performers and their monkeys, but she says it can be a hard sell when funders want to focus on diseases with public-health impacts. Although there is no evidence that simian foamy virus is pathogenic to humans, it’s clear from the AIDS pandemic that benign retroviruses are capable of evolving into pathogens. “My idea is, we should understand viruses before they become pathogenic,” Linial says. “If we had known more about lentiviruses before HIV emerged, maybe things would have happened differently.”