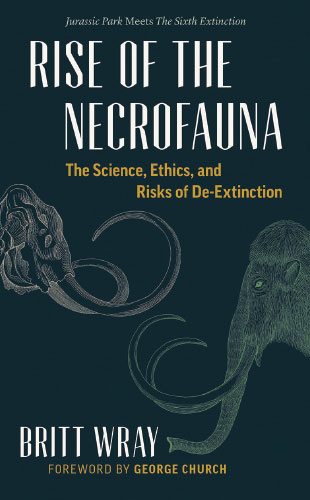 GREYSTONE BOOKS, OCTOBER 2017There may come a day when woolly mammoth–like proxies with imposing curled tusks and that iconic, shaggy mane will traipse again through their ancestral stomping grounds in the Siberian tundra. The woolly mammoth went extinct after the last holdouts on Wrangle Island, off the northern coast of far eastern Siberia, died off between 3,600 and 4,000 years ago. For now, however, the promise of this futuristic vision lives in labs at Harvard Medical School—and the cells in petri dishes are a long way off from assembling into a complete animal. Researchers are nowhere close to recreating fully formed mammoths, and, thus far, scientific efforts to resurrect the extinct beasts have been rather incremental. But that hasn’t kept Harvard Medical School researcher George Church from predicting that he and his colleagues, who collaborate on a de-extinction project known as the Woolly Mammoth Revival, will create...

I explore this and other tales of de-extinction in my book, Rise of the Necrofauna.

Bobby Dhadwar, a postdoctoral researcher in Church’s lab, has been laying some of the groundwork for creating the engineered embryos. Since the project’s early days, he has been involved in editing “background cell types” in order to test the effects certain woolly mammoth–specific genetic changes have on available cells that most resemble those of a mammoth: Asian elephant cells.

To start, Dhadwar and his colleagues identified traits that people normally attribute to the woolly mammoth, but that are missing in Asian elephants. These include an abundance of reddish-brown hair and a form of oxygen-
binding hemoglobin that functions well at low temperatures. In their early experiments, the researchers went hunting in the genomes of dogs, cats, mice, and even humans with a genetic syndrome that causes unchecked hair growth all over the body in order to identify sequences that might imbue an elephant with a woolly mammoth–like pelage. But now the scientists rely on a customized bioinformatics pipeline that compares genes recovered from the ancient DNA of mammoth remains found all over the world.

Because Church’s lab had a hand in developing CRISPR-Cas9, it was a natural choice for Dhadwar to use the gene-editing tool to introduce woolly mammoth–specific genetic changes into Asian elephant cells. The plan is to turn Asian elephant cells into induced pluripotent stem cells and then differentiate them into specific tissue types that will display various mammoth phenotypes of interest. This step is important because the researchers need to test their gene-editing protocol.

Dhadwar has been introducing woolly mammoth single nucleotide polymorphisms (SNPs) into immortalized Asian elephant cells. By making one genetic change per immortalized cell line, he is able to test the efficacy of each edit he makes. Eventually, Dhadwar and his colleagues will combine all of the various edits they have made into one master cell using CRISPR-Cas9. If they manage to do all of this inside of an Asian elephant embryo, then they’ll be well on their way to making woolly mammoth de-extinction a success, or at least, to creating a closely related hybrid. “If we can move over just a few genes, we might not get a woolly mammoth, but at least we would get a cold-tolerant elephant,” Dhadwar says.

But why does anyone want torecreate an extinct mammoth or a cold-tolerant elephant in the first place? The answer to that is part of a much wilder and woollier story.

Britt Wray is cohost of the BBC podcast Tomorrow’s World. Read an excerpt of Rise of the Necrofauna: The Science, Ethics, and Risks of De-Extinction on October 1.