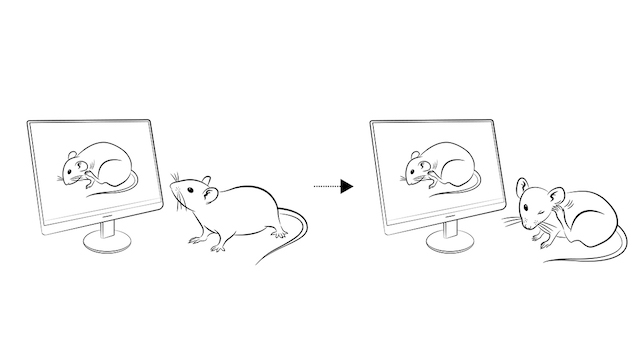 WASHINGTON UNIVERSITY CENTER FOR THE STUDY OF ITCH

Seeing someone scratch often spurs an itchy feeling that wasn’t there before. Itches may be contagious for mice, too, according to a study published Friday (March 10) in Science.

“Scratching is an unconscious behavior evoked by an uncontrollable urge—not a decision—therefore this is what we call innate behavior, a basic instinct,” coauthor Zhou-Feng Chen of the Washington University school of medicine, told The Guardian.

Chen and colleagues decided to investigate the mechanism behind this behavior in mice. First, they exposed mice to conspecifics that were scratching (either in an adjacent cage or on video), and found that this increased scratching behavior in the mice. The team also discovered that the mice who had caught the itch displayed more activity in the suprachiasmatic nucleus (SCN), a brain region involved in regulating circadian rhythms, than control animals. The study also suggests that...

Why itches are socially contagious is unclear, though Chen told LiveScience that it could be a protective mechanism. “It's possible that when a lot of mice are scratching, maybe it warns other mice that this is a place that has a lot of insects, and you'd better start scratching before it is too late," he said.

Anil Seth, a neuroscientist at the University of Sussex who was not involved in the research, told The Guardian that while this study suggests that “very deep and evolutionary ancient mechanisms might be involved” in contagious itching, it does not necessarily explain the similar phenomenon in people. “In humans, contagious itching is accompanied by subjective feelings of itchiness and involves a whole range of brain areas associated with processing of touch and emotion,” he said.