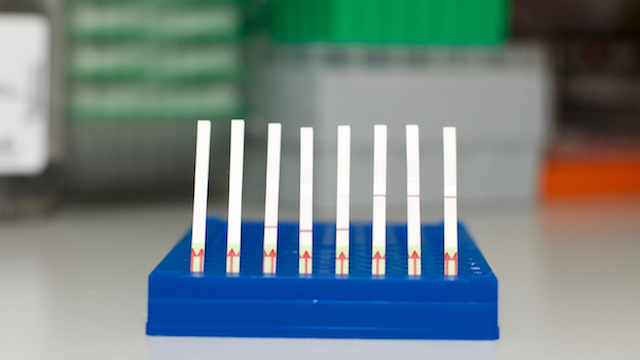 A collection of SHERLOCK testsZHANG LAB, BROAD INSTITUTE OF MIT AND HARVARD

One of the new tools, dubbed DETECTR (DNA Endonuclease Targeted CRISPR Trans Reporter) was developed in Jennifer Doudna’s lab at the University of California, Berkeley. It takes advantage of the CRISPR enzyme Cas12a’s ability to continue cutting single-stranded DNA after identifying and cutting its target. By programming CRISPR-Cas12a to home in on distinct sequences in different types of human papillomaviruses (HPV) and linking it a “molecular neon sign, which literally glows when Cas12a starts shredding DNA,” the team was able to rapidly identify specific HPV strains from patient samples in test tubes, STAT News reports.

“Certainly there are improvements to be made, but as far as a proof of principle experiment we were really...

A paper from MIT’s Feng Zhang and his colleagues describes a similar tool—a new version of a CRISPR-based nucleic acid detecting platform, SHERLOCK, which debuted last year. At the time, the researchers reported that the device could genotype human DNA and identify both pathogens and cancerous mutations. The new version of SHERLOCK is three times more sensitive than the original and can detect multiple genetic signatures at once.

Both DETECTR and SHERLOCK could one day be used to cheaply and quickly diagnose infections. They enable “a new generation of diagnostics that may be more widely available and more cost effective than current technologies,” Mitchell O’Connell, a professor of biophysics and biochemistry at the University of Rochester who was not involved in either study, tells The Verge.

The third study unveils two CRISPR-based systems, both dubbed CAMERA (CRISPR-mediated analog multi-event recording apparatus), that can record specific events, such as exposure to antibiotics, nutrients, or light, in bacterial and human cells. “There are a lot of questions in cell biology where you’d like to know a cell’s history,” coauthor David Liu of Harvard University and the Howard Hughes Medical Institute tells STAT News. “We set out to turn changes in a cell’s state into permanent changes in its DNA.”

For both systems, Liu and his colleague programmed CRISPR-Cas9 to activate under specific conditions, such as in the presence of a drug, nutrient, or virus. According to STAT News, these devices could one day be adapted into biological sensors for the environment or as a tool to document which genes are turned on or off during the course of development.

“We’re finding more and more creative ways to make use of these tools, catching up with the diverse applications” of CRISPR in nature, Liu tells STAT News.