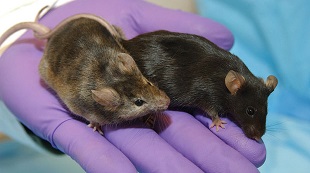 WIKIMEDIA, NHGRI, MAGGIE BARTLETTThe National Institutes of Health (NIH) will soon ask grant applicants to include both male and female animals or tissues in preclinical research funding proposals, according to a policy announcement published this week (May 14) in Nature by Francis Collins, NIH director, and Janine Clayton, the agency’s associate director of Research on Women's Health.

It has become clear in the last few decades that men and women respond to drugs differently. Clayton used the recent finding that women respond differently to nicotine patches as one example. “Using male animals and cells is by and large the status quo right now,” she told The Verge, despite the fact that “sex is a fundamental variable that should be considered from the very start.” Scientists often use male mice by default partly because it was how they were trained in animal research, but also because of fears that...

The changes to preclinical research funding proposal requirements will be rolled out in phases, the first beginning in October. “To help scientists understand and adapt to the changing policies, we will create training modules on experimental design,” Clayton told The Verge. “We will also monitor compliance with new policies and perform data analysis to track our progress.”