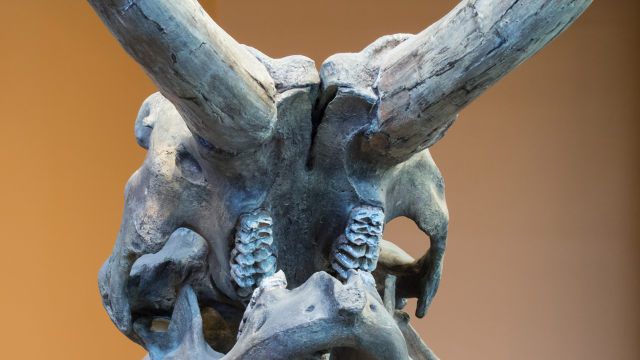 Head of a mastadon composite cast (Mammut americanum) at the San Diego Natural History Museum.WIKIMEDIA, RHODODENDRITESAn April Nature paper reporting the discovery of shattered mastodon bones near San Diego and claiming that the find means human ancestors were in the area some 130,000 ago, is making waves in the scientific community. Critics contend that the fractures in the mastodon bones—which the paper’s authors have suggested were the result of ancient humans hammering on the bones to get at the nutrient-rich marrow—could have been caused by the earth-moving equipment used to excavate the fossils in the 1990s.

Highway crews in California inadvertently dug up the mastodon bones along with large stones in 1992, while operating a road-grading machine to build a stretch of State Route 54 near San Diego.

“I have read that paper, and I was astonished by it,” University of Washington archaeologist Donald Grayson told...

The majority of archaeologists and anthropologists agree that humans migrated to North America via the Bering Land Bridge some 20,000 years ago and reached the southern tip of South America by around 15,000 years ago. If this latest conclusion is valid, it would push the date of the peopling of the Americas back by 100 millennia. “If you are going to push human antiquity in the New World back more than 100,000 years in one fell swoop, you’ll have to do so with a far better archaeological case than this one,” David Meltzer, an archaeologist at Southern Methodist University in Dallas, Texas, who—like Grayson—was not involved with the study, told Nature.

Critics have argued that the authors failed to rule out damage caused to the bones by construction equipment or natural causes. But one coauthor, who helped excavate the site, said that the bones were too deep in the Earth to suffer damage from construction machinery rolling across the surface. The mastodon remains and the stones that the authors claimed could have been used as hammers were “deeply buried. . . . There was no equipment damage to the heart of the site,” Thomas Deméré, a paleontologist at the San Diego Natural History Museum, told Science.

Vance Holliday, a University of Arizona archaeologist, agreed with other critics, saying that the Nature paper does not contain enough evidence to push back the timeline of hominins’ population of North America. “[The authors] present evidence that the broken stones and bones could have been broken by humans,” he told The New York Times. “But they don’t demonstrate that they could only be broken by humans.”