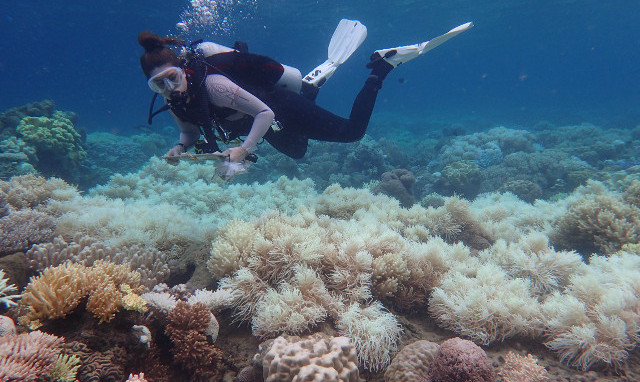 GREG TORDAThe bleaching of Australia’s Great Barrier Reef continues to be the worst such event in recent memory, according to a report from researchers at James Cook University, released yesterday (April 10). Last June, the team found that the subsiding El Niño had affected more than 90 percent of the reef, making it “the sickest we’ve ever seen,” Bill Leggat, associate professor with the ARC Centre of Excellence for Coral Reef Studies, told The Scientist at the time. Now, aerial surveys covering the entire reef system have revealed that, while bleaching had been most severe in the northern third, the middle third now has the most intense coral bleaching.

“The combined impact of this back-to-back bleaching stretches for 1,500 km (900 miles), leaving only the southern third unscathed,” Terry Hughes, director of James Cook’s ARC Centre of Excellence for Coral Reef Studies, said in a press release. “The...

This year’s aerial surveys imaged more than 8,000 km (5,000 miles) of the Great Barrier Reef, allowing the researchers to score nearly 800 individual coral reefs. The same approach has been used to examine the effects of three previous bleaching events in 1998, 2002, and 2016. Last year, these data were supported by underwater surveys, which were published last last month.

“The significance of bleaching this year is that it’s back to back, so there’s been zero time for recovery,” Hughes told The Guardian. “It’s too early yet to tell what the full death toll will be from this year’s bleaching, but clearly it will extend 500 km south of last year’s bleaching.”

With bleaching events becoming more common, the reef system will have less time to rebound. “This is really scary, because the Great Barrier Reef is losing its insurance policy,” Boston University marine biologist Randi Rotjan told New Scientist. “The scale of the devastation means that it is losing its potential to reseed the parts of the reef that were previously damaged.” 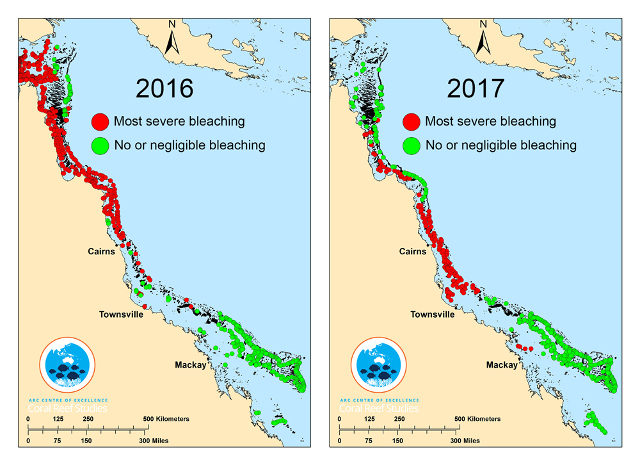