Titin was discovered four decades ago, but some physiology textbooks fail to recognize the important role it plays in muscle contraction.

Watching the elaborate motion of a pitcher throwing a baseball at more than 100 miles an hour illustrates the essential role of stretching prior to delivering large amounts of mechanical power. Similarly, practitioners of the millennia-old practice of yoga often seem to defy gravity with impressive feats of muscle stretching. By contrast, astronauts returning to Earth from long voyages display a significant loss of muscle tone, as if the prolonged absence of gravitational loading had robbed them of some essential source of mechanical power. Yet much of the biomechanics at the foundation of these familiar phenomena remains beyond the reach of modern scientific inquiry. Perhaps these gaps will be filled in when we develop a better understanding of how muscle tissue works.

According to most physiology textbooks, we already fully understand muscle contraction at the molecular level, and any further knowledge would...

Titin was discovered in the late 1970s by researchers Koscak Maruyama (J Biochem, 80:405–07, 1976) and Kuan Wang et al. (PNAS, 76:3698-702, 1979). By its placement within the muscle sarcomere, it was readily evident that titin operated under a stretching force during the muscle elongation that precedes every muscle contraction. But the standard bulk biochemistry techniques available at the time couldn’t interrogate this behavior because they lacked the ability to apply a uniaxial force. It wasn’t until the advent of single-protein force spectroscopy towards the end of the 20th century that researchers were able to study the behavior of individual titin molecules under physiological conditions.

By the mid-1990s, I had already built a modified atomic force microscope (AFM) to probe the mechanical forces involved in exocytosis. Then, while on a sabbatical semester from the Mayo Clinic in January 1997, I joined the physics laboratory of Hermann Gaub at Ludwig-Maximilians University in Munich. My plan was to continue my exocytosis project using the modified AFMs in Gaub’s laboratory. However, upon my arrival, Gaub proposed that we start instead with a recently discovered muscle protein that was huge and presumably easier to handle. With then–graduate student Matthias Rief, I was able to observe astonishingly long and detailed sawtooth-pattern traces of native titin extracted from bovine cardiac tissue as the AFM cantilever stretched the titin molecule, unfolding protein domains, which refolded when the force was released. In a few short weeks we had submitted a paper to Science that was published that same May (276:1109–12, 1997).

What we now know about titin should be sufficient to trigger a paradigm shift in our understanding of muscle contraction.

Upon my return to Mayo in late May 1997, I took a job as chair of the Department of Physiology and Biophysics, but I also told my laboratory that I had become mesmerized by titin and that we would switch from efforts to study the mechanics of exocytosis to developing this new field of inquiry. We built better AFM instruments, engineered the first tandem homopolyproteins to provide unambiguous mechanical fingerprints, and submitted grants to the National Institutes of Health to fund the venture.

We generated some truly novel findings on protein dynamics under force that are crucial to understanding how titin works in intact muscle tissue. This was no easy task. Our work on protein dynamics under force has been frowned upon by bulk-protein biochemists who use molar concentrations of harsh chemical denaturants to trigger unfolding, producing simplistic thermodynamic models that fail to explain our observations—such as the surprisingly large amount of mechanical work done by a protein folding while under a stretching force. This was simply due to the fact that the unfolded state configuration of a protein such as titin depends on the pulling force, requiring incorp-oration of polymer physics into the traditional models used by protein biochemists. After more than two decades of research, it is now clear that protein unfolding and folding under force is prevalent in biology and plays crucial roles in processes from protein translation to protein degradation and most things in between, as demonstrated by a growing group of scientists using our techniques. 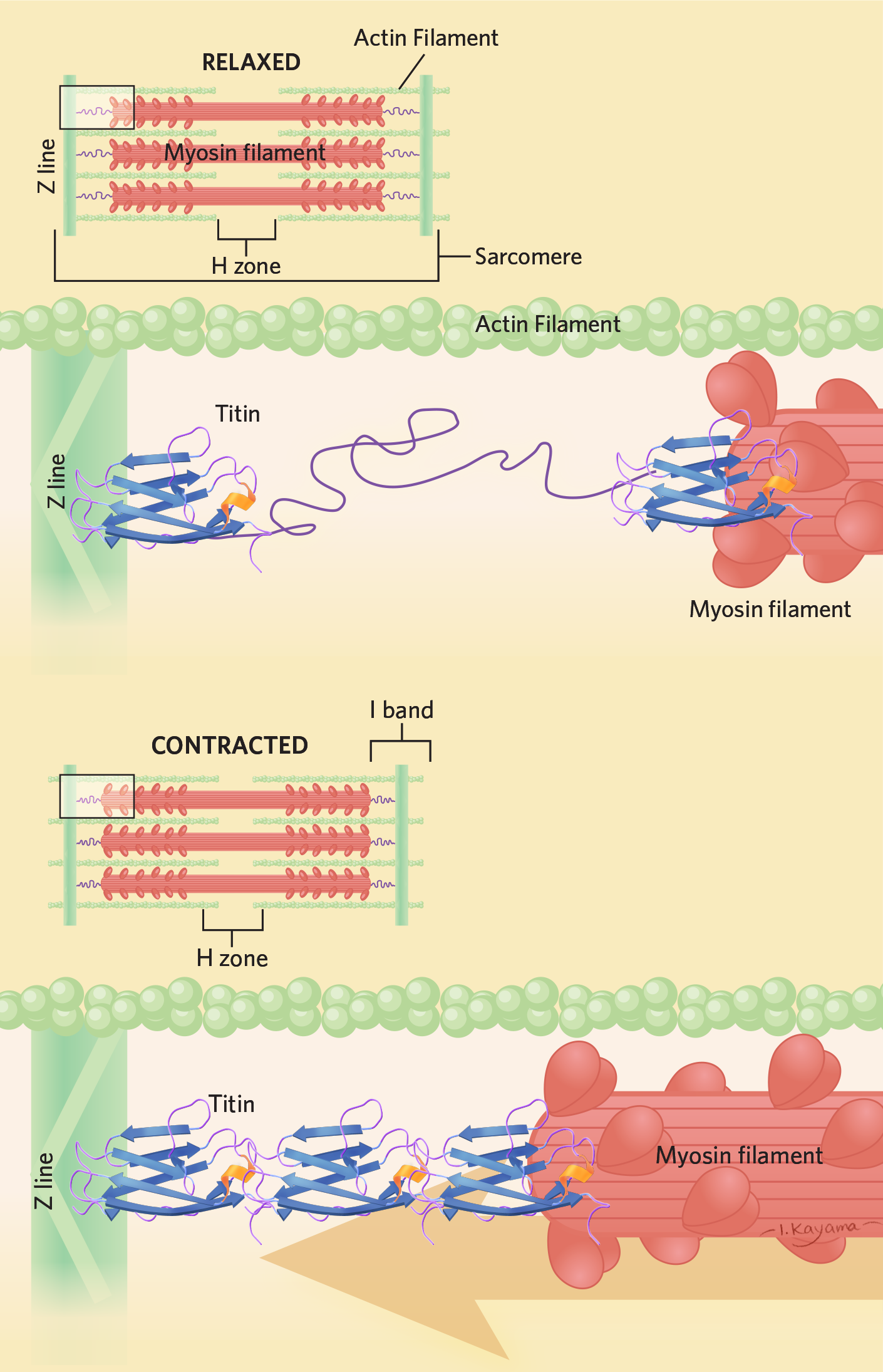 MUSCULAR DOGMA: The standard textbook model of muscle contraction includes only two main players, the filaments actin and myosin, which slide past each other, causing the sarcomere—the basic unit of muscle tissue—to shorten. Driven by ATP-powered myosin motors, sarcomere contraction causes whole muscles to shorten. In the past 40 years, researchers have explored the role of another filament: titin. Its emerging role in muscle function, unwinding during muscle relaxation (above) and folding during contraction (below), suggests that the ATP-driven motors also act as latches allowing titin to fold, providing a powerful boost to muscle contraction.
See full infographic: WEB | PDF
© ikumi kayama/studio kayama

Our most important observation is that proteins can readily fold against a pulling force, delivering a large amount of mechanical work that surpasses that generated by ATP-fueled motors. From this, it is evident how titin might operate in intact muscle tissues. Titin modules are arranged in tandem and can number up to 100 in the elastic I band region, which spans sarcomeres. Passive stretching, which occurs when muscle is relaxed and elongated during activities such as yoga, will unfold and extend titin modules under a wide range of forces and time scales. Holding a yoga pose for long periods of time results in storage of large amounts of potential energy in the stretched muscle through titin unfolding.

After more than two decades of research, it is now clear that protein unfolding and folding under force is prevalent in biology and plays crucial roles in processes from protein translation to protein degradation and most things in between.

By contrast, titin folding occurs over only a few pico-newtons in the physiological force range. Strikingly, this range matches the range of forces produced by active ATP-driven myosin motors. Given how these molecules are organized in the sarcomere, it seems likely that the activation of the ATP-driven motors relieves the force on titin, triggering spontaneous titin folding. This partnership suggests that the motors act as release latches for the elastic energy stored in titin during animal motion. Our most recent data show that in the physiological force range, the power output of disulfide-bonded titin domains matches the power output of the myosin thick filament, suggesting that these two sources of energy combine to deliver muscle power.

For a long time, the classical sliding filament model of muscle contraction developed in the 1950s seemed unassailable, and challenging this concept was deemed a fool’s errand. Yet this theory was developed without knowledge of the existence of the giant third filament: titin. Unsurprisingly, all the data obtained from intact muscle fibers were assumed to originate solely from the interactions between actin and myosin. Hence, it is long overdue to consider modifying the sliding filament theory to incorporate these striking mechanical features of titin, and to reexamine muscle mechanics experiments in the light of this new theory.

It speaks volumes about the state of science today that the muscle field has been reluctant to consider the large amount of force-spectroscopy data pointing to a role of titin in muscle contraction. Instead, titin has been relegated solely to the domain of muscle elasticity, with many researchers afraid to besmirch the purity of the standard model of ATP-driven muscle contraction. What we now know about titin should be sufficient to trigger a paradigm shift in our understanding of muscle contraction.

Julio M. Fernández is a professor and principal investigator in the Department of Biological Sciences at Columbia University.