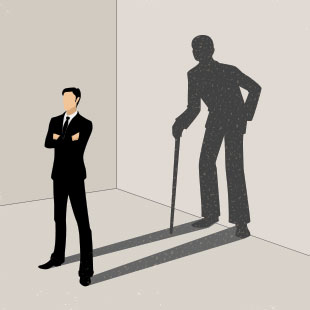 © STOCKILLUSTRATION/SHUTTERSTOCK.COMThe concept of aging is undergoing a rapid transformation in medicine. The question has long been asked: Is aging a natural process that should be accepted as inevitable, or is it pathologic, a disease that should be prevented and treated? For the vast majority of medicine’s history, the former position was considered a self-evident truth. So futile was any attempt to resist the ravages of aging that the matter was relegated to works of fantasy and fiction. But today, the biomedical community is rethinking its answer to this question.

The controversy has been fanned, to a great extent, by one Aubrey de Grey, a Cambridge University–trained computer scientist and a self-taught biologist and gerontologist. Over the past decade, de Grey has undertaken an energetic campaign to reframe aging as a pathologic process, one that merits the same level of attention as, say, cancer or diabetes. Although many...

“Aging” is a term we use to describe the changes our bodies undergo over time. Colloquially, we tend to refer to early changes, say from infancy to early adulthood, as maturation or development and reserve “aging” for changes that occur thereafter. The early changes are generally considered good: stronger muscles, wiser minds, and so on. The later changes are far less popular: thinning skin and hair, weakening bones, and other forms of decline.

In a biological sense, the mere passage of time is pathological.

To complicate matters, the human body comprises a number of different systems that each develop at its own pace. The nervous system seems to reach full maturity in our 20s, for instance, while the skeletal system may peak a decade later. Of course, this physiologic natural history is subject to environmental influence. For example, a diet rich in calcium and vitamin D, along with weight training, can increase bone density and strength. Nevertheless, these environmental factors ultimately act on a foundation that, beyond a certain age, is inexorably deteriorating. There is a finite limit beyond which environmental factors cannot save us.

The changes of aging vary in their specifics from one system to another, but common mechanisms are at work. For instance, wear-and-tear of joints results from depletion of articular cartilage, just as the thinning of skin is due to a loss of elastic connective tissue. Other age-related changes arise from errors in cellular activity or the accumulation of metabolic by-products, the probabilities of which rise over time.

As these natural changes proceed, they lead to readily recognizable disease. The accumulation of fat in blood vessel walls provides a particularly good demonstration of this. Lipids are an essential part of our diet, but as processed lipids continue to accumulate in vessel walls, these vessels harden and narrow, eventually failing to supply the heart with enough blood. If the narrowing blocks vessels entirely, the heart is starved of blood, causing heart muscle death, or heart attack.

This simplified example illustrates that perfectly normal processes that are critical to survival will quite naturally lead to disease. In a biological sense, the mere passage of time is pathological. Importantly, most of the early changes in this progression, such as high cholesterol, are symptomless. Yet they are precursors to life-threatening illness and are therefore considered pathologic entities in their own right, to be prevented and treated. The same can be argued of the more subtle and gradual damages of aging.

There are countless other conditions subject to this dynamic. They include some of the most common and debilitating ailments, such as osteoporosis, arthritis, stroke, diabetes, dementia, and even many forms of cancer. Given enough time, myriad diseases will afflict us as a direct result of the natural aging process.

We can and should view these diseases, whose prevention and treatment are standard medical practice, as the clinical manifestations of natural age-related changes. Doctors have long targeted such changes to prevent disease. For instance, by recommending their patients limit the fat and carbohydrate content of their diets or take statin medications, doctors have strived to stave off heart disease. In so doing they unknowingly have been battling aging itself.

Yet there are those who find this view of aging contentious, a reaction that likely stems from the misperception that the terms “natural” and “pathologic” are conflicting. There’s a common yet unwarranted sense that these two terms are mutually exclusive; that what is natural can only be right, and what is pathologic cannot be natural. This is untrue. Because “natural” typically describes what conforms to the usual course of events, and “pathologic” describes what is harmful, the question posed in the opening paragraph presents a false dichotomy. Both “natural” and “pathologic” describe aging fairly.

Thus, the controversy is largely semantic. If I were to replace the call for a “fight against aging” with an invitation to “combat age-related changes,” I would expect a far more positive response. A call to “prevent the early stages of disease” would surely receive virtually unanimous support. I contend that the three phrasings are synonymous.

Mutaz Musa is a physician in the Department of Emergency Medicine at Albert Einstein College of Medicine/Montefiore Medical Center, a health-care consultant, and an entrepreneur in New York City.