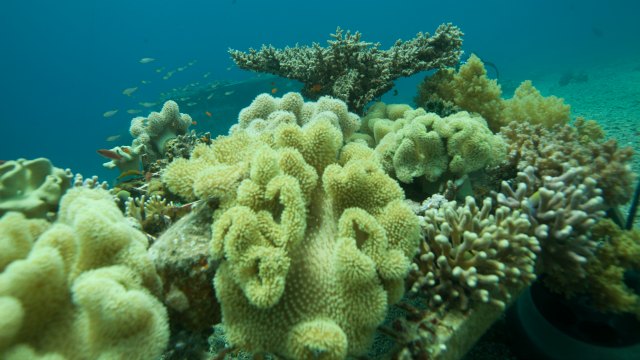 Corals in the Gulf of AqabaEPFL / ITAMAR GRINBERG As global temperatures rise, coral bleaching events, in which ocean temperature hikes cause corals to expel their algal symbionts, are happening again and again (reefs worldwide are in the midst of one). Symbiont loss deprives the corals of the pigments that give them both nutrients, via photosynthesis, and color.

Some corals, however, thrive in the warmer temperatures and decreased pH expected for ocean waters by century’s end, according to a study published yesterday (May 17) in Royal Society Open Science. Under these simulated warming conditions, samples of the reef-building coral Stylophora pistillata didn’t just survive; their symbionts gained pigments and produced more oxygen than under ambient conditions, indicating good photosynthetic health.

“Under this kind of scenario, you would expect a coral to bleach, and eventually die,” study author Thomas Krueger of Switzerland’s École Polytechnique Fédérale de Lausanne...

“This is a good sign,” C. Mark Eakin, coordinator of the National Oceanic and Atmospheric Administration’s Coral Reef Watch program, who was not involved in the study, told The Scientist. “It’s always good to find the ones that are the winners in considering the changes that are likely to happen in the future,” he said. 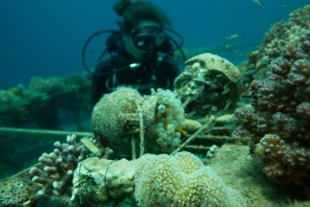 PhD student Jessica Bellworthy collecting corals in the Gulf of AqabaEPFL / ITAMAR GRINBERGAs the authors wrote, Caribbean coral reefs have already been degraded and some researchers doubt whether reefs will survive the century. It could be useful for predicting how coral populations will shift and for preparing for a warmer future, Krueger said, to identify warming-resilient species. Such species also provide hope that the direst predictions about how warming will affect corals might not be entirely correct.

Krueger and his colleagues had hypothesized that S. pistillata in the Northern Red Sea might be heat tolerant because it faced selective pressure to be so after the last Ice Age. In recolonizing the Red Sea from the Indian Ocean, these corals passed through the hot section of the Red Sea—what the authors call a “thermal bottleneck”—on their way to their current location in the Gulf of Aqaba, Krueger said.

To test that hypothesis, the researchers gathered samples of S. pistillata from the Gulf of Aqaba and, within aquaria, subjected them to increased temperatures and decreased pH to simulate global warming. For a month and a half, corals were kept at ambient spring temperatures (about 24 °C) or temperatures 5 °C higher. This 5 °C hike corresponds to 1 °C to 2 °C beyond the maximum summer temperatures that these corals typically experience. The researchers also varied pH, exposing some corals to the ambient, slightly basic pH of 8.1, others to a more acidic pH of 7.8, which Krueger said is a “worst-case scenario” prediction for end-of-century ocean acidification.

But the corals did not bleach, and the concentrations of chlorophyll within their algal partners increased, as did their oxygen output, as if they were photosynthesizing even more than under ambient conditions. 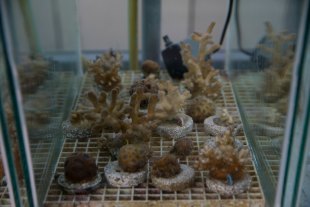 At the InterUniversity Institute of Marine Sciences in IsraelEPFL / ITAMAR GRINBERGFurther measurements, however, revealed that overall biomass did not change and carbon fixation decreased slightly at higher temperatures, countering the idea that more photosynthesis was taking place. The researchers are not sure how to resolve this paradox.

“Further work has to be done,” Krueger said, “but overall, the good news is that the coral as a whole was not negatively affected.”

“They’re thinking that this coral might essentially be like a gene bank,” University of Miami coral researcher Chris Langdon, who was also not involved in the work, told The Scientist. Perhaps if other corals in the Red Sea died out from global warming, these corals could repopulate the water body, he continued. “Everyone’s sort of grasping for good news and signs that corals will be resilient and sort of an optimistic reading of this paper would support that.”

However, Langdon, and Krueger, too, noted that it would be important to find out how these conditions affect coral reproduction. Eakin said that it might be difficult to apply results from the Gulf of Aqaba—“a very narrow, restricted body of water”—to corals in other locations “where there’s free exchange with surrounding populations.”

An important takeaway for Krueger is that these corals’ potential to resist the untoward effects of global warming that plague other coral species is all the more reason to protect them from other threats, such as pollution. “There should be a huge effort in protecting these reefs on a local scale,” he said.

Correction (May 19): We clarified paragraph six to note that the thermal bottleneck was in a hot section of the Red Sea, not in the Gulf of Aqaba. The Scientist regrets the error.