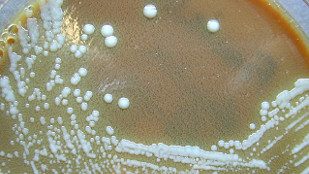 Francisella tularensis WIKIMEDIA, CDCThe list of potential uses for the CRISPR/Cas system grows longer by the day. Now fighting viruses may soon be added to that list, according to a study published today (April 27) in PNAS. Microbiologist David Weiss and immunologist Arash Grakoui of Emory University in Atlanta and their colleagues used a version of the Cas9 enzyme from the bacteria Francisella novicida to bind hepatitis C virus (HCV) RNA and prevent the pathogen from replicating inside human cells.

Last summer, another group showed that CRISPR/Cas9 could be used to seek out and excise HIV DNA from the genomes of latently-infected cells. The Emory team later found that F. novicida Cas9 (FnCas9) blocks HCV in a different way; it binds viral RNA in the cytosol such that, “if there are off-target effects, it wouldn’t be editing the genome,” said study coauthor Aryn Price, a graduate student...

FnCas9 also differs from other Cas enzymes because it doesn’t cut up RNA, it creates a roadblock for the proteins trying to copy RNA or translate it into viral proteins. Although this study is the first to target CRISPR/Cas9 to RNA within human cells, members of Jennifer Doudna’s lab at the University of California, Berkeley, last year reengineered Streptococcus pyogenes Cas9 to bind and cleave RNA in a test tube. Doudna’s group also identified another RNA-targeting Cas enzyme made by the bacteria Thermus thermophilus.

“There are lots of these Cas systems that exist in nature and we don’t understand them very well,” said Charles Gersbach, a biomedical engineer at Duke University in Durham, North Carolina.

Weiss and his colleagues inadvertently discovered this new use for Cas9 while searching for proteins associated with F. novicida infection in mice. Weiss discovered that the bacterium needs its version of the Cas9 enzyme to infect mice while he was a postdoc nearly 10 years ago, but at the time did not know what the protein did. As the DNA-editing prowess of Cas9 enzymes from S. pyogenes and other bacteria came to light, Weiss’s thinking about FnCas9’s role began to change. “Given what was known about Cas9, it was perplexing how it could contribute to infection,” he told The Scientist.

While working in Weiss’ lab, Timothy Sampson—who is now a postdoctoral researcher at Caltech—found that FnCas9 targets F. novicida messenger RNA (mRNA) to slow production of proteins that give the pathogen’s position away to the host immune system. To turn this RNA-targeting system against an invading virus, Weiss teamed up with Grakoui, whose lab studies human immune responses to HCV.

The team engineered a guiding RNA that delivered FnCas9 to a matching RNA strand in a region of the HCV genome that kick-starts replication and protein production. The researchers then programed human liver cells to make both the guiding RNA and FnCas9 before infecting the cells with HCV. After three days, only the cells with both components were able to control the virus. If either the guiding RNA or FnCas9 were made individually, the virus propagated.

Weiss and Grakoui next plan to turn their efforts to targeting other RNA viruses. One goal is to express FnCas9 and appropriate guiding RNAs in crops to protect them from devastating viruses.

“It seems like you could target anything,” said Brett Staahl, who studies CRISPR/Cas9 in Doudna’s lab. To his mind, the challenge will be getting the system into cells on a continuous basis. Unlike editing genomic DNA, which is a one-time permanent event, RNA targeting would have to be done continuously in order control viral infection.

“A lot of work needs to be done in terms of applying this,” said Gersbach. However, he added, given the usefulness of RNA interference (RNAi), which controls protein levels by targeting and cleaving mRNA, there may be a slew of potential uses for FnCas9 and other RNA-targeting Cas proteins.