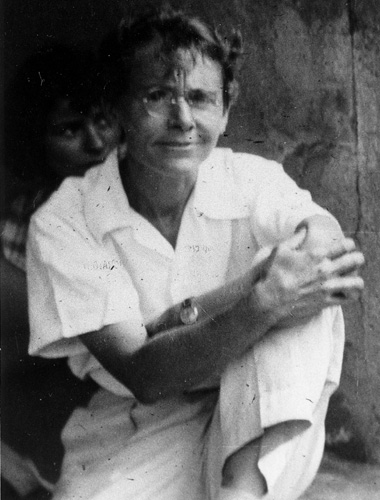 Barbara McClintock’s pioneering work in genetics began just two decades after biologists rediscovered Gregor Mendel’s work on heredity in 1900. After refining chromosome-staining techniques, McClintock became the first person to visualize and count the chromosomes of maize in 1928—a feat that jump-started her lifelong career in cytogenetics. In 1931, McClintock and her student Harriet Creighton used the characteristic structure of chromatin to demonstrate that genes corresponded to physical locations on chromosomes. Using an identifying knob on chromosome 9 as a guidepost, they localized certain traits on the chromosome, and demonstrated that chromosomes could “cross-over” and exchange genetic information. McClintock was awarded a Nobel Prize in 1983 for the discovery of transposable elements—snippets of the genome that can be prompted to switch places, often influencing gene expression in their new locations. Despite her prolific output, McClintock’s...

While working at the University of Missouri in the late 1930s, McClintock became frustrated with the inability to progress in her career, she later told friend and colleague James Shapiro, a geneticist at the University of Chicago. Watching less qualified and talented men advance past her began to sour McClintock on her chosen profession. “Barbara told me she considered quitting genetics,” says Shapiro. McClintock’s second career choice? Meteorology. December 1934 letter to geneticist Curt Stern and his wife Evelyn, where McClintock recounts her brief experience in Nazi Germany. Read the full letter PDF
US. NATIONAL LIBRARY OF MEDICINE

Despite early work that launched the field of maize genetics (colleague Marcus Rhoades attributed 9 of the 17 most important advances in maize genetics made at Cornell University between 1928 and 1935 to McClintock), her early postgraduate career was marked by uncertainty. McClintock had chosen to become a research scientist in an era when few women directed their own labs. In 1933, just after the Nazis gained power, she accepted a Guggenheim Fellowship to study in Germany with leading geneticists. McClintock, who had resisted joining any undergraduate sororities at Cornell in the 1920s after she realized that none of her Jewish friends would be welcome, was horrified to watch as the Nazis’ racist legislation began decimating German science.

After moving from Berlin to Freiburg, McClintock wrote a paper identifying the nucleolar organizing region of maize, a set of genetic loci which help organize the protein and RNA comprising the nucleolus. McClintock later described the paper as lacking clarity, which she attributed to the deep depression she experienced in Germany.  “I couldn’t have picked a worse time,” she wrote to Curt Stern, the Jewish Drosophila geneticist with whom she had intended to study, but who did not return to Germany after a sabbatical at Caltech. “The political situation and its devastating results were too prominent.” McClintock had learned Yiddish in college. She described to Shapiro how, years later, she would read the headlines of fellow passengers’ Yiddish newspapers while riding the New York subway.