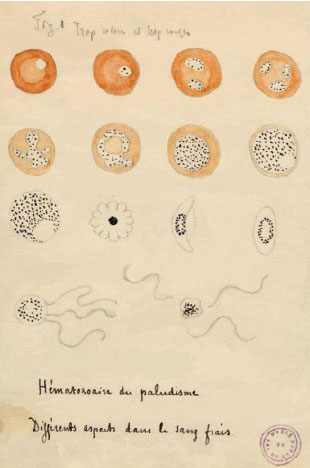 Laveran’s illustration of the various stages of in the life cycle of malaria parasites and their telltale pigment (black dots), published in the bulletin of the Société Médicale des Hôpitaux de Paris in 1881. As Francis Cox of the London School of Hygiene and Tropical Medicine writes in a 2010 review article in Parasites and Vectors, Laveran “suggested a course of events that began with clear spots that grew, acquired pigment and filled the corpuscle which then burst coinciding with the fevers associated with malaria.” At bottom is a male gametocyte expelling flagella-like microgametes, described by Laveran as “filiform elements which move with great vivacity.” © PAUL FEARN/ALAMY STOCK PHOTOThe idea that bad air rising from swamps caused malaria had a good run: at least two and a half millennia, from the time of the ancient Greeks until the mid-19th century. But as Louis Pasteur and Robert...

But in a military hospital in Algeria, French doctor Charles Louis Alphonse Laveran was taking a close look at a distinctive, granular pigment found in the spleens and other tissues of malaria victims and in the blood of infected people. In November 1880, he trained a light microscope with a maximum magnification of 400x on a drop of fresh blood from a malaria patient. Inside the red blood cells, he saw round, pigment-filled moving bodies with flagella-like protrusions.

Because bacterial flagella can’t be seen with a light microscope, “that really convinced him that he was looking at an animal instead of a bacterium or a fungus,” says Irwin Sherman, a professor emeritus at the University of California, Riverside. As Laveran watched, one of the moving bodies shed its wavy tails.

Given the limited power of his microscope, “it’s remarkable that the drawings that you see in Laveran’s paper are so essentially detailed,” says Sherman. “It’s testimony to his expertise as a microscopist.” Differential stains had not yet been invented, but Sherman says the “highly refractive” malaria pigment inside the protozoa would have been key to Laveran’s ability to detect them.

Laveran went on to examine the blood of hundreds of patients with and without malaria, and found the tiny organisms only in the malaria samples. But he faced an uphill battle in convincing other scientists that what he was seeing were not just decaying red blood cells, but protozoa, and that the single-celled organisms caused the disease. Ultimately, Laveran succeeded in persuading even Pasteur and Koch that his discovery was real, and in 1907 he was awarded a Nobel Prize for it.

Not all of Laveran’s views on malaria would catch on, however. He continued to insist, for example, that the disease was caused by only one protozoan species, long after evidence emerged that there were two. (It would ultimately turn out that there are four species of malaria protozoa.) He also disliked the term “malaria,” thought to be derived from the Italian term for “bad air,” because he considered it unscientific and superstitious, and instead referred to the disease by its alternative French name, “paludisme.”