Belgian biologist Albert Claude, working at The Rockefeller Institute for Medical Research (now The Rockefeller University) in the 1930s, was attempting to isolate a cancer-causing agent from chicken tumors when he noticed that the supernatants of lysed cells contained a strange aggregate, which appeared to be composed of large numbers of small particles with unusually high amounts of RNA. Claude named the mysterious particles “microsomes” and hypothesized in a 1943 Science paper that they “may be endowed with the property of self-duplication.” But because microsomes were too small and highly refractive to be observed using traditional light microscopy and staining techniques, Claude was unable to study them in further detail.

Luckily, Claude's Science publication came to the attention of microscopy specialist Ernest Fullam, who operated one of the few electron microscopes in the country for a chemical company in New York City. Fullam's superiors were eager to test out...

Using a new culture technique developed by Claude's Rockefeller colleague, Keith Porter, the team prepared chicken fibroblasts that were stretched thin enough to be penetrated by the microscope's electron beam, but that were not distorted or greatly altered by the process. In 1945 the trio published a description of their technique along with the first electron micrograph of an intact cell in the Journal of Experimental Medicine, shown here.

The unprecedented resolution achieved by the electron microscope revealed a highly organized subcellular world. "People just didn't believe that there were all these things in the cell," says Rockefeller University science historian Carol Moberg. Not only were Claude's microsomes visualized in greater detail, but also a lace-like network of fibers and vesicles that extended throughout the cytoplasm (circled). Further research by Porter and others would later reveal that the lace-like network was a new organelle–the endoplasmic reticulum (ER)–and that microsomes were actually ribosome-containing fragments of the ER. In the following decades, Porter, Claude, and other Rockefeller biologists used a biochemical approach to identify the functions of many of the structures they had observed. Their work pioneered the new field of cell biology, and garnered Claude a 1974 Nobel Prize. 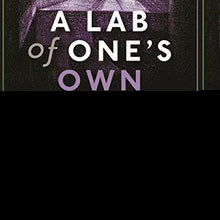