Acoustic forces can be used to differentiate adherent from non-adherent cells. 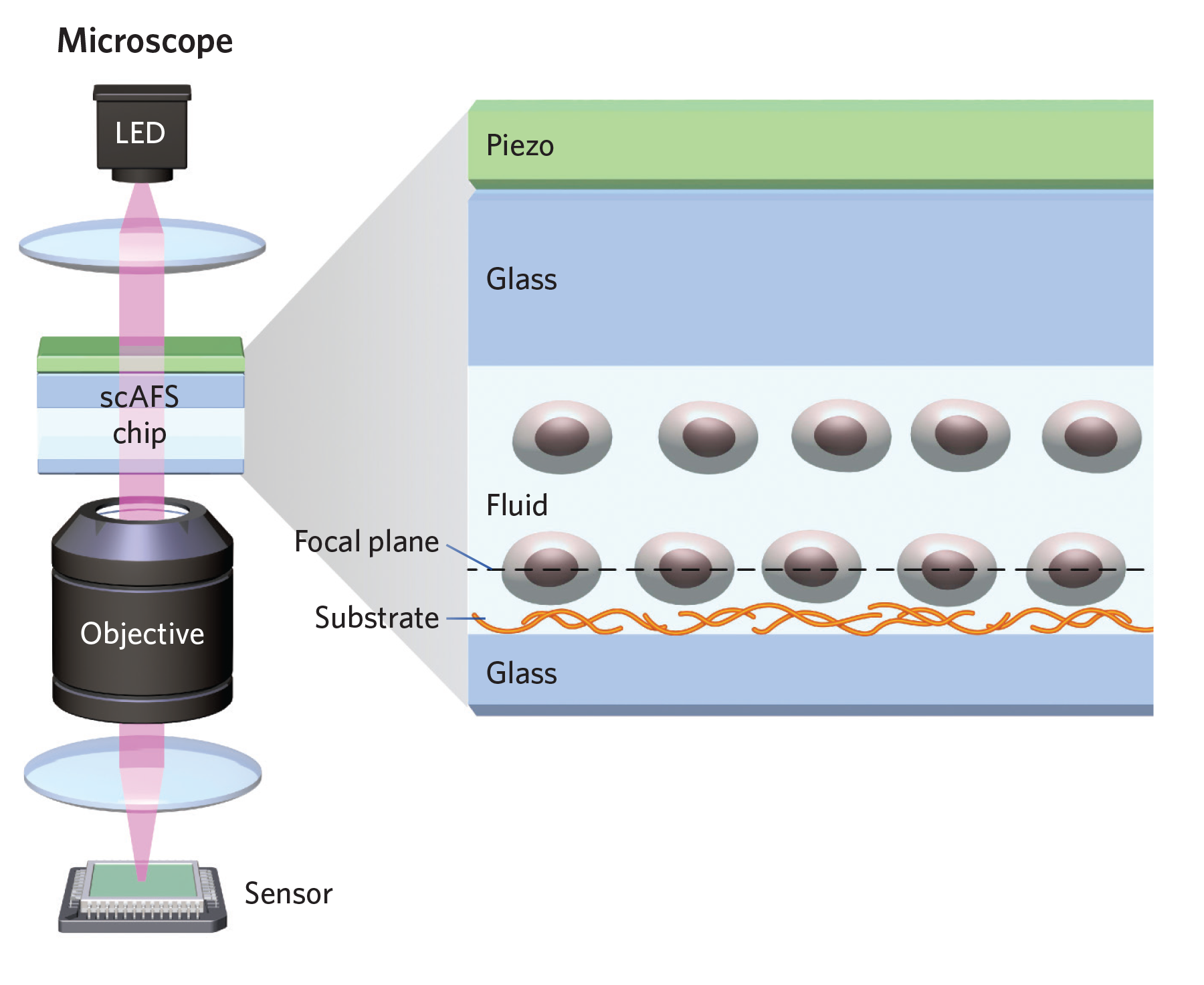 GET UP, GET ON UP: A piezo-produced acoustic standing wave fills the single cell acoustic force spectroscopy (scAFS) chamber, forcing non-bound cells to move up to the wave’s nodal plane and out of the microscope’s focal plane.
See full infographic: WEB | PDF
© george retseck

Just as music pulls some folks to the dance floor while others remain stuck to their chairs, sound can now be used to pull some cells loose from their substrate while other cells stay put. Cells attach and release from the extracellular matrix and from each other for a variety of physiological reasons. But existing methods to measure the intensity and kinetics of these interactions either lack precision or are exceptionally laborious, explains molecular biophysicist Gijs Wuite of Vrije Universiteit in Amsterdam.

While thinking of ways to achieve both accuracy and high throughput, Wuite says, he saw a movie showing microscopic organisms being...

So Wuite and colleagues developed single-cell acoustic force spectroscopy (scAFS), which uses acoustic waves to test whether cells are adhered to a given substrate (cells or molecules) and if so, how firmly. Cells are introduced into a buffer-filled, microscope-mounted microfluidic chamber, the bottom of which is coated with a substrate and is in the focal plane of the microscope. Once the cells have settled, an amplifier creates an acoustic standing wave in the entire chamber. Cells that are not bound to the substrate rise up to the sound wave’s nodal plane—where the wave’s force is at its minimum—and appear blurry as they leave the focal plane.

Increasing the amplitude of the acoustic wave exerts greater force, detaching loosely bound cells first and thereby revealing the strength of the different cells’ interactions with the substrate.

Wuite and colleagues have used scAFS to analyze interactions between T cells and fibronectin, an extracellular matrix protein. Such interactions, when they occur along blood vessel walls, allow T cells to slow, stop, and exit the vessel into neighboring tissue. In their proof-of-principle experiments, the researchers showed that the T cells’ activation led to faster fibronectin binding, while the cells’ adhesive strength, once they were attached to the protein, remained the same after activation.

“This device is particularly nice as it can make these measurements on many cells simultaneously,” says Bruce Drinkwater, an ultrasonic engineer at Bristol University in the UK who was not involved in the study. It’s also “quite a general-purpose platform that I think can be used in a multitude of ways.” (Cell Rep, 24, P3008–16, 2018)