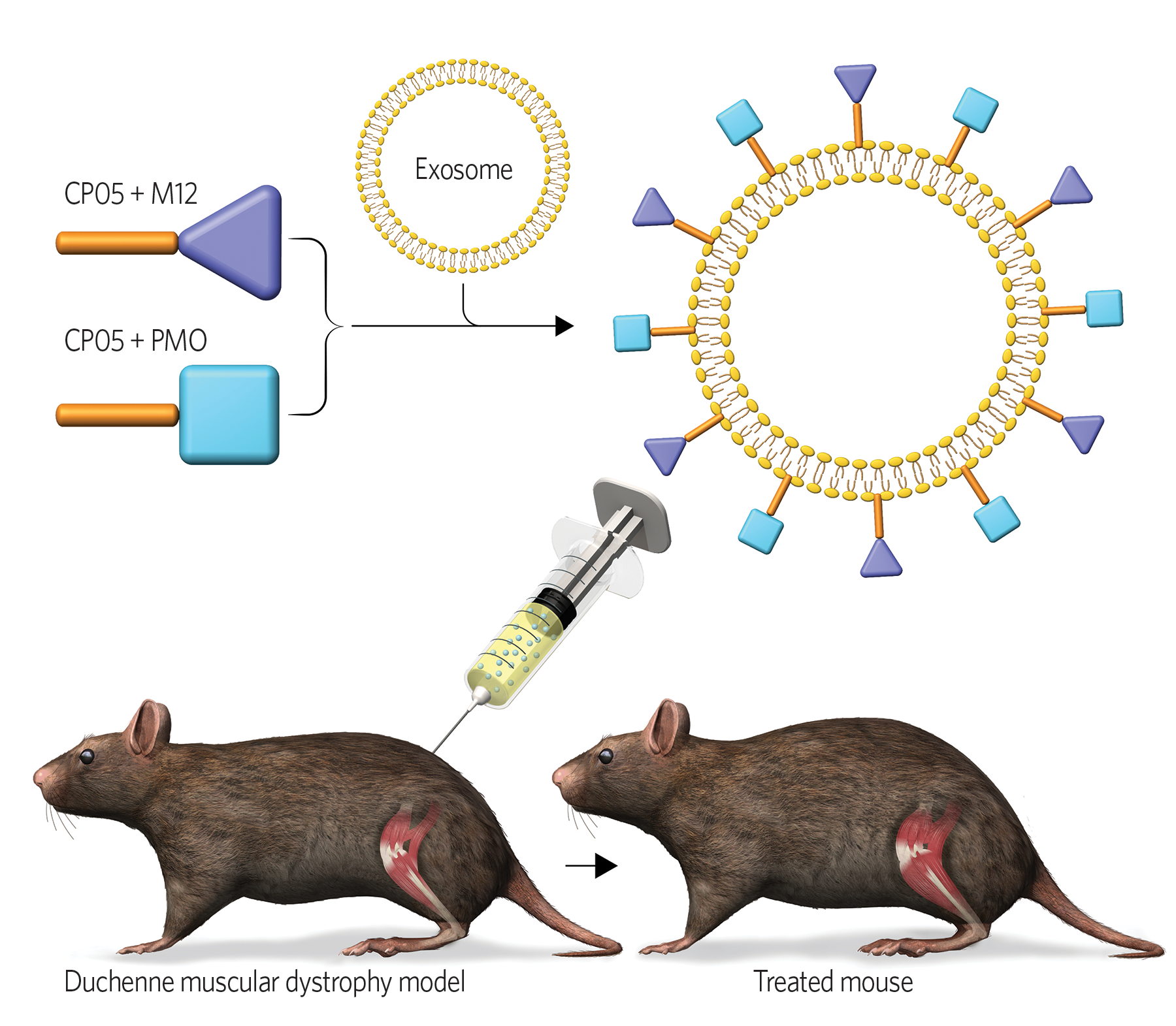 TISSUE-TARGETED THERAPEUTIC EXOSOMES: To treat a mouse model of Duchenne muscular dystrophy, molecules of the exosome-binding peptide CP05 are linked either to the muscle-targeting peptide M12 or an oligomer (PMO) that corrects a splicing error in the gene for dystrophin. These two conjugate peptides paint the surface of exosomes from cultured mouse cells. When injected into the mice, the exosomes home to muscle, where they deliver the oligomer, boost functional dystrophin levels, and improve muscle function. See full infographic: WEB | PDF
© george retseck

Released from almost all cell types, found in blood and other bodily fluids, and thought to play a role in cell-to-cell communication, the tiny vesicles called exosomes are garnering a great deal of research interest both as potential diagnostic tools and as vehicles for drug delivery. Many researchers are developing methods for capturing, modifying, and tissue-targeting exosomes. One such tool—the protein CP05—may accomplish all...

Haifang Yin of Tianjin Medical University in China and colleagues discovered CP05 in a search for proteins that bind CD63—a transmembrane protein abundant on the surface of exosomes. They’ve used this interaction to not only isolate exosomes from human serum via CP05-coated magnetic beads, but also to load cargo onto exosomes and send them to various tissues in mice.

To accomplish the latter, the team created peptide chimeras of CP05 with the tissue-targeting peptides M12, RVG, or SP94 to direct exosomes to muscle, brain, or subcutaneous tumors, respectively. They also delivered an oligomer that corrects a splicing error in dystrophin to the muscles of mdx mice (which display the murine equivalent of Duchenne muscular dystrophy symptoms). Both expression of functional dystrophin protein and the grip strength of the animals increased.

The use of CP05 is “an interesting concept,” says Pieter Vader of the University Medical Center Utrecht, in the Netherlands, because “it circumvents the whole issue of having to engineer cells.” Producing exosomes targeted to specific tissues usually involves genetic engineering of the cells from which the exosomes are to be collected, Vader explains. But with Yin’s system, “[you] just click something on that steers exosomes toward certain tissues.”

While the results of the targeting experiments are “very impressive,” adds Vader, who was not involved with the research, it’s unclear whether the CP05-coated magnetic beads would be preferable to existing methods for isolating exosomes, such as centrifugation, size exclusion chromatography, and immunoaffinity.

“What we have is a technology that can deliver cargo specifically in vivo,” says Yin. The next step is “to partner with researchers who have specific therapeutic cargoes for specific diseases to see if we can help them.” (Sci Transl Med, 10:eaat0195, 2018)