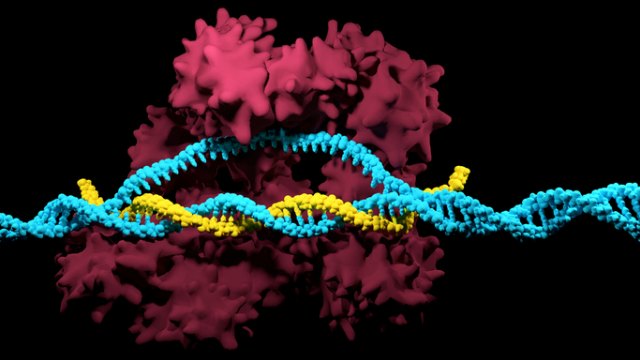 ISTOCK, MELETIOSVERRASCRISPR doesn’t work very well in human cells whose DNA-damage response is working normally. Instead, the genome-editing method selects for cells with a faulty response—one tied to cancer, according to two studies published today (June 11) in Nature Medicine.

“It’s something we need to pay attention to, especially as CRISPR expands to more diseases,” Sam Kulkarni, the CEO of CRISPR Therapeutics, which was not involved with either study, tells STAT News. “We need to do the work and make sure edited cells returned to patients don’t become cancerous.”

In one study, researchers found that the inhibition of p53, which organizes a DNA damage response, made CRISPR more efficient in a human cell line. “However, inhibition of p53 leaves the cell transiently vulnerable to the introduction of chromosomal rearrangements and other tumorigenic mutations,” they write in their report. This means that the cells in which...

Separate experiments by investigators from Novartis found that human pluripotent stem cells often succumbed to the double-strand breaks caused by Cas9 during genome editing, and this was due to p53 likely prompting cells to self destruct. “Our results indicate that Cas9 toxicity creates an obstacle to the high-throughput use of CRISPR/Cas9 for genome engineering and screening in hPSCs,” they write in their study. In other words, CRISPR is preferentially killing off cells whose p53 pathway is intact, leaving behind cells with p53 disabled and therefore at risk of turning into a tumor if given to a patient.

It’s not clear whether the freak-out is warranted. As STAT notes, the Novartis paper has been available as a preprint for months; the studies only looked at Cas9 and not other nucleases; and the p53 issue doesn’t appear to apply to cutting out genes, only to replacing them.

“We don’t want to sound alarmist, and are not saying that CRISPR-Cas9 is bad or dangerous. This is clearly going to be a major tool for use in medicine, so it’s important to pay attention to potential safety concerns,” University of Cambridge’s Jussi Taipale, a coauthor of one of the studies, says in a press release. “Like with any medical treatment, there are always side effects or potential harm from treatment and this should be balanced against the benefits of the treatment.”