ABOVE: A 75-mm-long Melanocetus johnsonii female with a 23.5-mm-long male attached to her belly
EDITH A. WIDDER

Krøyer’s deep-sea anglerfish, Ceratias holboelli, does not spawn, copulate, or do anything a fish would ordinarily do to mate. Instead, the male—just a few inches long—clasps onto the comparatively gigantic female’s body and never lets go. Slowly, his body morphs into hers, his cells becoming hers, including his testicles, which are used to make offspring. As he vanishes, two individuals become one—taking the concept of monogamy to a new level.

The sub-order of deep-sea anglerfish, composed of nearly 170 known species, arguably displays the most dramatic mating habits in the animal kingdom. In some species, males only temporarily attach to females and then part ways. In others, such as C. holboelli, males permanently “fuse” with females, or females absorb multiple males—in some cases up to eight at a time.

Among the many mysteries surrounding these deep-sea rendezvous—they were only captured on camera for the first time in 2018—is an immunological one. In virtually all other adult vertebrates, introducing tissue from one individual into another would provoke a powerful immune response attacking the foreign cells. Why don’t the female anglerfish, immunologically speaking, reject these parasitic males?

A new genomic analysis of 13 anglerfish species published today (July 30) in Science provides some clues. The genomes of species that temporarily or permanently fuse with their mates have undergone radical alterations of key genes that underpin adaptive immunity—a branch of the immune system responsible for the rejection of foreign tissue—making some of them the first known instances of vertebrates that effectively lack an adaptive immune system. Over the course of evolution, changes in genes involved in antibody production and cytotoxic T cell responses may have paved the way for the animals’ strange reproductive habits, while for scientists it raises questions about how the fish defend themselves against pathogens in the deep sea.

“It’s quite shocking,” remarks geneticist Elizabeth Murchison of the University of Cambridge who wasn’t involved in the study. “I suppose we shouldn’t have too many preconceptions about what is and isn’t possible in nature. Evolution produces all sorts of wacky outcomes, and this is one of them.”

Immunologist Thomas Boehm and his colleagues at the Max Planck Institute of Immunology and Epigenetics in Germany long wanted to know how some anglerfish species can form bodily fusions between individuals, and set out to do an analysis of the animals’ genomes. Biological samples from the deep sea are hard to come by, but with the help of ichthyologist Theodore Pietsch, an expert on deep-sea anglerfishes at the University of Washington, the team was able to obtain tissue samples from several specimen collections.

Boehm and his colleagues sequenced the DNA from 31 specimens, representing 13 species of deep-sea anglerfish. That included four species that mate by temporary attachment and six species that form permanent fusions—three of them in a one-to-one fashion, and three that have multiple males fuse with a single female. The team also included three control species from other anglerfish groups in which males never attach to females.

The team examined a handful of well-characterized genes known to be key players in the adaptive immune response. First, they looked at genes that encode the fishes’ major histocompatibility complex (MHC) class I and II proteins, cell surface molecules that differ between individuals and enable T cells to distinguish the body’s own cells from foreign ones. It’s the MHC class I receptors that drive cytotoxic T cells to attack foreign cells in tissue transplant settings.

Interestingly, the six permanently attaching species all showed unusual, significant alterations to their MHC genes, which were even more severe in the three species in which multiple males fuse with each female. The researchers also found alterations in the genes encoding receptors of the cytotoxic T cells that interact with the MHC class I proteins. In all six permanent attachers, for instance, two genes that encode such receptors were entirely missing, suggesting that dismantling the cytotoxic reactivity of T cells might be necessary to allow different anglerfish individuals to mate.

A 46-mm-long female Photocorynus spiniceps with 6.2-mm-long parasitic male fused to her back
Theodore W. Pietsch, University of Washington

Because antibodies directed against foreign tissue are also known to cause complications in patients during tissue transplants, the team also looked at certain genes that underpin antibody generation. Although many of these genes seemed to be intact in most of the anglerfish species, they found that aicda, which plays an important role in creating specific antibodies, was effectively absent in all 10 species that form temporary or permanent attachments, whereas it was intact in the three control species. Certain rag genes, which are also involved in antibody formation, had amassed deleterious mutations in species that mate as groups of males, whereas those genes were relatively intact in species that pair in a one-to-one fashion such as C. holboelli.

Overall, the more extreme attachment between mates, the more extreme the changes to adaptive immunity genes appeared to be, the team notes. While temporary attachment only seemed to require reduced antibody responses, permanent one-to-one fusions seemed to be associated also with the curtailing of cytotoxic T cell function. In the case of multiple mates, this was marked by even more changes, such as the blunting of antibody responses, and the loss of rag genes.

To University College London immunologist and virologist Ariberto Fassati, who wasn’t involved in the study, the results are astonishing. Many scientists assume that the immune system, once established, would evolve only in one direction, “towards becoming more adaptive and more specific,” Fassati says. “But this looks like you can actually lose arms of the adaptive immune system . . . if evolutionary pressures are justified.” To his knowledge, the deep-sea anglerfish species are the first instances of vertebrates having lost such a huge branch of their adaptive immunity.

In many other vertebrates, removing parts of the adaptive immune system has catastrophic consequences. Babies born with mutations in the rag gene, for instance, are severely sick or die quickly if they don’t receive treatment through a bone marrow transplantation, Boehm notes.

One reason why the adaptive immune system is thought to be so crucial is because many pathogens and parasites have learned to outsmart the less-specific, front-line innate immune defense, Fassati says. For instance, many viruses, including the culprit of the ongoing COVID-19 pandemic, SARS-CoV-2, can stem the body’s production of inflammation-driving interferons, which are part of the innate immune defense, he adds. The fact that some anglerfish are apparently getting along fine without a fully intact adaptive immune system is “quite remarkable.”

This discovery raises the question of how they do manage to defend themselves from pathogens in the deep sea. Boehm speculates that either the fish must have evolved some other immune system entirely, or perhaps they’ve found ways to ramp up their innate immune machinery to compensate for the lack of an adaptive immune response. Maybe they could achieve this by continuously expressing interferons, he speculates, placing their bodies on constant alert and making it harder for viruses and other pathogens to establish infections. To prove that, he’d need fresh tissue where he could examine gene expression.

“I’m desperately looking forward to obtaining animals where I could extract RNA and look for expression levels of these . . . interferon-related genes,” he says. Finding out how some anglerfish do cope after losing adaptive immunity could be useful in finding treatments for immunodeficient patients, he adds.

To him, the results also pose a chicken-or-egg dilemma: which came first, the modifications to the genetic architecture underpinning adaptive immunity or the fusion mating strategy? One of the species he examined may offer a clue. Gigantactis vanhoeffeni is thought to mate through temporary attachment, yet it shows some of the same alterations to immune genes as permanently attaching species. Boehm says he thinks G. vanhoeffeni could possibly be “en route to permanent attachment” evolutionarily. “It seems that some changes to the immune genome have to occur before this permanent fusion can really set in. It seems that there is some as yet unknown evolutionary pressure of some sort that [first] causes these genes to go extinct or defunct.”

Gil Rosenthal, an evolutionary biologist at Texas A&M University, says he wonders what those evolutionary pressures could be. Deep-sea anglerfish are extremely sexually dimorphic, he notes in an email to The Scientist. “Females are these nightmarish light-bearing fanged monsters, and males are tiny little things with a huge testis and a huge nose.” The females are probably sparse in the deep sea, so it’s likely that the males spend a lot of time looking for them, he explains. When a male finally finds a female, it would be in its interest to stick close. If it happens that the female has conflicting interests—such as eating the males—it could set up the fish for “sexual conflict.” That situation could somehow lead to a genomic tug-of-war over the immune system, Rosenthal speculates. “I wouldn’t be surprised if some of the wreckage of the immune genome comes from sexual conflict.”

It wouldn’t be the first example of a trade-off between sexual behavior and immune system function, he adds, noting that in vertebrates, testosterone can depress immune system function and enhance male sexual displays. However, “that so much of it is shut down or remodeled in [deep-sea anglerfish] is just wild!”

To Rosenthal and Murchison, the results underscore how the genomics revolution has enabled researchers to venture beyond well-understood model organisms in labs and explore the different adaptations of life on Earth. “There’s so much to be learned about not just immunity, but all of biology, by exploring evolutionarily divergent lineages,” Murchison says. “And you never really know what you’re going to find because nature is so broad and diverse and there’s so much adaptation to very specialized niches.” 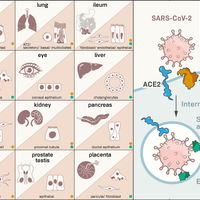