For biologists, the quintessential which-came-first debate is not chicken or egg, but rather, sponge or ctenophore. The argument over which of these groups represents the earliest branch from the ancestor of all animals has raged for more than a decade, with heated arguments coming from both sides. Now, a new chromosome-level ctenophore genome published in the November volume of G3 Genes|Genomes|Genetics may offer the opportunity to settle once and for all whether the Porifera or the Ctenophora evolved first. “One method that could possibly resolve the phylogenetic position of ctenophores and sponges is comparing whole-chromosomes,”  the researchers wrote in their paper.

With their lack of true tissues and organs or even symmetry, sponges might seem like the obvious choice for the oldest animal group. But starting back in the early 2010s, a vocal group of researchers armed with genomic data began to argue that despite their apparent complexity, ctenophores (commonly referred to as comb jellies) are actually more ancient. Proponents of a sponge-first topology clapped back, of course, and the back-and-forth continues today. 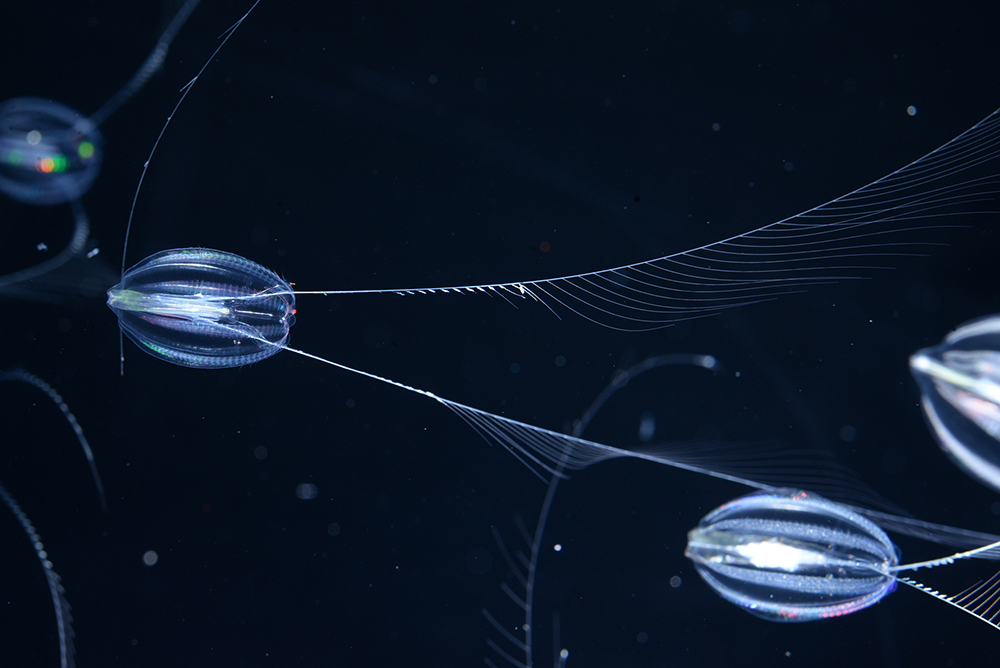 Hormiphora californensis is among the species raised for research and display by the staff at the Monterey Bay Aquarium.
Darrin Schultz © 2021 MBARI

One potential line of evidence that has remained unexamined is a phylogenomic comparison of whole chromosomes. Chromosomal analyses have yet to be performed because the two published ctenophore genomes lacked chromosome-level resolution. In fact, prior to this study, it wasn’t clear what the chromosomes of ctenophores looked like—there were no published karyotypes for any comb jelly. So before diving into the genome, the team of scientists led by Monterey Bay Aquarium Research Institute (MBARI) researcher Darrin Schultz took advantage of the aquarium’s ability to culture the California sea gooseberry (Hormiphora californensis) to generate the first karyotype for the group. The animal, it turns out, has 13 paired chromosomes, which is exactly what was predicted for a related ctenophore.

The team generated an initial draft genome from PacBio long reads and polished using Illumina short paired-end reads. But to place the DNA in chromosomal context, the team turned to Hi-C chromatin conformation capture. Hi-C provides insights into chromatin structure because before sequences are generated, the native DNA is treated with formaldehyde, which generates crosslinks between interacting pieces of chromatin. When the DNA is digested, these crosslinks initially stay intact, keeping together chunks of sequence that physically interact (mostly within chromosomes). Attached sequences are then fused to one another, creating chimeric sequences that maintain the genomic spatial context of intact chromosomes. In the case of H. californensis, for instance, a heat map of Hi-C interactions recapitulates the 13 chromosomes visualized microscopically.

One of the most important tools in #genome assembly is the Hi-C map: a self-to-self map of interactions between different pieces of DNA in 3D space.

Here, you can see the 13 discrete units that correspond to the 13 chromosomes in the Hormiphora genome! https://t.co/i3Q6a6YxE7 pic.twitter.com/lWLN5BUsiB

The team also provided an initial, manually curated annotation for their new genome. This revealed thousands of nested intronic genes: genes that exist within the introns of other genes. In fact, 484 were doubly nested. Research suggests that nesting may allow for more fine-tuned transcription control, and therefore may have played an important role in the evolution of complexity. Indeed, such nesting of genes is seen in plants and in animals, including in humans, nested intronic genes are largely absent from fungi and single-celled eukaryotes. The authors note that finding so many of these genes within genes in this ctenophore—on par with the degree of nesting seen in primates—may suggest the mechanism evolved early on in our lineage.

While the researchers didn’t run whole-chromosome-level phylogenomic analyses to see if the H. californensis genome adds to the support for a ctenophore-first evolutionary history, such analyses are now possible, as a chromosome-level assembly for a sponge species was published last year.

Japanese stiltgrass has spent more than a century wreaking havoc on the native ecosystems of the eastern US, yet the biological basis of its invasiveness has remained elusive. A high-quality, chromosome-level genome assembly for the species, published in the November volume of Genome Biology and Evolution, provides insights that could prove valuable to resource managers and evolutionary botanists alike.

While the first draft of the chickpea genome was published eight years ago, a massive sequencing effort of more than 3,000 varieties has produced a different genomic first for the species: a pangenome. As The New York Times explains, this catalog of intraspecies genetic variation sheds light on the origins and domestication history of this important crop, and may help agricultural scientists breed or engineer new varieties that are able to withstand whatever climate change throws their way.

Genome Spotlight is a monthly column for The Scientist’s Genetics & Genomics newsletter that highlights recently published genome sequences and the mysteries of life they may reveal.