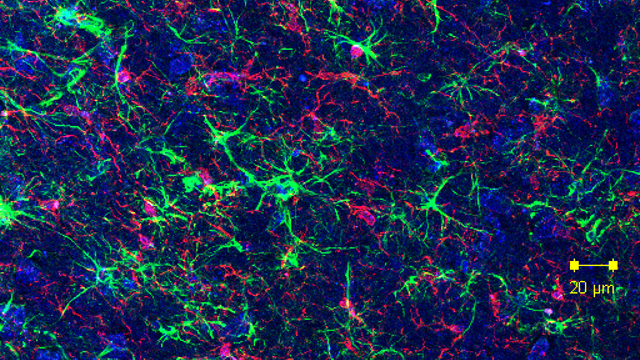 In a study published today (December 1) in Cell, a team led by Timothy Sampson and Sarkis Mazmanian of Caltech demonstrate that gut microbiota promote neuroinflammation and motor deficits in a mouse model of Parkinson’s disease. The researchers also identify a possible mechanism for the influence of intestinal microbes and on the development of the disease in mice.

“It’s a beautiful study,” Justin Sonnenburg of Stanford University School of Medicine, who did not participate...

Sampson, Mazmanian, and colleagues used transgenic mice that overexpress human α-synuclein, the protein that forms the insoluble aggregates that are a hallmark of Parkinson’s disease. These mice exhibit deficits in motor function and gut motility.

Transgenic animals raised germ-free or treated with antibiotics performed better at motor tasks and maintained fecal output, as compared to those with typical microbiota, the researchers reported. Mice without intestinal microbes or those receiving antibiotic treatment also developed fewer α-synuclein aggregates in their brains than did their counterparts with intestinal microbes. In other words, in transgenic mice without intestinal bacteria and in those treated with antibiotics, both Parkinson’s-like symptoms and brain pathology decreased. 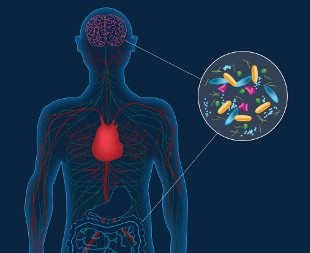 Artist’s concept depicting microbes in the gut instigating changes in the brain that can lead to Parkinson’s diseaseCALTECHMazmanian pointed to the complementarity of research analyzing the microbiota of human patients with Parkinson’s disease and the present study, on mice, which allowed a deeper look at α-synuclein pathology, immune system activation, and the role of microbial metabolites. “All of that allowed us to start to get insight into the mechanism by which the microbiome may be contributing to symptoms of Parkinson’s,” he said.

In order to address this question, the authors transplanted human gut–derived microbes from patients with Parkinson’s disease or from healthy controls into germ-free mice. Microbiota from patients with Parkinson’s disease promoted greater motor dysfunction than microbiota from matched controls in transgenic mice, the researchers found. Wild-type mice did not develop motor dysfunction in either transplant condition. Taken together, these findings suggest that Parkinson’s disease–associated microbes can promote symptoms in genetically predisposed animals.

“This is a landmark study because it’s the first proof of concept that you can induce Parkinson-typical symptoms in mice by transferring bacteria from Parkinson’s patients into those mice,” said Filip Scheperjans of Helsinki University Hospital, who was not involved in the work.

“People have been talking about Parkinson’s disease and the gut for some time, so that part isn’t that new, but the relationship with the microbiome is quite new,” said John Cryan of University College Cork, Ireland, who also was not involved in the work.

Scheperjans and Sonnenburg highlighted the need to further investigate the role of short-chain fatty acids, which are generally believed to be beneficial in humans, in contrast to the pro-disease role these metabolites seem to have played in this study.

Sampson said he plans to explore the composition of gut microbiota in people with Parkinson’s disease in order to understand whether there are specific microbial species that instigate disease and whether there might be treatment potential in dietary or other modifications.

Mazmanian also has his eye on possible treatments. To that end, he recently cofounded a company called Axial Biotherapeutics. “I don’t think it’s inconceivable to at least think about developing next-generation probiotics for Parkinson’s,” he said.