There’s a lot that scientists don’t know about the gut microbiota, and when it comes to the viruses present there they know even less. To learn more, researchers have monitored the gut viromes of nine people for a full year and that of one person for more than two years. They find that many types of bacteriophages are present and that each individual’s virome is stable over time and different from that of the other subjects.

This study “generates an important database for phages in the gut,” says Corrine Maurice, a microbiologist at McGill University who did not participate in the work. “That’s a database that we just didn’t have, and so that data is going to allow us to formulate some really cool hypotheses going forward. It’s really providing us with tools to . . . look further into what these phages may be doing for our health.”

“It confirms recent reports that there is no such thing as a core gut virome shared between adult individuals, which is in contrast with the bacterial component of our microbiota where there are more members shared between humans,” Evelien Adriaenssens, who studies gut viruses at the Quadram Institute in the UK and was not involved in the work, writes in an email to The Scientist. “We need more studies on the gut virome like these to establish a baseline about what a healthy human gut virome looks like, taking into account differences in for example geography, ethnicity and lifestyle. After we know what is healthy, we can start looking at complex disease syndromes . . . and identify what changes in the virome can be used as a marker for disease.”

Andrey Shkoporov, a microbiologist at University College Cork, and colleagues set out to establish that baseline. “We thought, ‘Okay, before we embark on comparative studies of the virome in different health conditions, why don’t we look at the longitudinal stability and inter-individual variability of the gut virome between healthy human subjects,’” he tells The Scientist.

The research team collected fecal samples from 10 adults—four men and six women—every month for a year. From one female subject, they collected three additional samples at months 19, 20, and 26. Then they separated viral particles from fecal matter and cells and isolated and sequenced viral nucleic acids.

Because 99 percent of gut viruses are unknown to science, Shkoporov says, it was not possible to rely on existing viral sequence databases to figure out what was there. Instead, the authors assembled the reads into overlapping DNA sequences, predicted protein coding genes, and then tried to detect any similarities between proteins in databases with those likely encoded by the long stretches of DNA. “This can help to get a rough idea what kind of viruses we are dealing with,” Shkoporov adds.

The researchers reported yesterday (October 9) in Cell Host & Microbe that the individual viromes were stable over the 12 or 26 months of the study and diverse, meaning there were many types of bacteriophages present. While the subjects’ viral communities stayed consistent over time, each person’s complement of gut viruses looked different from that of the others.

“The individuals have very different viromes, but more closely related bacterial microbiome,” Adriaenssens tells The Scientist. “For me, this raises the question about what bacteriophages that are unrelated at the sequence level occupy the same niche in different individuals.”

The team also determined that the viromes contain a large proportion of virulent bacteriophages—those that destroy their bacterial hosts in order to reproduce—including crAss-like phages and members of the family Microviridae. Both these viral types have been predicted to infect common gut microbes.

“One of the next steps is unraveling the functional role of the main players in the virome,” Adriaenssens says. “We need to be able to link bacteriophages with their hosts, and to do that, we need good culturing systems for both the bacteria and the phage and the model systems to test them in.”

“We still don’t know how the virome and the microbiome interact within the human gut,” agrees Lori Holtz, a pediatric gastroenterologist at Washington University in St. Louis who was not involved in the study. These findings could also inform future studies investigating the microbiome’s role in development or disease, which “should include also the virome because, although we don’t exactly know how the two systems interact, there definitely is an interaction, and we need to understand that more,” she adds. 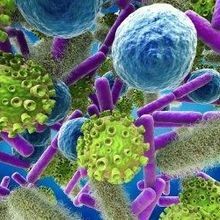