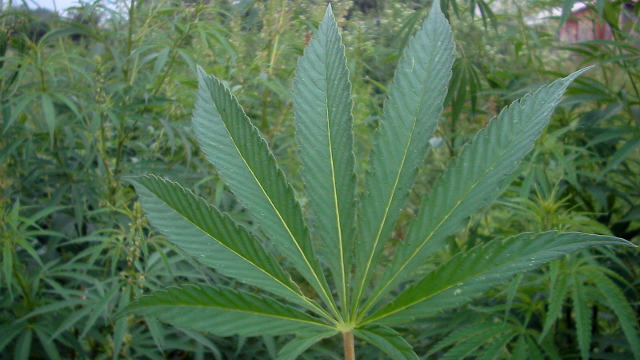 WIKIMEDIA, BOGDANMore and more Americans are using cannabis both for medicinal and recreational purposes, but scientists still know little about the drug’s effects on human physiology, according to a National Academies report released this month (January 12). Part of this knowledge gap owes to the fact that cannabis is classified as a Schedule I drug under the US Controlled Substances Act. In the eyes of the federal government, marijuana is a dangerous substance—on par with heroin—that “has no currently accepted medical use in treatment in the United States.” But researchers in Canada are not far ahead of their US counterparts, even though cannabis has since 2001 been functionally legal for medicinal use at the federal level there.

“I wish I could say that [legalizing medical marijuana] had led to more research” in Canada, said Mark Ware, a...

Michael Bostwick, a psychiatrist at the Mayo Clinic in Rochester, Minnesota, has also published extensively on the therapeutic effects of marijuana. He agreed that although federal illegality is a primary obstacle to studying cannabis in the U.S., there are other factors that make understanding the basic science behind the drug’s potential therapeutic effects a daunting prospect. “I’m not sure that the research can catch up with the social use, meaning this: that, at least within the current [US Food and Drug Administration] approaches to medication, which is how every other medication in our country is approved, there is no precedent and no model for, first, smoking a substance and, second, using a substance that is not pure but contains many, many different compounds in varying amounts.”

The Food and Drug Administration (FDA) has only approved three drugs for human use that contain active ingredients present in or similar to those in botanical marijuana. These are Marinol and Syndros, which contain a synthetic version of delta-9-tetrahydrocannabinol (THC, the main psychoactive component of marijuana), and Cesamet, which contains a synthetic cannabinoid that has a chemical structure similar to THC. Others are still in clinical trials, including Sativex, an oral spray that contains cannabis extracts that has been approved in 16 countries outside the U.S.

Ware suggested that instead of seeking to study smoked cannabis, researchers should shift to studying the therapeutic potential of extracts or derivatives of the plant or otherwise conduct research on alternative ingestion mechanisms, such as vaporization. “There’s obviously a lot of non-scientific development in the recreational market in some of these areas, with edibles and vaping, and all that sort of thing,” he said. “But I think if we can align some of that with therapeutic delivery systems, we could get away from the smoking. . .  I think that’s a positive direction, more of those studies showing that it mimics the smoked route but it’s clearly less dangerous than smoking.”

Although de- or re-scheduling marijuana to make it easier for researchers to obtain for study is unlikely (the Drug Enforcement Agency last year denied two petitions to reschedule the drug), US federal agencies have made recent attempts to make studying the health effects of marijuana somewhat less onerous. Last year, the DEA announced a policy change designed to increase the number of registered marijuana manufacturers that can legally provide the drug to researchers studying it. Previously, only the University of Mississippi, operating under a contract with the National Institute of Drug Abuse (NIDA), was cleared by the federal government to provide botanical marijuana to researchers. “NIDA supports this DEA decision to increase the number of farms eligible to grow marijuana for use in research, to potentially increase the variety and strains available to scientists,” an agency spokesperson told The Scientist this month.

While there is a lack of precedent for the FDA approving a smoked botanical drug, the agency said that it is committed to furthering research on marijuana. “We recognize and share an interest in developing therapies from marijuana and its components and have taken aggressive, coordinated action to do so,” FDA spokesperson Michael Felberbaum told The Scientist. “We continue to encourage work to assess whether there are appropriate and effective therapeutic uses of marijuana and its components and believe the drug approval process using scientifically valid and well-controlled clinical trials is the most appropriate way for this to occur.”

The FDA approved about 300 Schedule I research protocol licenses for research on marijuana or its constituent compounds in 2015 alone. And NIDA has assembled a large body of research on the harms of marijuana use and addiction. “NIDA’s mission has traditionally been to study the adverse effects of drugs and develop treatments for the devastating disease of addiction,” the agency wrote in an email to The Scientist. “This research has provided insights into the body’s cannabinoid system, and has opened new areas of research that could lead to therapeutic uses. We are very interested in any innovative research approaches to treat addiction or its related consequences—including exploring the therapeutic potential of cannabinoids.”

Bostwick contends, however, that the agency’s focus on the harms of marijuana—as is its remit—has not yet been offset with an effort to fund work that looks at the drug’s potential benefits. “It’s just not counterbalanced by the medical possibilities and developments, and constantly the two are pitted against one another. . . . You have to think in a little more complex terms than black and white, ‘it’s bad,’ ‘it’s good,’” he said. “In fact [marijuana] probably is bad and problematic in some recreational scenarios. And it could be potentially useful if it could be studied and adapted in scenarios that are used for developing new drugs.”

But Bostwick maintains that researchers seeking permission, funding, and material to study the therapeutic effects of marijuana are forced to jump through numerous hoops that turn many off the path altogether. “Our methods for studying, our funding mechanisms, our drug distribution mechanisms are all interlinked, and they all lead back to the federal government,” he said. “There isn’t a coherent, easy way for scientists to study the plant as a potential source of new pharmaceuticals.”

And things aren’t likely going to get better under the new administration, according to Bostwick. “From what little I’ve seen, there’s no particular reason to believe that the new president and his cabinet is going to be sympathetic towards marijuana as a medication,” he told The Scientist. “I don’t have any reason to believe our new president . . . is going to be easy on marijuana or that there’s going to be a whole lot of either wisdom or priority about declaring it something that needs to be studied.”

Ware, a Canadian, said he doesn’t know what to expect from the US in terms of its official stance on marijuana and research into the drug’s effects. But he remains hopeful. “I fundamentally hope that the science is what drives the policy and not something else,” he said.

“That National Academies report has identified a lot of gaps that still exist that we need answers to,” Ware added. “We shouldn’t be having these conversations 10 years from now, given that things are opening up, there is access, there are people will to take serious looks. . . . I think we really have to gear the science up to answering these questions.”