The work, unveiled in a series of papers published in Science, Science Advances, Cell, and other journals, details the third and final part of the Genotype-Tissue Expression (GTEx) project, which launched more than a decade ago to explore population-specific and sex-specific differences in gene expression to glean insight into how those differences may play a role in aging and disease.

During the course of the project, the researchers collected samples of multiple tissue types from more than 900 deceased human donors. The team then sequenced the donors’ genomes and measured gene activity by quantifying RNA levels in the tissues. Having multiple tissues from the same person, as well as a variety of donors, the GTEx team could use statistical analyses to link DNA variants to gene expression differences and map gene regulation in up to 54 different types of tissues. The work created an invaluable resource for analyzing gene expression in particular diseases, tissues, or cell types, Jan Korbel, a human geneticist at the European Molecular Biology Laboratory (EMBL) in Heidelberg, Germany, tells Science.

From the data, the GTEx team could identify the relationship between specific genes and a type of regulatory DNA called expression quantitative trait loci, or eQTL. At least one eQTL regulates almost every human gene, and each eQTL can regulate more than one gene, influencing expression, GTEx member and human geneticist Kristin Ardlie of the Broad Institute tells Science. 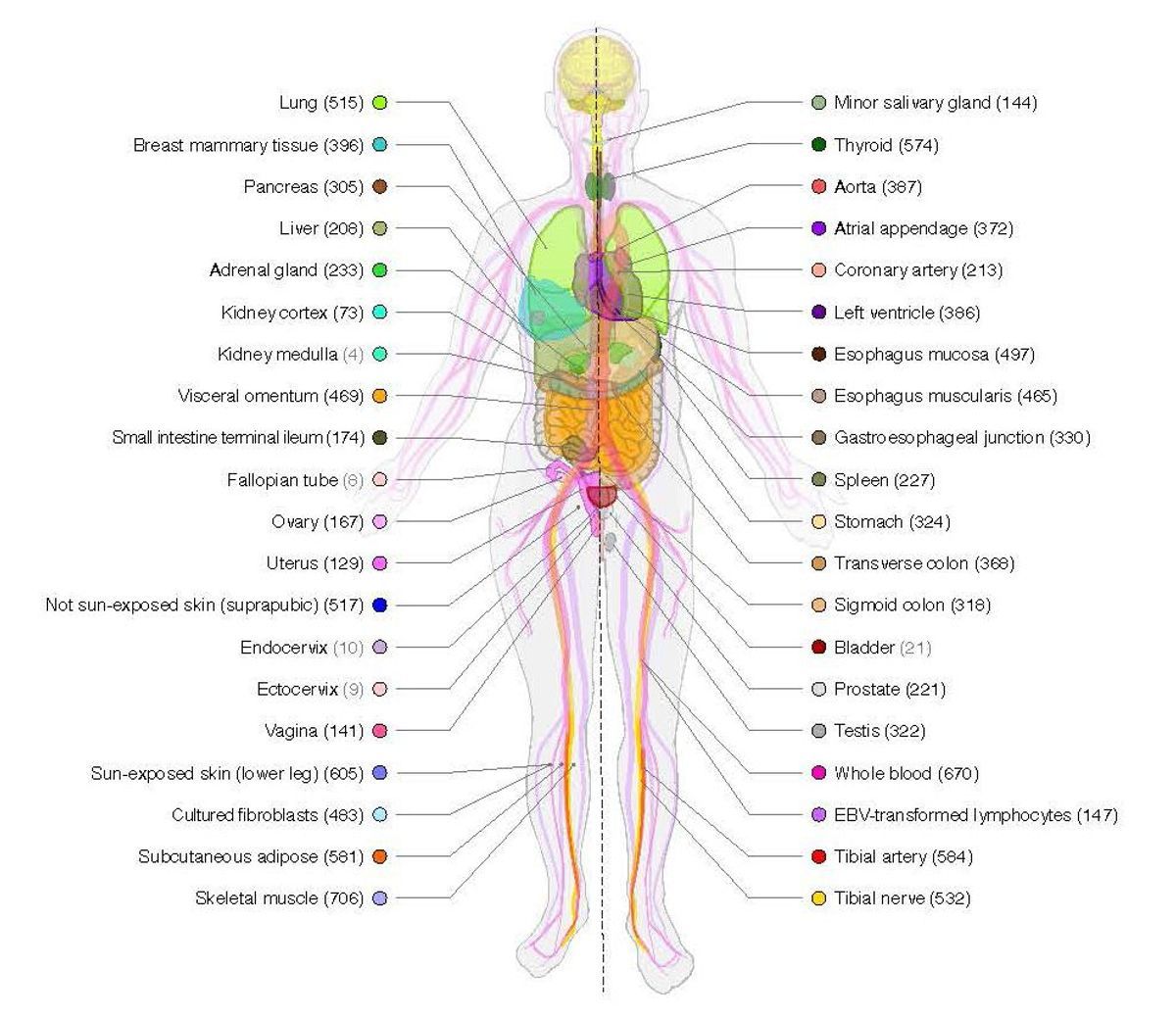 In the project, 54 tissue types were examined, including 11 distinct brain regions. In the illustration, the sample numbers from genotyped donors are in parentheses.
Aguet et al., Science 2020

Another major takeaway from the analyses was that sex affected gene expression in almost all of the tissue types, from heart to lung to brain cells. “The vast majority of biology is shared by males and females,” yet the gene expression differences are vast and might explain differences in disease progression, GTEx study coauthor Barbara Stranger of Northwestern University’s Feinberg School of Medicine tells Science. “In the future, this knowledge may contribute to personalized medicine, where we consider biological sex as one of the relevant components of an individual’s characteristics,” she says in a statement issued by the Centre for Genome Regulation in Barcelona, where some of the researchers who participated in the GTEx project work.

Another of the studies bolsters the association between telomere length, ancestry, and aging. Telomere length is typically measured in blood cells; GTEx researchers examined it in 23 different tissue types and found blood is indeed a good proxy for overall length in other tissues. The team also showed that, as previously reported, shorter telomeres were associated with aging and longer ones were found in people of African ancestry. But not all earlier results held; the authors didn’t see a pattern of longer telomeres in females or constantly shorter telomeres across the tissues of smokers as previous studies had.

Not everyone is singing the project’s praises. Dan Graur, an evolutionary biologist at the University of Houston who often criticizes big projects like GTEx, tells Science the results are hard to parse and there was little diversity, with 85 percent of the tissue donors being white. He also was critical of the use of deceased donor tissue, questioning if it truly reflects gene activity in living humans. “It’s like studying the mating behaviour of roadkill.”

Other scientists say there’s much work to be done. The gene regulation map leaves many unanswered questions about the exact sequences that cause disease and how gene regulation systems work in tandem. Genomicist Ewan Birney, the deputy director general of EMBL, tells Science, “We shouldn’t pack up our bags and say gene expression is solved.”