ABOVE: Water voles are among the terrestrial animals identified using eDNA collected from waterbodies. This one was live-trapped in Scotland.
REBECCA TANNER

Environmental DNA has become the ecologist’s shiny new tool, unraveling mysteries about endangered and elusive aquatic species in recent years. The novel biomonitoring method looks for traces of DNA shed by fish and other organisms in water bodies. Now, scientists are adapting the technique to search for the presence of land-dwelling creatures.

Scientists have recently sampled eDNA from streams and rivers in the UK and in the Amazon and the Atlantic Forest in Brazil to assess local mammal communities, and their results surprised them. Published in two separate studies, the team detected 20 wild mammal species, some of which are difficult-to-survey animals, including red deer, mountain hares, pine martens, red foxes, and badgers in the UK, according to findings published March 20 in The Journal of Applied Ecology. The group also found evidence of endangered animals such as water voles. In another study, published in Mammal Review in January, the team identified 17 species, including monkeys and  bats from sampling eDNA in nearby waterbodies in South America.

The research adds to recent work by scientists who are pushing the technique beyond assessing water-dwelling creatures to identify mammals, insects, and birds that live on land. Many research groups have been looking to reinforce the methodology of analyzing and sampling eDNA so that organisms that do not frequent the water often can be detected with low concentrations of DNA.

We were able to detect a lot of exciting species like river dolphins, anteaters, and tapirs.

At the end of last year, a group in Australia was able to detect the endangered Gouldian finch (Erythrura gouldiae) from eDNA traces in waterholes. Other teams were able to extract eDNA from snow tracks to identify various species. In Japan, scientists were able to identify several carnivores including Japanese marten (Martes melampus), red fox (Vulpes vulpes) and wolf (Canis lupus familiaris). In another study in Montana, researchers found evidence of the snow lynx among other animals from collecting eDNA from snow tracks. And in Denmark, researchers used eDNA left behind on flowers to identify terrestrial arthropods that had visited the plants—these included ladybirds, spiders, butterflies, and beetles.

In 2017, Allan McDevitt, a molecular ecologist at the University of Salford in the UK, and his team expanded their project from using eDNA to survey aquatic animals to new territory, surveying land mammals. “When we started working on this project, I was like, ‘this is ridiculous, there’s no way this is going to work.’ Thankfully, I had a few optimistic PhD students with me at the time,” says McDevitt who led the two latest surveys.

Previously, his group had been applying the use of eDNA to monitor fish and amphibians in aquatic environments. Terrestrial animals often pass through rivers and streams, taking a drink or urinating and defecating in them, explains McDevitt, potentially shedding DNA there. And within the watershed, DNA and organic material will leach into the nearest stream or river after rainfall. So, the scientists wondered if they could use similar methods to detect mammals in the land around rivers or streams.

See “No Place to Hide”

In one study, the researchers took water samples from rivers and streams in in Assynt, Scotland, and Peak District, England. They filtered the samples and extracted DNA from the organic material left on the filter. DNA in water tends to bind to sediment, and over time as these residual particles get bigger, there is an accumulation of older DNA on these larger particles. Depending on the conditions, it is possible to collect eDNA from thousands of years ago locked in these large deposits. To ensure the capture of contemporary DNA, the researchers filtered their samples to collect smaller sediment particles.

After filtering, the scientists used polymerase chain reaction with mammal-specific primers to amplify sections of mitochondrial DNA. They then used DNA barcodes to identified taxa.

McDevitt says the team was amazed that with just three to five scoops of water, a total of one-half to two liters, and a good sampling technique they were able to pick up carnivores that would only have had occasional visits to the water, such as red foxes, badgers, and weasels. 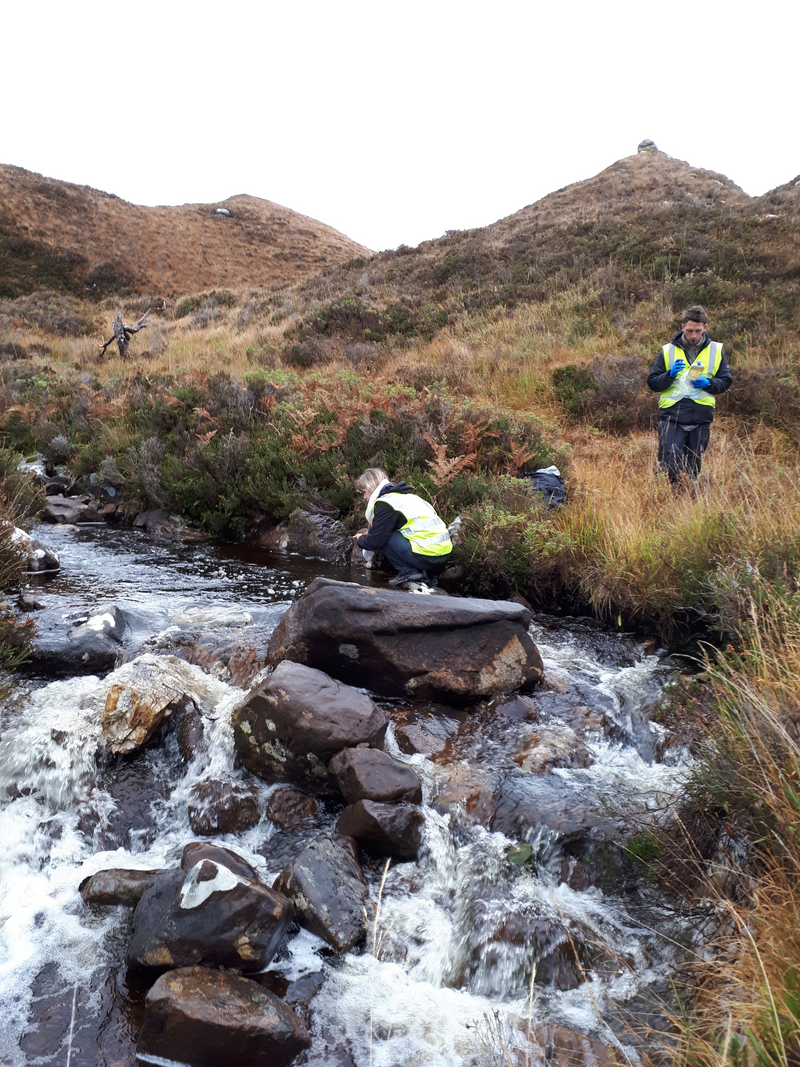 Naiara Sales, a molecular ecologist at the University of Salford, and Sam Browett, a Salford PhD student, sample water in Scotland.
Allan McDevitt

One of the aims of the study was to compare the efficiency of eDNA in detecting semi-aquatic or terrestrial mammals with traditional ecological techniques such as historical records, cameras, animal tracks, and fecal samples. The eDNA results aligned with where they expected to see certain animals, which was also confirmed with traditional methods.

But in other cases, they got some surprises. In one instance, they picked up water vole DNA in an area where the species had not been documented before. Later, when they planted camera traps in the location, McDevitt’s team spotted the animals, which confirms that the eDNA data were correct.

“This study definitely takes the discipline to the next step. The field has largely been involved in surveying aquatic species,” says Rafael Valentin, an ecologist at Princeton University.

“eDNA-based surveys are not yet a stand-alone tool to monitor distributions of terrestrial animals with confidence but require some validation by other methods, such as camera trapping,” Peter Seeber, an environmental geneticist at the University of Konstanz in Germany who was not involved in the study, writes in an email to The Scientist. “Thus, studies such as these, ie, validating eDNA results by comparison with more conventional methods are crucial for assessing reliability of detection rates.”

eDNA faces challenges in the Amazon 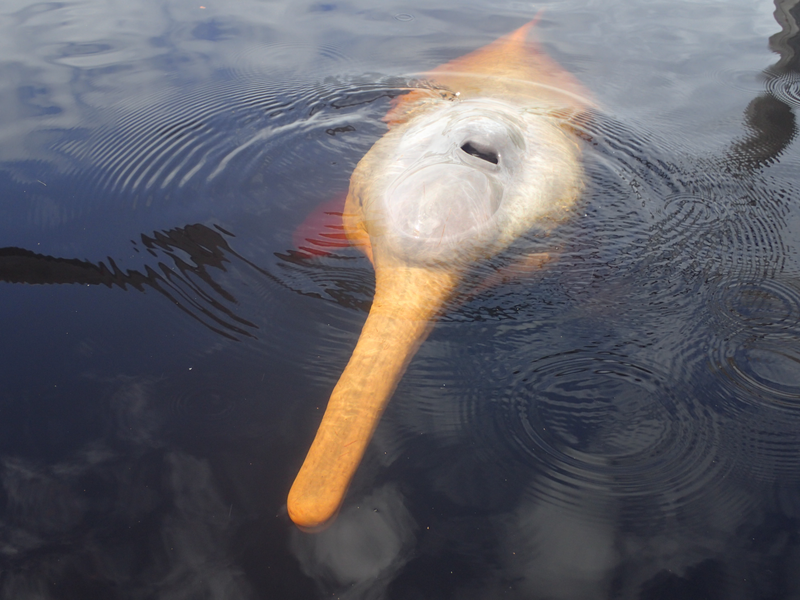 The river dolphin was among the animals identified by eDNA in water in the Amazon.
Chiara Benvenuto

After their initial studies in the UK, the group decided to try its methodology in the largest tropical rainforest in the world, the Amazon, comprising at least 10 percent of Earth’s biodiversity, and in another site called the Atlantic Forest in Brazil.

“We were able to detect a lot of exciting species like river dolphins, anteaters, and tapirs,” says McDevitt. However, he adds that they did not detect as many species in the Amazon as they thought they would. It could be because the water samples had a low pH, which could degrade the DNA faster than in other environments. Typically, DNA hung around for 48 to 72 hours in their studies in the UK, where the water had a more neutral pH, but McDevitt says this might be shorter in the Amazon’s waterways.

“We don’t know enough about eDNA taphonomy, ie, the fate of DNA once shed into the environment,” says Seeber. “This is particularly complicated, seeing as how many factors affect degradation and preservation. Exposure to UV radiation, oxidation, deamination and enzymatic degradation need to be considered when targeting not only DNA that was shed into the environment very recently but also DNA that has been around for some time.”

McDevitt and colleagues came across another challenge in South America. “We would detect a DNA sequence, we would know it was a mammal, and could in some cases work out the genus, but we would not be able to determine the species. And this is because in areas like the Amazon we don’t have a good enough reference DNA database.”

McDevitt says that in England and Scotland this wasn’t really a problem, as mammalian species are well characterized there. He says the next stage of the field should be to start building up the reference library of these cryptic animals in biodiverse areas. McDevitt is going back to the Amazon with his team to do more research on a much larger scale, which will include creating new reference databases. 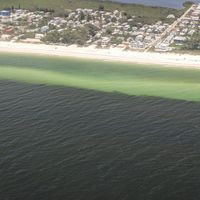