ABOVE: Newly identified oligodendrocyte progenitor cells (green) in a mouse brain arise from adult stem cells (blue). Here, one sits on the surface of the ventricle wall, nestled among cilia (red).
ANA DELGADO AND FIONA DOETSCH, BIOZENTRUM, UNIVERSITY OF BASEL

Scientists have discovered two types of glial cells in the brains of adult mice—an astrocyte and an oligodendrocyte progenitor cell—after nudging neural stem cells to rise from dormancy, according to a study published June 10 in Science. The results suggest new roles for glial cells, best known for providing support to neurons, and could prompt a better understanding of how brains remain plastic into adulthood, when the vast majority of neurons no longer undergo cell division.

This study is “a very important addition to the whole story about these fascinating [stem] cells that exist in the adult brain of rodents that have the capacity to generate new cells,” says Arturo Alvarez-Buylla, a developmental neuroscientist at the University of California, San Francisco, who was not involved in the work. “Understanding adult stem cells is fundamental to really know the kinds of plasticity that exist after the developmental period is over.”

Most mammalian brain cells, be they neurons or glia, are generated during embryonic development, and reservoirs of stem cells become largely, if not entirely, dormant in adulthood. The small trickle of activity that is left can help the brain respond to change, sometimes by generating new neurons to help with learning or by producing cells in response to injury or disease.

One pool exists in the brains of adult humans and mice, in an area called the ventricular-subventricular zone (V-SVZ). The walls of the two lateral ventricles, cavities filled with cerebrospinal fluid, are lined with stem cells, and along these walls, the cells have a regional identity—where a stem cell lies on the wall dictates what it differentiates into. This feature has been well-characterized for neuronal subtypes, which are synthesized within discrete domains on the lateral wall. Glial cells are known to be generated at low levels along the septal wall, but the specific subtypes remain unknown because the cells along this wall generally remain inactive.

Nobody expected them to be inside the ventricular system and attached to the wall of the ventricle, and so nobody had ever looked there before. But when you actually look, you can see them really beautifully.

Fiona Doetsch, a stem cell biologist and neuroscientist at the University of Basel in Switzerland who coauthored the study, has long been fascinated by adult stem cells and what factors regulate this dormancy, or quiescence. “People used to think of quiescent cells as the cells just hiding out and not being sensitive to any signals. But actually, the quiescent state is emerging as a very actively maintained state,” Doetsch tells The Scientist.

To determine what might be maintaining these stem cells in a quiescent state, Doetsch first compared the transcriptomes of purified dormant and activated stem cells from the V-SVZ of adult mice. Roughly 95 percent of the quiescent cells had high levels of a receptor called platelet-derived growth factor beta (PDGFRβ), compared to only 50 percent of the activated stem cells. This clue led Doetsch to suspect that perturbing the PDGFRβ signal might release stem cells from dormancy.

They developed a mouse model with an altered PDGFRβ that was unable to be bound by ligands and tagged adult V-SVZ stem cells with a fluorescent protein to track any new cells generated by the stem cells.

As expected, the silencing of PDGFRβ led to an increase in active and dividing stem cells in both sections of the V-SVZ compared with control mice, and this revival resulted in more mature neurons being detected in the olfactory bulb, as well as more oligodendrocytes, a type of glial cell, in the adjacent corpus callosum. The olfactory neurons were traced back to the lateral wall, while the oligodendrocytes stemmed from the septal wall. Fluorescing cells were detected outside of the ventricles for more than 180 days, an indication that the new cells were persisting and integrating into the brain.

The experiment led Doetsch’s team to identify two types of glial cells that scientists hadn’t documented before. One domain on the septal wall produced a type of astrocyte—indicated by molecular markers characteristic of this cell type—that the researchers called gorditas due to their squat and round cell bodies that are smaller than known astrocytes, which have a bushy appearance. 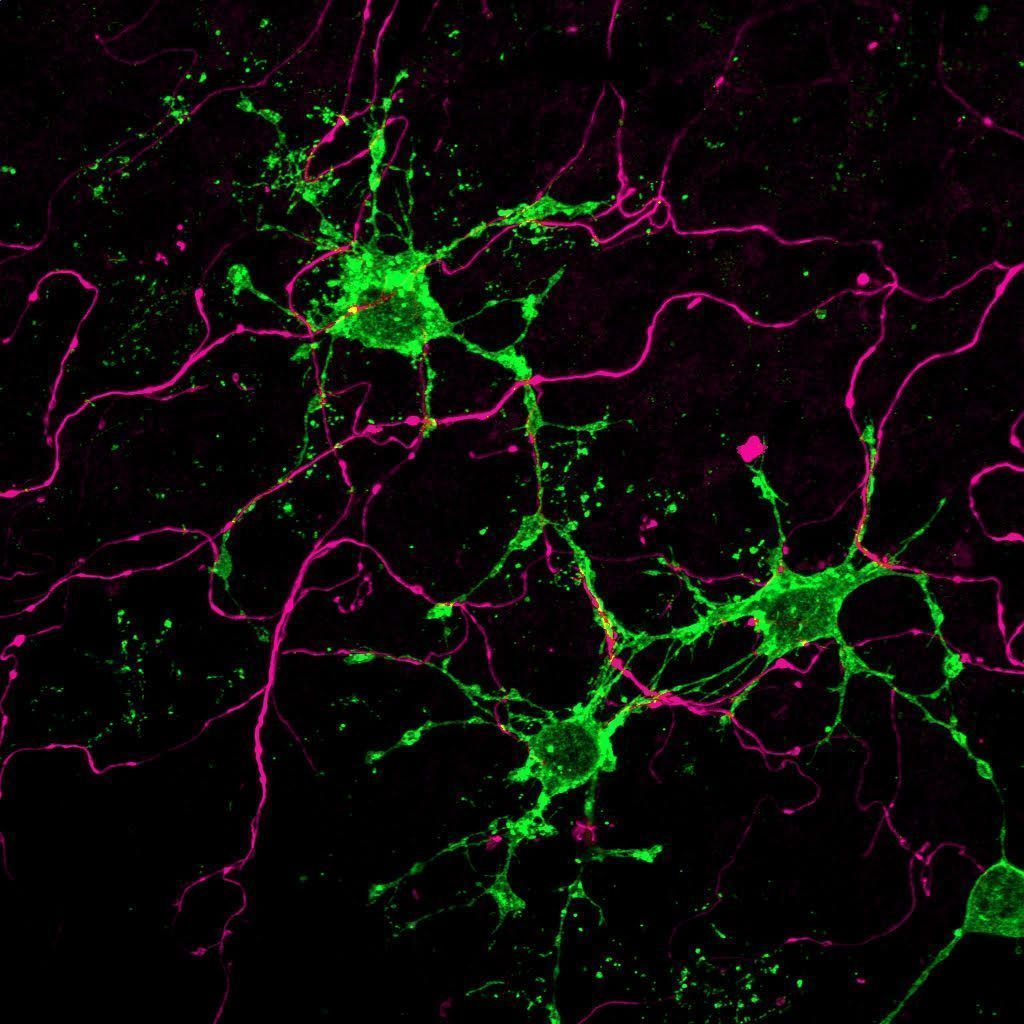 Doetsch and her team noticed several unusual qualities about the OPCs beyond their choice of real estate. The cells were continuously bathed in cerebrospinal fluid passing between the two lateral ventricles, and while the progenitor cells did not have the characteristic myelin sheath that mature oligodendrocytes use to insulate the axons of neurons, these intermediary cells were still intertwined with the axons of neurons extending from brain regions far away from the V-SVZ.

None of these progenitor cells differentiated into mature oligodendrocytes during the experiment—another rarity, says Sarah Moyon, a neuroscientist at the City University of New York who studies oligodendrocytes and was not involved in this research. “Their position, where they are, and the fact that . . . we don’t see them stain” for classic markers of mature oligodendrocytes all suggest that these cells have a reason for remaining as progenitors, with their own unique and as-yet unknown function, she adds.

Given their contact with both the cerebrospinal fluid and long-range axons, both Moyon and Doetsch tell The Scientist that they suspect the OPCs play some role in neural communication. “They’re really uniquely poised to sense and integrate signals from different brain regions,” Doetsch says. “We’re very interested now in defining the receptors that they express and what kind of information is being exchanged between cells.”

Because most V-SVZ stem cells are dormant under normal conditions, the team carried out one last experiment to see whether injury might prompt the cells to activate naturally. They injected a compound called lysolecithin that degrades myelin in the corpus callosum of wildtype mice. In response, stem cells along the septal wall began producing more OPCs and gordita astrocytes, although the researchers did not track whether the cells migrated to the corpus callosum, a step for future work.

While this study was done in mice, humans have analogous brain regions. “Now that we understand this modulator of [stem cell] quiescence in mice, maybe one could test whether it’s similarly present in humans. And whether these oligodendrocyte progenitors are present there, we don’t know yet,” Doetsch tells The Scientist. “We know so little about them, and there’s still a lot to discover.”