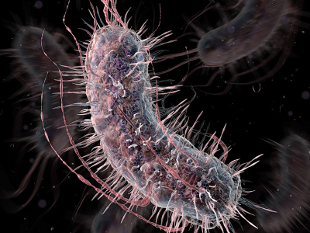 SCIENCE, CHRIS BICKELThe genetic code normally contains 64 codons, but researchers from Harvard University and their colleagues have designed an Escherichia coli genome with only 57 codons, replacing the others wholesale. In a paper published today (August 18) in Science, the team describes the computer-generated genome and reports on the first phases of its synthesis in the lab.

“We create something that really pushes the limit of genomes,” study coauthor Nili Ostrov, a postdoc in George Church’s lab at Harvard, told The Scientist. “The idea is that this is completely new, and we’re trying to see if it’s viable.”

In the planned 57-codon E. coli genome, each of the seven deleted codons is exchanged for a synonymous one. The team has a number of goals for the project. Once the E. coli genome is pared down to 57 codons, the seven blank codons can be reintegrated...

A recoded genome also imparts resistance to viral infection and can be used for biocontainment: the DNA incorporated from wild-type E. coli or viruses can’t be used to build proteins successfully when transfer RNAs (tRNAs) insert a nonstandard amino acid in response to a given codon. One or more of the free codons could also be recoded to an amino acid only available in the lab, making the engineered E. coli metabolically dependent on scientist-supplied media.

“We put great care and thought into how to develop methods,” said Ostrov, noting the safety and biocontainment concerns of the project. “What we’re trying to do is chart uncharted waters.”

To design the genome, the research team created a software tool that replaced every instance of the seven codons with a synonymous codon in a stretch of DNA that could be synthesized in a lab. In total, the recoded genome design had 62,214 codon replacements across 3,548 genes. “It’s arguably the largest and most radical genome engineering project,” Church told The Scientist.

With the theoretical genome in hand, Ostrov and colleagues began testing their design in living cells. They divided the recoded genome into 87 segments, each about 50 kb long—containing an average of 40 genes—and handed the design off to biotech companies to synthesize the DNA. The researchers then began integrating each segment into a separate strain of E. coli and deleting the corresponding wild-type DNA to check for viability.

“In principle you could do this whole-genome synthesis in vitro and then transplant the genome,” said Church. Instead, his team developed a pipeline to obtain real-time feedback from living cells: “Assembly occurs with the motor running,” he explained.

In their paper, the researchers review the results of this validation for 55 of the 87 genome segments, covering 63 percent of the recoded genome.The initial computational design for the recoded genome wasn’t quite perfect: 13 essential genes had fatal errors that killed the E. coli when the wild-type DNA segment was deleted.

“We anticipated that there would be so-called synonymous or silent positions that aren’t really synonymous or silent, where we’d overlap with regulatory elements or secondary structures,” said Church. To resolve these errors, the researchers pinpointed each individual problematic codon and tested replacement—but still synonymous—sequences.

“It is a bit surprising to see how plastic the genome could be,” Patrick Cai, a synthetic biologist at the University of Edinburgh who was not involved with the work, wrote in an email to The Scientist. “It is also very exciting to see [that] technologies such as computational design, de novo synthesis and assembly, as well as a range of phenotyping assays, are now mature to support genome refactoring at this scale.”

The team must still finish validating the rest of the synthesized DNA segments and then combine them in vivo. “This is, of course, an exciting paper with clear advances,” said Patrick O’Donoghue, a biochemist at Western University in Canada who was not involved with the work. O’Donoghue pointed out two key issues that represent future hurdles for the field: first, preventing the replacement codons from mutating back to the original genome state; second, if the codons are someday reintroduced with matching tRNAs to insert noncanonical amino acids, preventing the normal near-cognate tRNAs from translating them as well. “The strain that they’re working towards will be useful, but there will clearly be some technological challenges,” he added.

“The next paper, which hopefully will be soon, will be to polish off the genome and start testing for things like multivirus resistance, seeing how many amino acids we can load up, and confirming the biocontainment,” said Church.