Earlier this year, as transmission of SARS-CoV-2, the virus behind the COVID-19 pandemic, started to pick up speed, researchers around the world hurried to find model systems that could provide insight into disease spread, host immune responses, and possible treatments.

“When the pandemic first started, nobody really knew what was going to be the best model,” says Amanda Martinot, a veterinary pathologist at Tufts Cummings School of Veterinary Medicine.

The most widely available candidates were mice, which are easily housed and so well-researched that there are tons of tools available for studying nearly every aspect of their biology. But as researchers suspected, based on previous incompatibility of mice and other coronaviruses, the animals present challenges when it comes to studying SARS-CoV-2. The virus uses a human receptor called ACE2 to get into cells, but mouse ACE2 is different enough that the virus doesn’t readily bind it.

Even with the success of those approaches, investigators have also been on the lookout for other options. Ferrets, for instance, are useful for studying viral transmission and viral replication in the upper respiratory tract and have been used by several groups for SARS-CoV-2 experiments. Some researchers have also turned to hamsters, which have been used in the past to study other viruses, including the coronaviruses responsible for severe acute respiratory syndrome and Middle East respiratory syndrome.

“Hamsters are known in virology for their permissiveness to all kinds of viral infection really, and, as a rule of thumb, I would say if something doesn’t work in a mouse, you may as well try a hamster,” says Jakob Trimpert, a postdoc at the Free University of Berlin. “And if you’re lucky, it works there.” Along with collaborators, he’s been using several species of hamsters to study SARS-CoV-2 infections and potential therapeutics.

The hamster ACE2 receptor is compatible with SARS-CoV-2, and the animals develop clear clinical indicators of disease, he explains. For instance, Syrian hamsters (Mesocricetus auratus), one of the hamster species most commonly used in virus research worldwide, get mild SARS-CoV-2 infections, but their main symptom—weight loss—is reproducible and possible to measure. These animals also have severe pneumonia that is detectable via lung pathology. Trimpert and his colleagues used both transcriptomics and proteomics to evaluate the animals’ immune responses to SARS-CoV-2 in a study they published on July 20.

Many alveolar air spaces (white) are collapsed during a SARS-CoV-2 lung infection in a Syrian hamster (right). They are not collapsed in an uninfected hamster’s lung (left).
Amanda martinot, tufts cummings school of veterinary medicine

“Hamsters have been the best model so far for showing us any clinical disease,” says Martinot. “They develop weight loss, and they develop a fulminant pneumonia where it’s affecting sometimes over fifty percent of their lung,” she adds. “They also will recover if given time, but the pathology we feel is more representative of what you might see in humans.” Martinot, Dan Barouch, who directs the Center for Virology and Vaccine Research at Beth Israel Deaconess Medical Center, and other collaborators recently published a study showing that a SARS-CoV-2 vaccine protected against weight loss and pneumonia in Syrian hamsters.

This species, also known as the golden Syrian hamster, has some drawbacks, too, Trimpert says. They’re big, for one, weighing in at 150–160 grams fully grown, in contrast to adult mice, which tip the scales at about 30–35 grams. Syrian hamsters are also aggressive toward each other and sometimes the people taking care of them. Their size and aggression mean that they often have to be housed alone in larger cages, which makes them more expensive to keep.

The biggest issues, according to Trimpert, are the poor quality of the sequenced genome—many genes are just missing—and the lack of molecular tools that work in hamsters. To circumvent these problems, Trimpert and his colleagues are resequencing and annotating the Syrian hamster genome.

Because the weight loss in Syrian hamsters—their only easily observable clinical symptom—is quite mild, it’s also a drawback, particularly when testing therapies or vaccines, Trimpert tells The Scientist. “If you need thirty hamsters in order to get statistical significance . . . that is a huge practical problem.”

The researchers are skirting this issue by beginning work with another species, Roborovski dwarf hamsters (Phodopus roborovskii), which are smaller than mice and less aggressive than Syrian hamsters. The dwarf hamsters also get much sicker than their larger relatives following SARS-CoV-2 infection, developing massive blood clots in the lungs, which are often present in severe cases of COVID-19 in people as well. Most of these hamsters eventually die of the complications of the infection, which, according to Trimpert, indicates that they might be a good model of severe disease in humans.

Organoids in addition to animal models 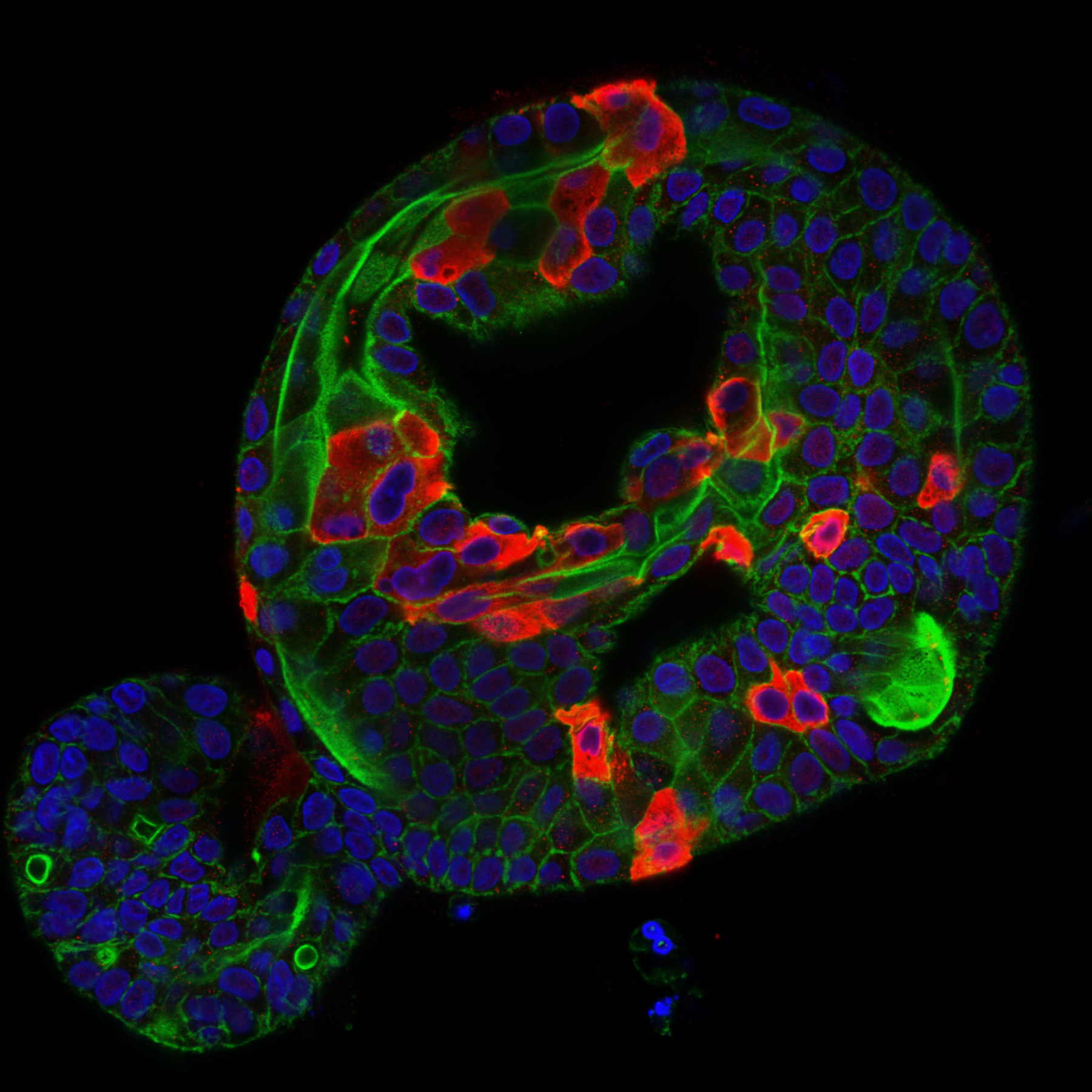 Getting a better picture of what is happening in people is a common goal. Eric Song, an MD/PhD student in Akiko Iwasaki’s lab at Yale School of Medicine, wanted to determine what effect SARS-CoV-2 was having on the brain. He and his colleagues used a humanized mouse model, in which a promoter drives the expression of human ACE2 in epithelial cells, in a study released as a preprint earlier this year. They found that SARS-CoV-2 could infect the central nervous system in the mice, but it still wasn’t clear whether those findings translated to human patients.

To probe that question, the researchers turned to brain organoids—cultured, miniature organs that resemble the developing brain and contain neuronal and glial cell types derived from human induced pluripotent stem cells (iPSCs). Not only did SARS-CoV-2 infect the organoids, infection also appeared to cause cell death, a finding corroborated by another study in brain organoids published by separate group September 23. Song and his colleagues also found antibodies against SARS-CoV-2 in the cerebrospinal fluid of people with COVID-19 and evidence of SARS-CoV-2 infection in the post-mortem brains of COVID-19 patients.

The team used three complementary methods to account for the limitations of each, Song tells The Scientist. “There is room for all the different models that are in play,” he adds. With human samples, “you can only take really a snapshot of the sickest patients because that’s the only time you will be getting a post-mortem sample, but combined with the mouse and the organoid model, you’re able to study [the] kinetics and the dynamic process of viral invasion. Things like organoids really help us access tissues that we would not otherwise have access to.”

Immunologist and developmental biologist Hans Clevers of Utrecht University in the Netherlands and colleagues are leveraging that access with gut organoids. Rather than deriving the organoids from iPSCs, though, they use multipotent stem cells taken from any adult epithelial tissue. In some ways the strategy is more limited: gut epithelial cells can only make mini guts, for instance, in contrast to iPSC-derived organoids, which can become lots of different tissues. On the other hand, “they grow forever,” Clevers says. “iPSC-based organoids, you make them and then you have to use them for an experiment because they stop growing the moment you start specifying them.”

His group published a study on July 3 investigating whether or not SARS-CoV-2 can target the gut, a hypothesis based on the expression of ACE2 in the intestinal lining and the gastrointestinal symptoms that many COVID-19 patients experience. Their work in human small intestinal organoids confirmed that the virus does enter the cells of the intestinal lining, replicate, and cause changes in gene expression.

Now, Clevers and his colleagues are using organoids to test possible COVID-19 therapeutics. Chloroquine is an example of a drug that looked promising for blocking SARS-CoV-2 infection when researchers tried it in conventional cell culture—in that case, cells derived from African green monkey kidneys and grown in one layer on a dish, he says. But, as they’ve shown in a new study that’s been submitted for peer review, in the gut organoid model chloroquine is ineffective against SARS-CoV-2, just as it is in patients. According to Clevers, this latest finding indicates that an extra screening step in organoids following the identification of a promising drug in a traditional cell culture system could provide another layer of information before moving into preclinical animal models or the clinic.

Cell lines are cheap, they grow fast, and most robotic strategies for screening have been designed for cells growing in two dimensions, Clevers says. “There are multiple efforts now around the world to come up with the machines to do similar high throughput screens with 3D. With the organoids, it’s a little bit more complex to analyze because they’re not flat,” he explains, but the type of organoids they generate in his lab grow quickly. He predicts that organoids will come to be used more widely because their physiology recapitulates that of humans so well, but that they’ll never replace animals.

Along with hamsters, nonhuman primates are one of the main models that researchers studying COVID-19 therapeutics use. SARS-CoV-2 readily infects primates, such as macaques, due to the compatibility of their ACE2 receptor, but they do not show disease symptoms, says Martinot. The nonhuman primate experience of COVID-19 seems to be most similar to the mildly symptomatic cases of most people who are infected, she adds. They develop regions of pathology in their lungs that are detectable with a microscope, but it’s not enough to make them sick, and observing that kind of disease in a person is unlikely because these animals are euthanized early in infection to allow researchers to track any changes.

“It would be nice to have a primate model of severe disease,” says Barouch. “Nobody has been able to develop one so far, but models are always in development.”

And symptom presentation isn’t everything. These animals are harder to access and harder to house than rodents, but “they are a wonderful model for vaccine research and for evaluating . . . the adaptive immune response to COVID-19,” Martinot says, at least in part because there are so many existing tools researchers can leverage. “Reagents that are available for evaluating the immune response [in people] work in monkeys, and so we can very carefully monitor the nonhuman primate for the development of antibodies,” cytokine responses, and T-cell responses, she adds.

“You always want to pick your best model for your specific question,” Martinot tells The Scientist. “But depending on what kind of question you’re asking, or what kind of drug you’re testing, you really have to choose the model that best fits your ability to answer those questions in a very accurate and reproducible way.”

The World Health Organization’s Research & Development Blueprint Team has been working on this since February. The team reviews progress and coordinates efforts on animal models of COVID-19 with the primary goal of advancing the development of COVID-19 therapeutics and vaccines. On September 23, some group members and a handful of other researchers published a review detailing the work that’s been done to model SARS-CoV-2 infections in animals—particularly, mice, hamsters, ferrets, and nonhuman primates—and highlighting how findings in animals correspond to disease progression in people.

“The development and use of these models is not a linear process, and they’re under constant revision,” says Barouch, who is part of the WHO working group. “When there is human data, then that allows back validation or refinement of the model . . . so there has to be a continuous feedback from models to clinical trials and back.”

“In things that are so new, like SARS-CoV-2, it may well be that there is more than one useful animal model,” Trimpert says. “We should be open and flexible, especially in emergency situations like this.”