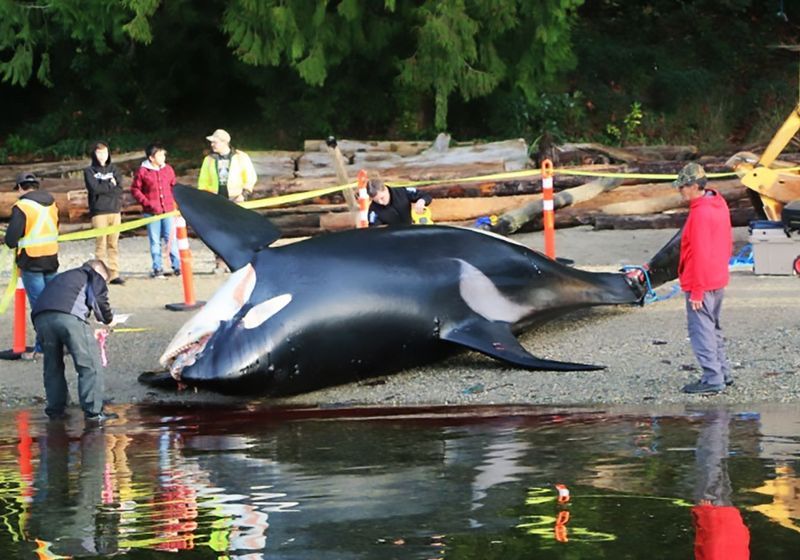 Postmortem examination of J34, an 18-year-old male southern resident killer whale that stranded near Sechelt, British Columbia, on December 21, 2016, shows he died from trauma from a collision with a ship. Data in this study and a past one indicate that vessel strikes are an underappreciated killer of killer whales in the eastern Pacific ocean.
PAUL COTTRELL / FISHERIES AND OCEANS CANADA

While the stench of a dead, bloated killer whale that’s washed ashore might steer away your average beachgoer, for Stephen Raverty of the Ministry of Agriculture in Canada it’s an invitation to collect data. Raverty, a veterinary pathologist, carefully examines each one he’s called to dissect, knowing that they retain invaluable information about the overall health of orcas in the Pacific ocean. Raverty says the data on killer whale deaths give clues to what factors might be keeping the Pacific populations on the endangered and threatened species lists.

For decades, researchers have been performing necropsies on beached orcas, but, until now, no one has amassed all of those data to assess the health of the populations and whether human activities, such as fishing or shipping, may harm the animals. In a study published this month in PLOS ONE, Raverty, veterinarian Joseph Gaydos of the University of California, Davis, and colleagues reviewed the pathology reports of 53 orcas that stranded between 2004 and 2013, as well as other data on 35 orca strandings between 2001 and 2017. The orcas ranged in age from infants to older adults, and in every age category, there was evidence of orcas dying after being struck by ships or entangled in or impaled by fishing gear. Infectious disease and congenital defects also caused deaths, but the data are clear: “Humans are killing orcas directly,” Gaydos says. 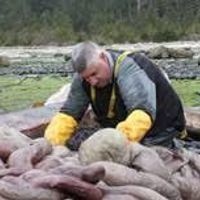 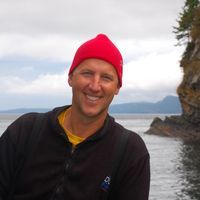 The Scientist spoke with Raverty and Gaydos about the findings.

The Scientist: In your paper, you note that necropsy findings have never before been evaluated to understand causes and trends in orca mortality. Why do this now?

Joseph Gaydos: We’ve seen how valuable this type of data analysis is for understanding shifts in populations of marine mammals such as gray whales. We had the data for orcas so we decided to use it to develop a baseline for understanding the health of the northern resident killer whale population off the west coast of Canada, which is threatened, and the southern resident population off the coast of the US and Canada, which is endangered, and what’s leading to the deaths of the stranded animals.

TS: How can the data help identify human causes of death and how to mitigate them?

Stephen Raverty: Necropsies on killer whales provide information on how each animal died, and collectively what are the leading causes of death. Blunt force trauma from ship strikes, for example, is quite obvious based on the bruises on an animal. There have been anecdotal stories of orcas being struck or even pulled into the propeller of boats, but before this study, there wasn’t a pattern of evidence that ship strikes, or other human activities, repeatedly caused death. Since there’s blunt force trauma or death by fishing gear, a hook in an orca’s throat, for example, documented in the necropsies across the age classes of orcas and across time, it’s clear humans are contributing to the death of the animals. We might be able then to use that information to influence human activity and reduce killer whale deaths from these kinds of direct interactions.

TS: What was most surprising to see in the necropsy data?

JG: That humans are directly killing killer whales. I think most people thought that humans’ influence on the animals might be indirect—disturbances from ships, things such as sonar, or overfishing of salmon, affecting the orcas’ diet. But we have to realize that adding back salmon, for example, is only part of the solution. A successful conservation strategy has to include steps to address these direct causes of death, as well as the indirect ones. 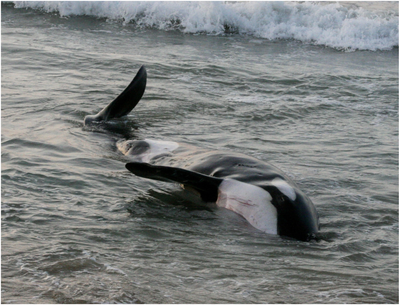 TS: How can you use this data going forward?

SR: Necropsy data are important to understanding the health and causes of death of the stranded animals. As part of the research, we developed a body condition index, which assesses the health of the animal when it died. It goes beyond measuring only the thickness of the animal’s blubber, which scales with the length from nose to the tip of the tail of the animal. The body score index takes into account the girth of the animal relative to its length, in addition to blubber thickness. That approach provides a more objective way to examine the nutritional health of the animal and is a technique that could be adopted around the world when studying stranded orcas and determining what killed them.

JG: To add to that, the study shows that performing these postmortem examinations is worth the effort. It shows that continuing to perform necropsies on killer whales helps us better monitor their health and understand what we can do to protect them.