As the afternoon breezes blow harder in the Atacama Desert—a place so desolate it’s used as a model of Mars—more microbes move into its driest regions.

Every morning for a week last year, astrobiologist Armando Azua-Bustos drove into the Atacama Desert and set up long lines of petri dishes. A researcher from the Center of Astrobiology in Madrid, Azua-Bustos wanted to see if he’d be able to catch any microbes with the dishes, and whether those microbes might start to grow.

He and his colleagues kept their expectations low. The Atacama Desert, which stretches about 1,000 kilometers along the coast of northern Chile, is the driest place on Earth—some spots haven’t seen rainfall in 400 years—and it’s blasted daily by ultraviolet radiation. Conditions are so harsh that the desert serves as a proxy for the surface of Mars, with scientists sending Red Planet rovers there for testing. For much of the 20th century, scientists wondered whether life could even survive there.

Knowing Atacama is a very windy place, we wanted to...

Knowing Atacama is a very windy place, we wanted to know whether wind could transport microbial life.

About 15 years ago, researchers discovered traces of bacterial RNA—though no DNA or cells—in the surface of what was then considered the driest part of the desert, a spot called Yungay. The following year, that team and others reported finding microbial DNA underground in the region, a clue that organisms might get by with just tiny amounts of water. A decade later, Azua-Bustos and colleagues confirmed those results, showing that microbes survive beneath the soil at María Elena South, a region now known to be even drier than Yungay.

One of the questions that arose from those studies, Azua-Bustos says, was “how do these species get there in the first place?” He says he was reminded of his childhood, growing up in a mining town just 15 minutes from María Elena South. The mornings, he remembered, were quiet, but later in the day, a dusty breeze developed from winds blowing in off the Pacific Ocean and grew stronger as afternoon turned to evening each day. “Knowing Atacama is a very windy place, we wanted to know whether wind could transport microbial life,” he tells The Scientist.

That led him and his colleagues to set up the lines of petri dishes at six spots in the desert: three east of the town of Tocopilla and three east of the port city Iquique, 228 kilometers to the north. The team filled the majority of the dishes with agar and one of four different growth media, and left the rest empty to measure the amount of dust blowing into each region. The agar-filled dishes were collected an hour after they were set out, aseptically sealed, and brought back to the lab, where they were left untouched for two weeks. Then, the researchers opened them up and cultured any bacteria inside, growing enough to analyze their DNA. 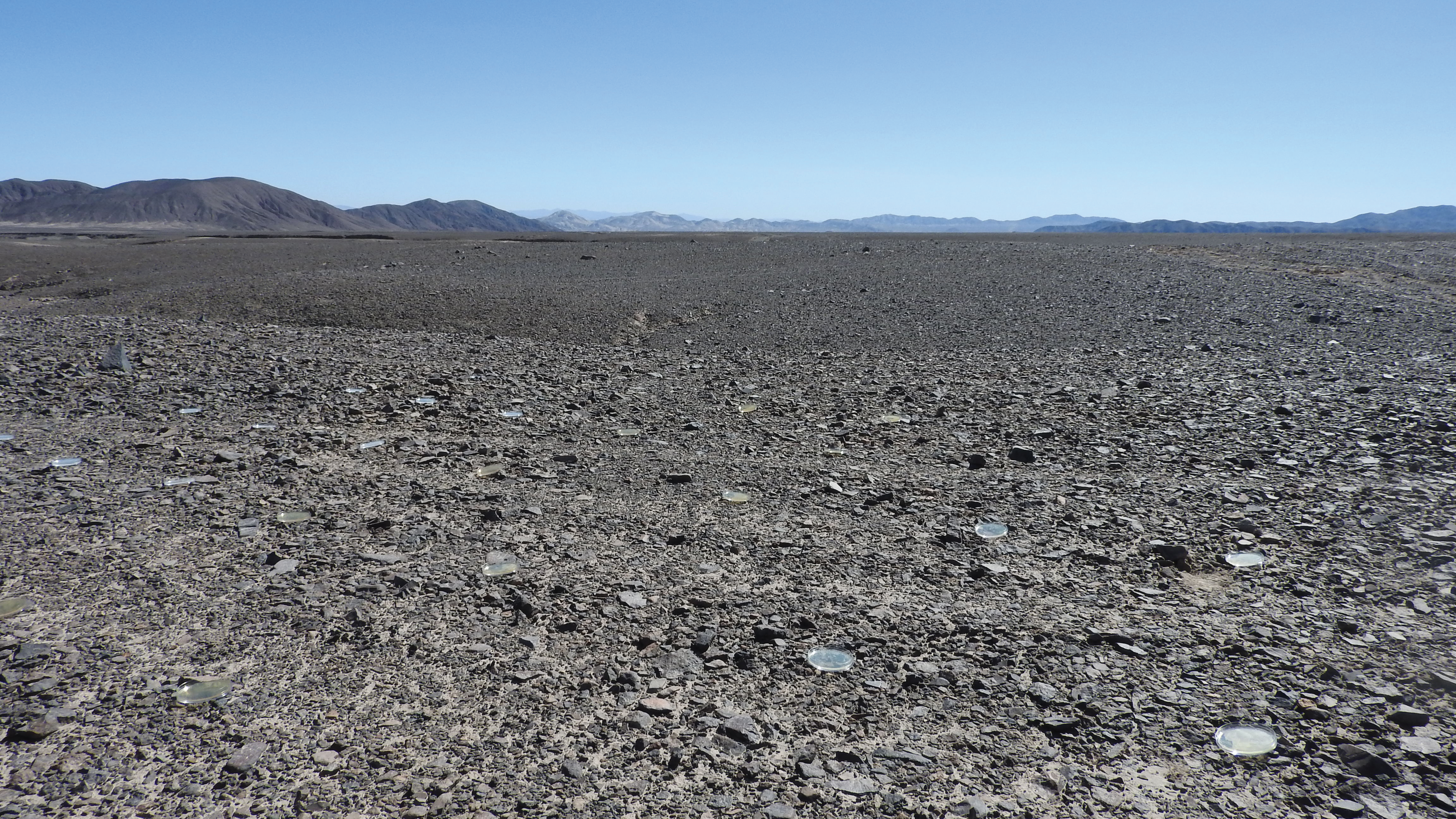 DESERT DISHES: Researchers set up lines of petri dishes in the Atacama Desert as part of a study on microbial transport.
Courtesy of Armando Azua-Bustos

Across the six sites, the team identified 28 microbial species: a mix of bacteria, bacterial spores, and fungi usually found in ocean and mountain sediments, some as far away as China and India. The greatest numbers of microbes were found on plates collected in the afternoons, suggesting that the tiny organisms were, as Azua-Bustos had suspected, riding in on airborne dust. Imagining the desert as a proxy for the Red Planet, the researchers argued in a recent paper that any microbial Martians of the past, or even of the present, might move around in the same way.

Kai Finster, a microbiologist at Aarhus University in Denmark who was not involved in the work, says it would not be surprising if microbes in the Atacama travel on dust particles in the wind. This type of travel, called aeolian transport, “takes place all over the world,” he says. “It’s not specific to the Atacama Desert.” Scientists are learning more about just how resilient microbes are to extreme environments, he adds, whether it’s extreme ultraviolet radiation, arid environments, or both. When microbes move in the wind, there’s “a lot of stress they have to deal with,” he says, but the reward is great: an entirely new environment with novel resources and potentially less competition.

It’s not yet clear whether species hitching a lift into the Atacama Desert from the ocean or the coast can colonize the soil; that’s a question the team is now trying to answer, Azua-Bustos says. The odds might not be so good, at least at the soil surface, notes Rafael Navarro-González, an astrobiologist at the National Autonomous University of Mexico who wasn’t involved in Azua-Bustos’s study. The problem is perchlorate, a naturally occurring chemical found in the top few millimeters of the soil at María Elena South—and on Mars—that is toxic to living creatures. Perchlorate and ultraviolet radiation combined can be particularly lethal for bacteria, a strike against finding life at the surface of the Red Planet.

There might be another problem, Finster notes: the viability of the wind-riding bacteria themselves. In lab experiments, he and his colleagues took spores of Bacillus subtilis, a species often found in soil, mixed them with minerals, and then shook them gently for days to simulate traveling in the wind. “We thought that [the bacteria] would survive for some weeks or so,” he says, but the researchers weren’t able to culture any of the bacteria after the experiment. They decided to cut the shaking time to a minute, and still, he says, the cells were killed. An examination of the shaken spores using an electron microscope revealed that they’d fallen apart.

Azua-Bustos, however, is undeterred, continuing his tests to see whether the species in the Atacama can endure the physical and chemical stresses. He’s even begun testing whether some species in the desert might not only be tolerant to ultraviolet radiation but use it as a source of energy. In parts of the Atacama, rocky surfaces are covered with a black biofilm, where microbial species appear to be absorbing all visible—and perhaps some invisible—wavelengths of the electromagnetic spectrum. It’d be exciting to find evidence that these microbes exploit ultraviolet rays or other types of light that can’t be seen by humans, Azua-Bustos says. But even just detecting microbes in the Atacama is “a fantastic sign that you can find life almost anywhere.”