SOFT AND SLEEK: Researchers have designed a marine robot that blends in with its environment (above) and moves by contracting artificial muscles to perform an undulating motion resembling that of an eel larva (below).
JACOBS SCHOOL OF ENGINEERING, UC SAN DIEGO

A flattened, almost completely transparent object moves slowly through the water. In its appearance, the colorless structure somewhat resembles an eel larva—and for good reason: this marine robot was designed with a leptocephalus, the name of a curious stage in the lifecycle of several eel species, in mind.

“We want to make a soft robot that can swim around coral reefs without damaging them,” says Caleb Christianson, a doctoral student at the University of California, San Diego (UCSD), who has been working on a prototype for more than a year and a half.

Marine robots have various uses. The oil and gas industries use unmanned vehicles for tasks such as installing under-water structures, constructing pipelines, and drilling. Scientists, meanwhile, are increasingly using the technology for environmental sensing, biological research, and finding ways to protect marine resources.

But most ocean-going robots come with a catch: they are noisy. The decibel levels and vibrations of the propellers and jets scare away fish and other animals. What’s more, most robots are built with metallic frames, which can bump into and damage fragile ocean life. Christianson decided to take a different approach, with a design incorporating “muscles that don’t have any rigid materials to them,” he says. “They’re just completely soft.”

In May 2016, Christianson and his colleagues at UCSD set out to build this soft robot. They weren’t the first to look to the natural world for this purpose—other research groups have used fish and manta rays as the basis for marine-robot design. But Christianson decided to focus on eel larvae, finding the wavelike motion of the fish to be an ideal model for the technology they were working on in the lab. What’s more, replicating the larva’s transparency would help the team’s creation blend into the ocean environment.

To create their eel-inspired robot, the researchers used transparent dielectric elastomer actuators (DEAs)—“pieces of rubber that respond to an electrical stimulation,” Christianson explains. While the rubber itself doesn’t conduct electricity, a voltage applied to the upper and lower surfaces of the elastomer causes it to flatten, making the material both thinner and longer.

To achieve movement, each individual DEA, or artificial muscle, required two electrodes: one, a small pouch of water inside the rubber, and the other, the water surrounding the robot in a tank in the lab.

Initially, the researchers started with two actuators, which, placed back-to-back, had the ability to bend to the right or to the left. To achieve more-fluid motion and improve propulsion, the team next placed three of these actuator pairs end-to-end, creating a 22-cm-long, 5-cm-high, and 1.5-mm-thick robot. “We arranged several of these in such a way that we can get an undulating motion to mimic the motion of an eel swimming,” says Christianson. By applying voltage to the six actuators in diagonal pairs from the front to the back of the eelbot via external cables, Christianson’s group was able to prod the robot into eel-like motion around the tank.

It was at this point in the project, around June 2017, that Dimitri Deheyn, a marine biologist at UCSD’s Scripps Institution of Oceanography, became involved in this research. To see how closely the robot resembled its inspiration, Deheyn used a hyperspectral imaging system that gives every single pixel of the sample its own spectral identity. The more light going through the robot, the less conspicuous it would be in the open ocean. “We were able to have a high percentage of light going through, close to 85 to 95 percent or more, indicating that it is truly a transparent robot as opposed to a translucent robot,” says Deheyn. In areas with a reduced passage of light, the transparency matched that of the bony bits of an eel larva (Sci Rob, 3:eaat1893, 2018).

The researchers also found that they could reproduce another aspect of eel biology in their robot—fluorescence—by adding a dye to the fluid pouch electrode. Certain species of eel naturally fluoresce, possibly as a form of communication during spawning events, or as a way to attract prey. But fluorescence might be useful for under-water robots, too, where other communication channels such as radio waves are impractical, the researchers suggest in their paper.

We want to make a soft robot that can swim around coral reefs without damaging them.

The eel-inspired device isn’t quite ready for use in the oceans, though. The current prototype moves forward at 1.9 mm per second while the electronics package that applies the voltage floats on the surface of the water of the tank. “The speed with which it’s moving is quite slow,” says Stefan Williams, who works on marine robotics at the University of Sydney in Australia and was not involved in the research. “I think there’d be a few challenges around power and building these things at a scale.”

Power’s not the only obstacle stopping the eelbot from competing with existing models being used in marine research. Currently available underwater devices can be remotely operated, launched from ship or shore, and can stay in the water for weeks or months. They also possess sensors that allow scientists to record several parameters such as water salinity, pH, and temperature.

Christianson says the team plans to make its robot “untethered,” thus freeing it to travel farther. In the future, the soft robot could also be modified to have sensors and cameras, although this may alter the eelbot’s weight and translucency.

James Bellingham, the founding director of the Center for Marine Robotics at Woods Hole Oceanographic Institution, who was not involved in the research, says these are “early stages” for the use of soft robots in the marine arena. “The people who are doing this work are still developing the basic tools and exploring the design space. But it’s very exciting to see progress.” 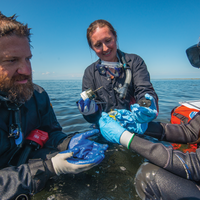 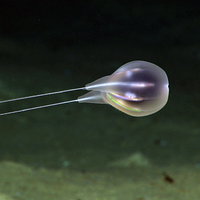