The Albert Einstein College of Medicine neuroscientist has revealed surprising functions of the brain region, such as its role in the brain’s rewards circuits and in addiction.

Nearly 30 years ago, Kamran Khodakhah, now a neuroscientist at Albert Einstein College of Medicine, signed up for a TV repair course that met several times a week at night at a local community college in London. While many of the other students were attending with the obvious goal of repairing TVs and other appliances, Khodakhah had a different aim. He reasoned that if he could understand how a television worked, he could design new tools to study the rat brain slices he had collected.

Khodakhah was working as a PhD student in the lab of neuroscientist David Ogden at the National Institute for Medical Research, trying to determine whether a particular signaling pathway—the inositol trisphosphate (InsP3)/calcium signaling pathway—could be activated in nerve cells called Purkinje neurons. They are found in the cerebellum and have a high density of InsP3 receptors. By taking the...

He used the new imaging setup, combined with existing lab tools such as flash photolysis, to introduce inert precursor molecules of InsP3—called caged InsP3—into Purkinje neurons in cerebellar slices prepared from rat brains. When stimulated with light, a caged InsP3 molecule is rapidly converted into an active form that binds to InsP3 receptors. Khodakhah then used a fluorescent calcium indicator and recorded the calcium channel activity to see if the binding of InsP3 receptors caused release of calcium from internal stores. At the time, researchers knew that in liver and other non-neuronal cells, InsP3 molecules act as messengers, stimulating the release of calcium ions, which then activates internal cellular pathways. Whether something similar happened in Purkinje neurons wasn’t clear, but if it did, the process might reveal something about how the cerebellum coordinates movement, Khodakhah thought. 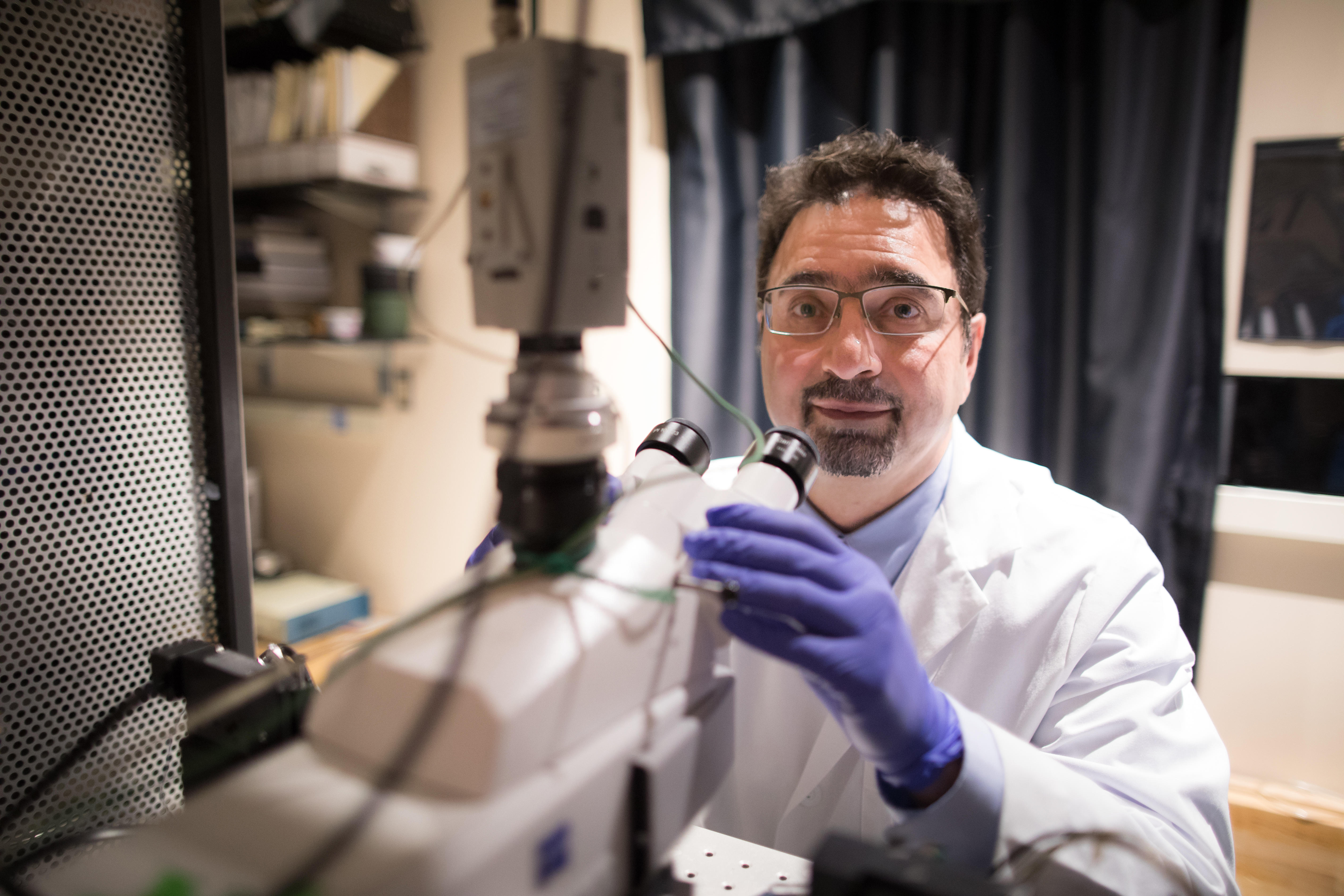 After a year of trying, the study seemed to be a failure—the young doctoral candidate couldn’t show that InsP3 stimulates intracellular release of calcium ions in Purkinje neurons. Then, at 1 a.m. one night in the lab, Khodakhah decided to do something extreme. He added 10 times the dose of caged InsP3 he had been previously using, reasoning that the cerebellum slice itself might be absorbing too much of the light needed to activate the InsP3 molecules. “I did the experiment, and the result was beautiful,” he says.

Purkinje neurons, he found, used the high concentration of InsP3 plus calcium for rapid calcium signaling, and they released tenfold more calcium, on a much faster timescale than non-neuronal cells did.

The work piqued Khodakhah’s interest in the cerebellum, which he would go on to study for the rest of his career.

Khodakhah was born in Tehran, Iran, in 1967, the oldest of three siblings. His mother, Mahin, was an English teacher, and his father, Akbar, who held a doctorate in pharmacy, had served as the chief executive officer of several Iran-based biopharmaceutical companies. Khodakhah recalls a happy childhood: as a kid, he loved solving puzzles and making little electronic gadgets. He also says he enjoyed reading literature and philosophy. After the Iranian Revolution precipitated the ouster of the ruling monarchy in 1979, it became more difficult to obtain Western books, but not impossible, Khodakhah recalls. There was a stretch of road in front of Tehran University that was lined with bookstores that would stack Western books behind the ones on display. “I really enjoyed seeking out the books that were difficult to come by,” he says. “I found it really exhilarating, and that helped form my personality and character.”

At age 16, he went to Bryanston School, a boarding school in Dorset, England. Then, in 1985, he enrolled at King’s College at the University of London to study pharmacology and became intrigued by the puzzles of biology. He began to do research in the late Alan Prince’s electrophysiology laboratory, learning to measure neurotransmitter release from  rat brain slices. During his senior year, Khodakhah met Ogden and was introduced to methods to measure single ionic channel activity. “You could hear the gurgling sound when the channels opened and current was flowing,” he recalls. “Seeing and hearing a live protein perform its function—that was the moment I fell in love with physiology,” he recalls.

“How the brain works was and still is a complete mystery,” Khodakhah says, “and I was drawn to trying to solve this ultimate puzzle of how consciousness comes from this organ.”

After joining Ogden’s lab, which was in the process of moving to the National Institute for Medical Research, now the Francis Crick Institute, Khodakhah started working on the InsP3-calcium signaling in Purkinje neurons and, when he had finished his PhD, moved to the US in 1992 to do a postdoc in Clay Armstrong’s biophysics laboratory at the University of Pennsylvania. There, Khodakhah continued to study Purkinje neurons, this time as a model of synaptic plasticity—the way that neurons modulate their signaling strength to learn new things, such as how to perform appropriate muscle movements. “Synaptic plasticity is akin to learning to throw a ball at the right strength, so you don’t throw it too far or not far enough,” Khodhakah explains.

Armstrong told Khodakhah that he needed to build his own equipment—including his own amplifier, to increase the power of the measured electrical signal in the neurons. “The experience was invaluable because it taught me to be nimble in creating the tools I need,” Khodakhah says. “In my own lab, if we want to push technology forward, we sit and build our own circuits, or create a new computer program rather than waiting around for someone else to do it for us.”

In Armstrong’s lab, Khodakhah demonstrated that calcium release in rat Purkinje neurons is sufficient to tamp down the strength of the cells’ synaptic inputs. This dialing down of the input is called long-term synaptic depression and is a neuronal mechanism by which the cerebellum learns to perform motor tasks. Khodakhah’s work also showed that InsP3 molecules are needed to execute the dialing down of the signal.

Khodakhah spent five years in Armstrong’s lab before accepting an assistant professorship at the University of Colorado Health Sciences Center in Denver. A year later, the National Ataxia Foundation awarded him a $15,000 grant—the first grant of his career and one that he says changed his professional trajectory. Unlike the basic science grants that he had previously applied for, this award forced Khodakhah to link the dysfunction of Purkinje cells to motor conditions such as impaired coordination, or ataxia. “I realized that those who donated the money were putting their hope in me to help patients,” he says.

This also made him realize that neuroscientists did not precisely know how the cerebellum controlled movement and how its dysfunction led to impaired coordination. Prior to receiving the grant, Khodakhah recalls struggling to explain the significance of his research, but that lack of understanding of how brain activity is tied to motor output made it abundantly clear.

In 2001, Khodakhah moved to the department of neuroscience at the Albert Einstein College of Medicine in New York, where he continued to study Purkinje cells. These neurons, he explains, have a regular pacemaker-like firing, which is crucial to motor coordination. In 2002, Khodakhah, with postdoc Mary Womack, found that calcium ion signaling is crucial for the intrinsic baseline firing and function of these neurons.

In my own lab, if we want to push technology forward, we sit and build our own circuits, or create a new computer program rather than waiting around for someone else to do it for us.

If Purkinje cell pacemaking is crucial for motor control, Khodakhah reasoned, then there are probably genetic mutations that affect the pacemaking activity that are linked to ataxia disorders. The lab found one such mutation in the literature, in the gene that encodes the calcium channel in Purkinje neurons. The mutation, previous work showed, causes episodic ataxia type-2 (EA2). In 2006, Khodakhah’s lab showed that mice with a mutation in the calcium channel have Purkinje neurons that produce an irregular firing pattern. Introducing a drug called 1-ethyl-2-benzimidazolinone (1-EBIO), which targets calcium-dependent potassium channels, directly to the cerebellum reestablished the rhythmic pacemaker-like firing, which improved the motor movements of the mice. The researchers then found that a FDA–approved analog called chlorzoxazone was also effective in reducing ataxia in mice when delivered orally. Several pharmaceutical companies are now planning to test such drugs in clinical trials to potentially correct EA2 and other forms of ataxia in humans.

While investigating factors that control Purkinje neuron pacemaking, Khodakhah realized that cerebellar dysfunction can also contribute to dystonia, a different form of motor dysfunction. Dystonia was previously thought to arise as a consequence of dysfunctional basal ganglia—brain regions deep within the cerebral hemispheres. However, the lab found that cerebellar dysfunction affects basal ganglia activity via a synaptic pathway routed through the thalamus. “Our findings have provided a number of new targets for pharmacological and surgical management of dystonias,” Khodakhah says.

Digging deeper into the literature, Khodakhah found that there are striking correlations between perturbations of the cerebellum and certain brain disorders. For example, people with damage to the cerebellum have an increased risk of developing autism, and a smaller cerebellum has been associated with a diagnosis of schizophrenia. Additionally, brain scans of individuals recovering from addiction who were presented with cues related to their addiction showed higher blood flow in the cerebellum compared to scans of the brains of healthy individuals.

Research has also pointed to the cerebellum’s possible role in release of dopamine, a neurotransmitter involved in the brain’s reward pathways. Based on the literature, two trainees in Khodakhah’s lab, Ilaria Carta and Christopher Chen, decided to examine whether the cerebellum is indeed interacting with the ventral tegmental area (VTA)—a part of the midbrain brain involved in reward circuitry—and plays a role in rewards and social behaviors. The team inserted genes that produce light-sensitive proteins into select cerebellar neurons in vitro and in mice and stimulated those neurons with light. When the cerebellar neurons that extended to the VTA were optogenetically stimulated, the VTA neurons fired more often.

Chen and Carta then assessed whether these connections between the cerebellum and VTA influenced the mice’s behavior, stimulating the cerebellar neurons while the animals were free to move around a brightly lit chamber. Mice generally avoid such bright spaces, but after repeated stimulation while in the chamber, the mice began to prefer it over a dark chamber when given the option. The finding supports the cerebellum-VTA connection’s role in reward seeking and addictive behavior, Khodakhah and colleagues reported in Science this January.

“I think these results are going to reintroduce the cerebellum as a major brain region that contributes to cognitive and emotional processes,” Khodakhah says.

His team already has more findings that support the cerebellum’s contribution to addictive behavior, and in particular to the solidifying of a neurally stimulating behavior such as drug use. Such memory-making may render some individuals more susceptible to addictions. “One of the biggest problems is that those who are addicts [or former addicts] can be weaned from their addiction but if there is a new stress, the person is very susceptible to relapse,” Khodakhah says. “We think the reason is that there is a signature of the memory within the cerebellum. . . . If we understand that better we might be able to provide pharmacological or other therapeutic interventions to help these individuals.”

Anna Azvolinsky is an independent New York City-based science and health journalist. Follow her on Twitter at @annaazvolinsky and read her work at https://annaazvolinsky.com/.