In plants, guard cells control the stomatal opening by expanding and contracting through ion flux. When a plant senses light, a signal is sent to the guard cell to increase its ion content, which causes the cell to take in water and swell in size. In this state, the stoma is open so that it can start taking in carbon dioxide for photosynthesis. When there’s no light available for photosynthesis, the plant closes its stomata so it doesn’t lose water through evaporation. Biologists suspected that the speed at which the guard cells react to changing conditions affects plants’ productivity and water use efficiency. 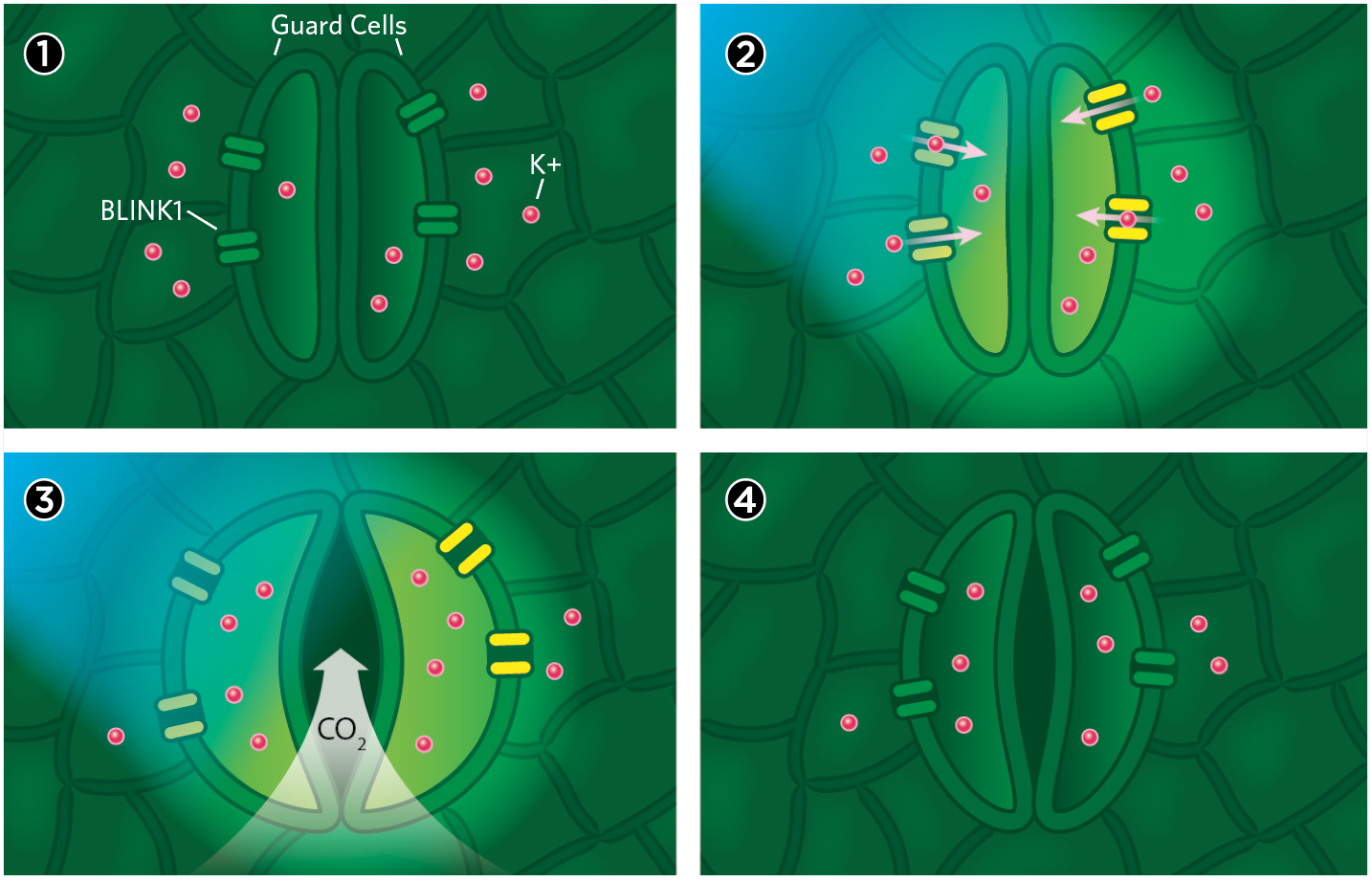 OPEN AND SHUT: To test whether speed of stomata opening and closing can...

To test this idea, a team of researchers borrowed a tool from neurobiology: optogenetics, which enables scientists to use light to control membrane voltage and thus activate neurons experimentally. Changing the voltage of a cell is relatively easy, says study coauthor Michael Blatt of the University of Glasgow, “but it’s much more of a challenge to move enough ions to change the total ion content of the cell.” The researchers used genetic engineering and a cell-specific promoter to add BLINK1, a light-controlled synthetic potassium channel, to guard cells in Arabidopsis thaliana to see if they could move enough ions for the cells to take in water and increase in size.

Within two minutes of exposure to blue light, the BLINK1 channel opened, allowing potassium ions to move into the cell. The guard cells swelled as a result, making the stomata bigger.

Plants with the BLINK1 channels were able to open the stomata more quickly than control plants, presumably allowing them to get carbon dioxide sooner. The modified plants were also able to close their stomata more quickly than the controls when put in darkness, preventing them from losing water unnecessarily. Likely due to their increased efficiency, the plants with BLINK1 grew 2.2 times faster than control plants kept under the same conditions, the authors report.

“It’s quite interesting and very innovative,” says plant electrophysiology researcher Nathalie Leonhardt of France’s Biosciences and Biotechnologies Institute of Aix-Marseille who was not involved in the study. The study’s setup exposes the plants to fluctuations and quick changes in light that demonstrate the effect of the channel, says Leonhardt. But she adds that those conditions are “not very realistic,” and that natural light levels might not fluctuate as quickly. Thus, BLINK1’s speed may not offer much of an advantage in the field.

Blatt notes that this study is a proof of concept, and the first demonstration that it is possible to engineer crops to improve water use efficiency without sacrificing growth by controlling the speed of the opening and closing of the stomata. The next step, he says, is to look into other ways to change that speed without the use of the BLINK1 channel, such as by studying genes that affect guard cells’ capacity to change size.