To kill a cell, methicillin-resistant Staphylococcus aureus discharges an arsenal of toxins. Alpha-toxin is one of its favorites, forming a cylinder of sharp peptides that punches a hole in the host cell, popping it. MRSA is extremely virulent and resistant to many antibiotics, leading scientists to search for ways to defeat it.

Bacteriologist Victor Torres and cell biologist Ken Cadwell, both of New York University Grossman School of Medicine, had found in previous work that a key protein involved in autophagy also makes mice less susceptible to MRSA and alpha-toxin. But what was the connection between autophagy and MRSA infection? To find out, Torres, Cadwell, and graduate student Matthew Keller depleted the autophagy protein ATG16L1 in a human cell line and found that the cells then displayed unusually high numbers of a transmembrane protein called ADAM10 on their surfaces. Alpha-toxin binds to ADAM10 in order to puncture the cell, and when these cells were treated with alpha-toxin, they were more likely to die than control cells that had normal levels of ATG16L1. 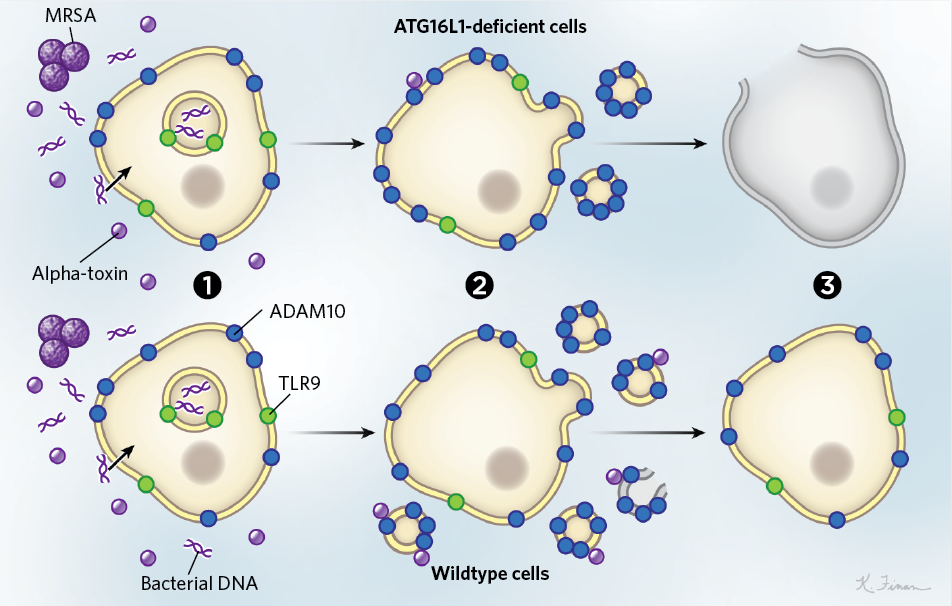 PUNCTURE THIS: Based on experiments with mice and cultured human epithelial cells, researchers pieced together how hosts can use exosomes to defend themselves against bacterial toxins. Host cells detect the presence of bacteria using a receptor called TLR9, which senses bacterial DNA (1). In wild-type mice, host cells respond by releasing exosomes studded with the protein ADAM10, which act as decoys, but mice deficient in an autophagy protein called ATG16L1 release far fewer of the decoy exosomes (2), indicating the autophagy protein is necessary to mount an effective exosome response. Indeed, while MRSA’s alpha-toxin binds the host receptor ADAM10 on exosomes in wildtype mice, destroying the vesicles, in mice lacking ATG16L1, alpha-toxin binds ADAM10 on host cells, forming a pore and killing cells (3). WEB | PDF
© Kelly Finan

Further experiments revealed that ATG16L1 and other autophagy proteins regulated the cultured cells’ release of exosomes, small bubbles of cytosol wrapped in plasma membrane and studded with the cell’s own proteins. The presence of bacteria, particularly their DNA, was necessary for the release of exosomes from the cell, the team found. When the cultured cells had normal levels of autophagy proteins and were exposed to bacterial DNA, they released far more exosomes laden with ADAM10 than did the ATG16L1-deficient cells.

Western blots for alpha-toxin showed that the compound bound preferentially to exosomes from ATG16L1-rich animals that had ADAM10, and further experiments demonstrated that decoy exosomes worked in mice as well: exosomes from wild-type mice, but not those from ATG16L1-deficient mice, prolonged survival when transferred into MRSA-infected mice. Exosomes also protected other cells from two additional bacterial toxins, leukotoxin ED and diphtheria toxin.

The team found that the innate immune receptor TLR9 senses bacterial DNA in human and mouse cells and triggers exosome release, although the team hasn’t yet determined all the steps in the pathway. “The fact that triggering that innate immune pathway leads to production of exosomes makes us fairly confident that this isn’t some accident—this is the host defense response,” says Cadwell.

The work is “one of the more extraordinary papers that I’ve seen,” says emeritus cell biologist Philip Stahl of Washington University School of Medicine in St. Louis who reviewed the study for Nature. “It’s really uncovering new territory in exosome biology.”

Whether exosomes could be used in the future as a treatment to minimize damage during an infection remains to be seen. Also worth exploring, Torres and Cadwell say, are the possible effects on infection resistance of a human ATG16L1 variant that’s common in the population.