Earlier this year, immunologist Adam Lacy-Hulbert of the Benaroya Research Institute in Seattle and his former postdoc Anna Bruchez were writing up their discovery of a previously unknown immune pathway that defends cells against Ebola virus. Then SARS-CoV-2 hit the US. The two suspected that the pathway provided broad antiviral defense, so they decided to test it against the novel coronavirus.

In the Ebola experiments, Lacy-Hulbert, Bruchez, and their colleagues had been using a genetic screen called transposon-mediated gene activation to search for natural antiviral mechanisms within cultured human bone cancer cells. Transposons, mobile genetic elements found throughout the genome, can be added to cells to knock out genes they randomly insert into. The team had integrated a promoter sequence into the transposons so that, in addition to knocking out some genes, they would turn other genes on. After adding these transposons to flasks of human cells, Bruchez introduced viruses engineered to express an Ebola glycoprotein, killing most of the cells. The team genotyped the few cells that remained and discovered two genes that were crucial to the cells’ survival: NPC1 and CIITA. 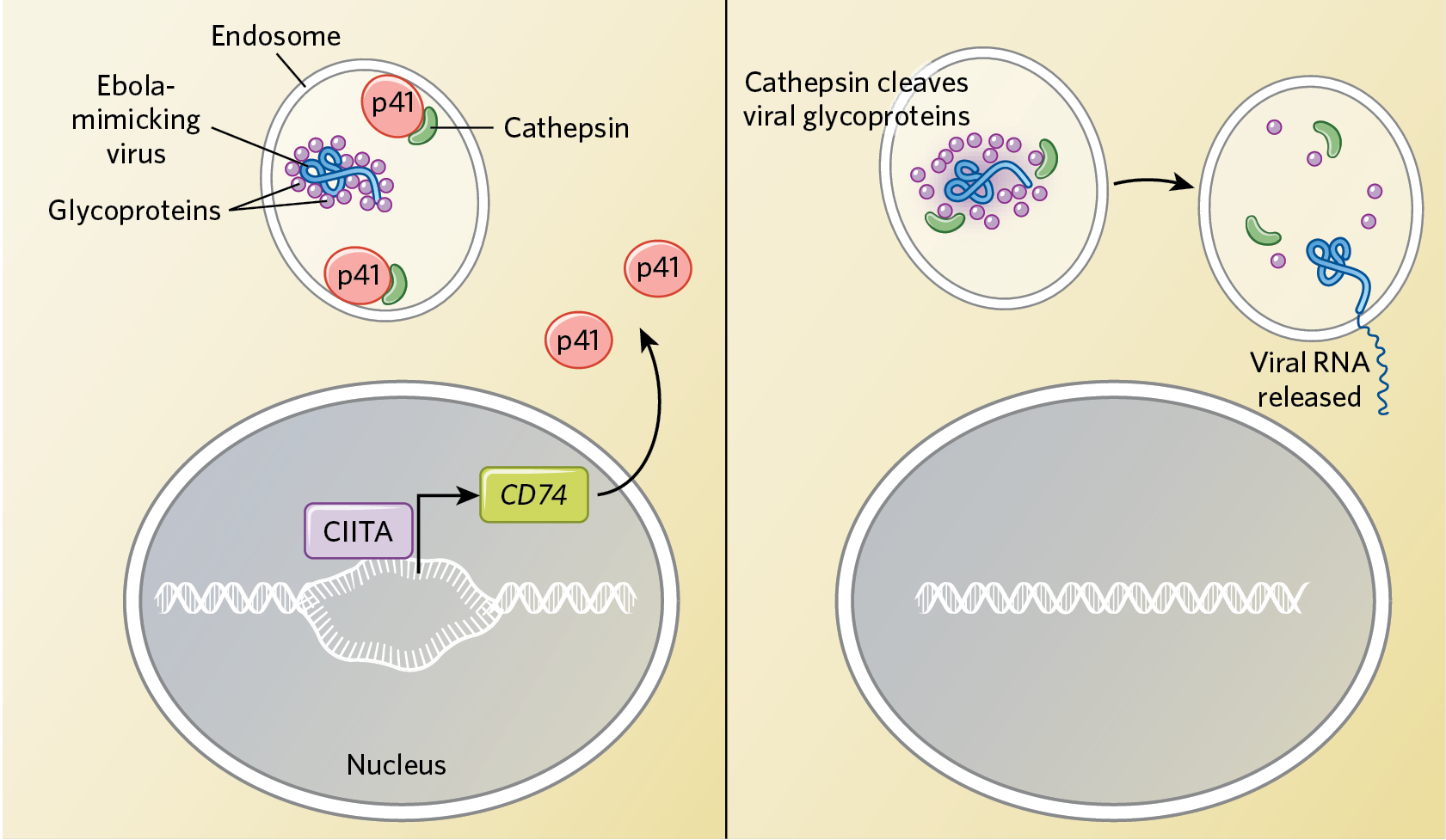 TRAP AND KILL: Overexpressing the transcription factor CIITA in cultured human cells turns on a gene called CD74, producing the protein p41, which binds to cathepsin proteases in the endosome (left). When the cells are exposed to an Ebola-mimicking virus, the p41-bound cathepsins are unable to cleave off the virus’s glycoprotein,  stopping it from fusing with the membrane and thus trapping it inside the endosome. Later, the virus is likely brought to lysosomes and destroyed (not pictured). In a cell where CD74 is not overexpressed (right), cathepsins cleave the virus’s glycoproteins, enabling it to fuse with the side of the endosome and release its genetic material into the cytosol. WEB | PDF
© KIMBERLY BATTISTA

NPC1 encodes the receptor that Ebola virus binds to, but CIITA was more mysterious. It encodes a transcription factor that regulates major histocompatibility complex (MHC) genes, which code for the cell surface proteins that present foreign substances to adaptive immune cells. But the team’s cultures lacked adaptive immune cells (such as T cells), suggesting a more primitive type of defense was occurring. To find out what it was, the team knocked down each of the genes that CIITA regulates, and found one, CD74 (which encodes part of the MHC), that was key to cell survival. One isoform in particular, p41, could keep CD74 knockout cells alive in the face of the virus with the Ebola glycoprotein. Electron microscopy showed that, in cells expressing p41, the glycoprotein remained trapped inside the endosomes that housed the engineered viruses after they were internalized by the cell. The p41 protein binds to proteases called cathepsins, preventing the enzymes from cleaving the Ebola glycoprotein, thus stopping the fusion of the virus with the endosome and the release of the viral genome into the cell, the team demonstrated.

The group found that p41 inhibited entry of SARS-CoV-2 into the cells as well. Lacy-Hulbert suggests that this pathway could trigger broad resistance to viruses and that this “might have been CIITA and CD74’s original role. Then that activity got co-opted into the adaptive immune system, which evolved later.”

Virologist Yong-Hui Zheng of Michigan State University says the study makes a strong case that CIITA and CD74 mitigate Ebola infection in vitro via cathepsins. But he notes that a 2012 study in mice showed that knocking out cathepsins does not prevent Ebola infection, and he questions the importance of the CIITA/CD74 pathway as a primary antiviral mechanism in animals and humans. In addition, SARS-CoV-2 does not depend solely on cathepsins to infect cells, he notes. But Lacy-Hulbert says it’s likely the viruses use different proteases for entry depending on the cell type they’re infecting, and it’s possible that CIITA and CD74 p41 can block other proteases as well. He adds, “the pathways we have identified are likely to be important in animals and humans, but may need to act in combination with other pathways.”