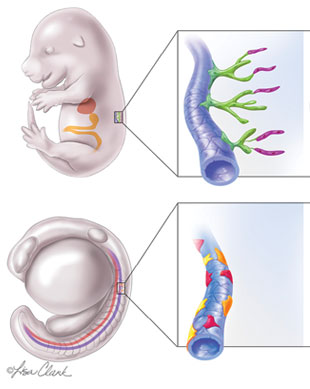 For 10 years, Karina Yaniv has worked to find out just how much zebrafish have in common with mice—at least when it comes to their lymphatic systems, the open-ended networks of vessels best known for draining fluids from tissues and providing thoroughfares for immune cells throughout the body. Yet in doing so she ended up discovering something that had very little in common...

“It was scary—I’m a young PI, so it’s not easy to stand up against the stream,” says Yaniv, who studies developmental biology at the Weizmann Institute of Science in Rehovot, Israel. But it turns out she isn’t the only one. Within three months of each other, two other independent groups published their unexpected findings supporting new roles for nonvenous progenitor cells in lymphatic development.

“I think it opens up a whole [research] area,” says Paul Riley, a cardiovascular researcher at the University of Oxford who led a team that identified a nonvenous source of cells seeding the lymphatic system in developing mouse hearts.

Yaniv’s and the others’ work is adding a new chapter to the story of lymphatic development, one that began with the ancient Greeks.

A bit of history

Lymphatic vessels were first described by the ancient Greek physician Hippocrates, and have been studied in earnest since the 17th century. Despite their long history, new functions and locations of lymphatic vessels are still being identified, and researchers now know they do much more than simply drain tissue fluids: lymphatics transport immune cells, fats, and lipids; regulate fat cell production; promote metastases; and maintain eye health. Just a few months ago, researchers identified lymphatics in mouse brains for the first time—smashing a long-held assumption that the brain lacked any such structures.1

Scientists first began to uncover how lymphatics form in the early 20th century. In 1902, anatomist Florence Sabin conducted experiments in which she injected ink into the veins of embryonic pigs. Her observations led her to propose that, during development, lymphatic vessels sprouted solely from existing veins.2 Her model would not be confirmed until 100 years later, thanks in large part to a method called lineage tracing, which permanently marks cells when certain developmental genes are expressed, allowing researchers to detect when and where a gene was active even after it’s been turned off.

In the meantime, most anatomists accepted Sabin’s vein-origin theory, although a sprinkling of papers over the years hinted otherwise. Biologists George Huntington and Charles McClure suggested an alternative, nonvenous source for lymphatic vessels in 1910, when they found evidence in cat embryos that cells from outside the veins gave rise to lymph sacs that later connected with veins.3 “If we look at all the publications from the beginning of the last century, there were clues there suggesting a mixed origin,” says Yaniv.

It’s taken a very long time to understand what we were seeing.—Taija Mäkinen,
Uppsala University

Later, evidence from bird and frog embryos suggested that lymphatics could arise from progenitors called lymphangioblasts as well as from veins, and reports of alternative lymphatic cell sources in mice, such as blood cell progenitors, appeared in the literature as markers became available to distinguish different types of endothelial cells, the building blocks of both lymphatic and blood vessels.4-7

Still, without technologies such as lineage tracing, researchers couldn’t definitively verify the sources of lymphatic endothelial cells (LECs). Then, in 2007, Guillermo Oliver, a developmental geneticist at St. Jude Children’s Research Hospital in Memphis, Tennessee, and colleagues used lineage tracing to confirm that, on the whole, Sabin had been right. In developing mouse embryos, venous endothelial cells gave rise to structures called primary lymph sacs, which in turn sprout and spread cells that make up lymphatic vessels.8 The question of where lymphatic vessels came from was largely settled and replaced with questions about how blood vessel cells differentiate into lymphatic cells.

To explore lymphatic cell differentiation in zebrafish, Yaniv designed and acquired new transgenic lines that produced unique fluorescent proteins in different types of endothelial cells. Her team then began imaging its see-through model of vertebrate development in real time to find out which molecular signals triggered venous endothelial cells to become LECs. But the researchers soon realized that lymphatic development in zebrafish doesn’t exactly follow Sabin’s model. “In combining these many lines, we got to this surprising finding that not all lymphatic endothelial cells come from the same place,” Yaniv says.

While she did see that LECs were sprouting off of veins, the cells directing the sprouting, called LEC progenitors, were not your run-of-the mill venous endothelial cells. They were located on just one side of a large vessel called the posterior cardinal vein, and they seemed capable of developing into lymphatic vessels, arteries, and veins, making them a different kind of multipotent progenitor. Yaniv’s data suggested that these so-called angioblasts migrated into the vein from someplace else before sprouting into lymphatic cells, which would mean venous endothelial cells were not the only source of LECs (Nature, 522:56-61, 2015).

At first, Yaniv and her students were skeptical that these cells were serving as a new source of LECs. But Yaniv soon learned that Riley had collected data that demonstrated a contribution of nonvenous cells to the lymphatics taking shape in embryonic mouse hearts (Nature, 522:62-67, 2015). “We were very happy to find out that we were basically seeing the same thing,” says Yaniv.

Like Yaniv, Riley had not set out to challenge the existing understanding that all LECs sprouted from veins. He simply wanted to characterize lymphatic development in the mammalian heart. His team used lineage tracing to tag cells expressing a gene transcribed in blood vessel endothelial cells called Tie2 and LEC-specific genes, expecting the markers to overlap. But, he says, “when we looked at Tie2 labeling, we didn’t see the entire lymphatic bed light up.” About 20 percent of the heart LECs they analyzed didn’t express Tie2 or other blood endothelial cell genes, meaning these cells were coming from someplace else.

It’s now clear that not all lymphatic endothelial cells come from veins, though where these cells do originate is still largely a mystery.

And just a few months before Yaniv and Riley published their results, a third group, led by Taija Mäkinen at Uppsala University in Sweden, described clusters of LECs situated along the mesenteric blood vessels that supply the developing mouse digestive tract (Cell Reports, 10:1708-21, 2015). Mäkinen was surprised to find that these clusters did not branch off of existing veins. “It’s taken a very long time to understand what we were seeing,” she says.

Ultimately, her group showed that a multipotent cell type called a hemogenic endothelial cell was contributing to mesenteric lymphatic vessel development. The team went on to examine the origins of lymphatics in skin and found a similar story. Again, isolated clusters of LECs appeared, this time in the dermal layer of skin covering the lower back region of mouse embryos, where some lymphatic vessels could form without Tie2 being expressed (Circ Res, 116:1649-54, 2015).

According to Oliver, who was not part of the four new studies, the possibility of a nonvenous contribution to lymphatics has always been on the table to some extent. “In a way, it’s not surprising that there is some heterogeneity,” he says.
In the field of embryonic development, it is notoriously difficult to prove the origins of specific cell types beyond a shadow of a doubt. Lineage tracing has helped, but it has its limitations. The technique depends on an enzyme called Cre recombinase that cuts out genes, or removes stop codons to allow production of fluorescent tracking proteins. Scientists control Cre recombinase by sticking it in front of a cell-specific gene, like Tie2, or by programming it to work only in the presence of certain drugs.

When using lineage tracing, “you have to be very careful with your interpretation,” says Riley. Sometimes, he says, the gene you choose to drive the Cre enzyme may not be as specific as you thought. Oliver adds that lineage tracing never labels cells or deletes genes with 100 percent efficiency, and even missing one or two cells can cause big problems if those cells divide and make major contributions to developing structures.

Because of these caveats, making conclusions about cellular origins usually requires a lot of corroborating data from several transgenic animal lines, each tracing a different developmental gene. Riley says he had to see evidence from at least three mouse lines before he was convinced of the mixed origins giving rise to lymphatics in the heart. But it’s now clear that not all LECs come from veins, though where these cells do originate is still largely a mystery.

Recently, Mäkinen’s group found evidence that the hemogenic endothelial cells that contribute to mesenteric lymphatics come from the embryonic yolk sac, but she has not yet identified the source of the nonvenous LEC progenitors found in skin. “Because of technical reasons we have not yet been able to dissect it in detail,” she says.

Similarly, Riley thinks it’s possible the nonvenous LECs in the heart may also come from the yolk sac, but his team has not yet been able to prove it. “All we can really say is there are extra-cardiac sources of LECs,” he says. Riley says that the “jury’s still out” on whether organs other than the heart, skin, and mesentery also utilize extra-venous sources of LEC progenitors.

As all three groups chase the nonvenous LEC progenitors back to their roots, they continue looking forward to what could be done with this new information. Yaniv, for example, generated a new cell culture model for human LEC development by treating human stem cells with a molecule that regulates differentiation of the zebrafish angioblasts she identified into LECs.

For his part, Riley says he’s most interested in what role lymphatics plays in heart repair. His team showed that lymphatic vessel growth helped improve heart function after a myocardial infarction. He wants to find out whether that’s through better drainage, immune cell delivery, or some other mechanism. David Long, a developmental biologist at the UCL Institute of Child Health in London, says that the concept of lymphatics being altered by disease is just starting to be appreciated. His group recently showed that kidney lymphatics are abnormal in mice with polycystic kidney disease. He plans to collaborate with Riley to characterize lymphatic development in the kidneys to better understand the disease.

Although Oliver says it’s likely that most if not all organ lymphatics will turn out to have mainly venous origins, he adds that it’s completely possible that any day, someone could find something completely different in an unstudied organ or during a particular type of infection or cancer. “That’s what is exciting about the field,” he says.

Yaniv agrees. She sees venous and nonvenous LEC progenitors as two pieces of an ongoing puzzle, rather than opposing models. Despite generating evidence in opposition to the old dogma, she says, “I don’t want this to become a new dogma.” 