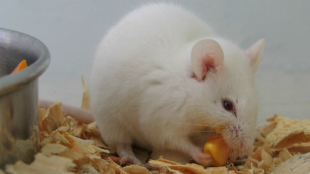 “Up until now, the scientific community thought that leptin acts exclusively in neurons to modulate behavior and body weight,” Horvath said in a press release. “This work is now changing that paradigm.”

In their study, the authors noted that there were hints that a particular type of glial cell, called an astrocyte, might respond to leptin and take an active part in the leptin signaling that goes on in the hypothalamus. To test this, they knocked out leptin receptors in the astrocytes of adult mice and found that the cells were smaller and...

The researchers then injected leptin receptor-knockout mice with the hormone, finding that its normal appetite-blocking effects were diminished. When they administered a hunger hormone, ghrelin, the knockout mice ate more than the control animals did. “These data reveal an active role of glial cells in hypothalamic synaptic remodeling and control of feeding by leptin,” the authors wrote. Whether proper functioning of glia in leptin signaling has a role in obesity still needs to be worked out.