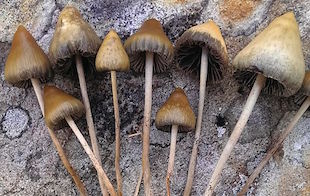 Magic mushrooms (Psilocybe semilanceata)WIKIMEDIA, SCIENCEMAN71So-called magic mushrooms may have medicinal uses. Researchers at Imperial College London gave psilocybin, the active ingredient in the hallucinogenic fungi, to 12 people with treatment-resistant depression. All 12 patients saw improvement in their symptoms, and five of them were still in complete remission three months after treatment, according to a study published today (May 17) in The Lancet Psychiatry.

“That is pretty remarkable in the context of currently available treatments,” study coauthor Robin Carhart-Harris of Imperial College told Nature News. “We can give psilocybin to depressed patients, they can tolerate it, and it is safe. This gives us an initial impression of the effectiveness of the treatment.”

Carhart-Harris and colleagues gave six men and six women with unipolar treatment-resistant major depression two oral doses of psilocybin (one low-dose and one high-dose) seven days apart, in a “supportive setting.” The patients...

None of the patients reported experiencing serious adverse outcomes. Some said they experienced side effects including mild anxiety, confusion, nausea, and headache, but these were short-lived. The small study did not include a control group.

Research of psychedelics ground to a halt in the 1960s and 1970s after these substances were banned, but it has slowly been making a comeback. Previous studies have investigated the therapeutic use of psilocybin for obsessive-compulsive disorder, tobacco and alcohol dependence, and anxiety in terminal cancer patients, but this is the first to look specifically at treatment-resistant depression.

“Seeing effect sizes of this magnitude is very promising, they are very large effect sizes in any available treatment for depression,” Carhart-Harris told BBC News. “We now need larger trials to understand whether the effects we saw in this study translate into long-term benefits.”