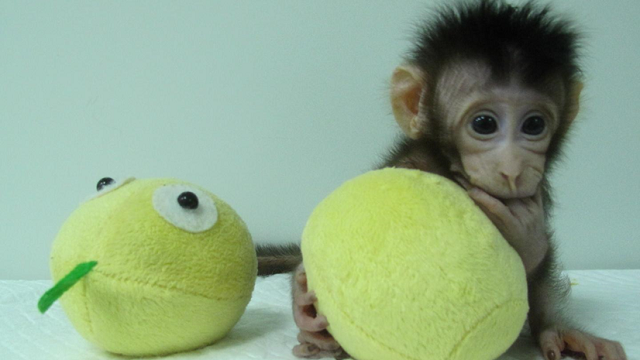 Hua Hua, one of two monkeys cloned by somatic cell nuclear transferQIANG SUN & MU-MING POO, CHINESE ACADEMY OF SCIENCESResearchers in China have created the first viable primate clones made using somatic cell nuclear transfer (SCNT), according to a study published yesterday (January 24) in Cell. Two newborn macaques, named Zhong Zhong and Hua Hua, were produced at the Chinese Academy of Sciences’ Institute of Neuroscience (ION) in Shanghai using the same technology made famous by Dolly the Sheep, and could represent a novel model system for scientists studying human biology and disease.

“This paper really marks the beginning of a new era for biomedical research,” Xiong Zhi-Qi, a researcher studying brain disease at the ION but who was not involved in the work, tells Nature.

These monkeys are not the first primates to be cloned. A rhesus macaque named Tetra was produced in the late...

Adapting the approach to monkeys proved difficult, and many attempts by the Chinese team failed: the researchers transferred 79 embryos into surrogate monkeys for just two viable births. “The SCNT procedure is rather delicate,” study coauthor Mu-ming Poo, director of ION, says in a statement. “The faster you do it, the less damage to the egg you have. . . . It is likely that the optimization of transfer procedure greatly helped us to achieve this success.”

Many researchers have been quick to pour water on the idea that the team’s results bring scientists closer to cloning humans. “The work in this paper is not a stepping stone to establishing methods for obtaining live born human clones,” Robin Lovell-Badge of the Francis Crick Institute in London tells reporters (via the The Independent). “This clearly remains a very foolish thing to attempt, it would be far too inefficient, far too unsafe, and it is also pointless.”

But Poo emphasizes that this is not the team’s goal. “There is now no barrier for cloning primate species, thus cloning humans is closer to reality,” Poo tells reporters (via The Guardian). “However, our research purpose is entirely for producing non-human primate models for human diseases; we absolutely have no intention, and society will not permit, this work to be extended to humans.”