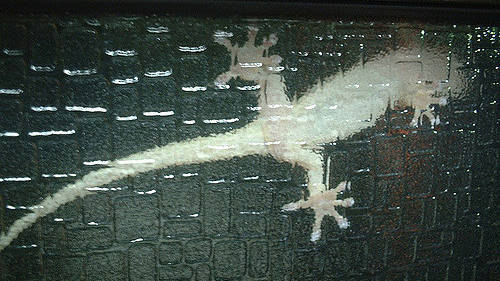 FLICKR, BIZMACFor years, researchers have recreated the microscopic hair-like pillars on gecko feet that, through atomic forces known as van der Waals’ interactions, allow the animals to scurry up walls and across ceilings. Such gecko-inspired adhesives could have a variety of applications, including medical bandages, but materials scientist Seokwoo Jeon at the Korea Advanced Institute of Science and Technology (KAIST) and colleagues wanted to apply these materials to create a novel wearable electrode.

The team created the microscopic pillar design by pouring a mix of conductive carbon nanotubes, graphene nanopowder, and a silicone known as polydimethylsiloxane into a mold shaped like a series of 15 µm golf tees and letting the elastomer cure for two hours at 120 °C. The resulting 4-inch by 4-inch square patch can be attached and removed from skin 30 times without losing its stickiness, and the patch retained its electricity-conducting ability even when...

The new material could be “crucially important in next-generation skin-like technologies for wearable electronics,” John Rogers, a materials science professor at the University of Illinois, Urbana-Champaign, who was not involved in the work, told Chemical & Engineering News (C&EN).

Jeon and colleagues now hope to try other materials to give such gecko-inspired adhesives different properties. “For example, fillers with functionalities such as thermal conductivity, magnetism, and luminosity are excellent candidates for realizing different types of multifunctional, self-adhesive platforms,” he told C&EN.