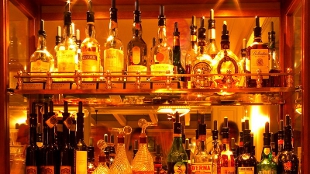 WIKIMEDIA, XLIBBERThe neurofibromatosis type 1 (Nf1) gene, which has been previously linked to alcohol dependence, may exert its influence on alcohol intake through the regulation of gamma-aminobutyric acid (GABA), a neurotransmitter known to decrease anxiety and boost feelings of relaxation, according to a mouse study published this month (August 18) in Biological Psychiatry. The research, led by scientists at The Scripps Research Institute (TSRI), also links variations in the human Nf1 with the risk and severity of alcohol dependence.

“Despite a significant genetic contribution to alcohol dependence, few risk genes have been identified to date, and their mechanisms of action are generally poorly understood,” coauthor Vez Repunte-Canonigo said in a press release.

The team decided to look for a connection with the neurotransmitter GABA as a result of previous work that has shown GABA release in the central amygdala, a brain area involved in decision making, stress,...

The researchers also explored variation in human Nf1 using data from some 9,000 people and found the gene correlated alcohol-dependence risk and severity. “A better understanding of the molecular processes involved in the transition to alcohol dependence will foster novel strategies for prevention and therapy,” coauthor Pietro Paolo Sanna said in the release.