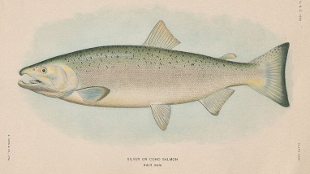 WIKIMEDIA, US DEPT OF COMMERCE AND LABOR BUREAU OF FISHERESSeven US government fisheries scientists this week (January 7) made a formal complaint in which they claim that an administrative official planned to shut down their department because results of their research into the fate of species of salmon under threat in the Klamath River Basin, Oregon, ran counter to those of other agencies.

“This falls into the basket of obstruction of science for policy or political ends,” Jeff Ruch, executive director of the Washington DC-based watchdog Public Employees for Environmental Responsibility (PEER), told Nature. PEER sent the letter of complaint to the Department of Interior on behalf of scientists at the US Bureau of Reclamation office in Klamath Falls, who have worked on predictive models for the survival and recovery of the threatened coho salmon (Oncorhynchus kisutch), which many environmentalists believe is suffering due to a...

Last November, Klamath Basin Area Manager Jason Phillips outlined plans to reassign scientists from the Bureau’s Fisheries Research Branch (FBR), effectively eliminating the department. In the letter of complaint, the scientists allege that Phillips’s actions stemmed from his belief that their predictive models ran counter to the findings of the US Fish and Wildlife Service (FWS) and the National Oceanic Atmospheric Administration (NOAA).

“Since the NOAA Fisheries had raised concerns regarding this model, Mr. Phillips stated that he did not intend to allow the model to be published, be ‘shelved’ and not used by Reclamation on its decision making process,” read the letter.  “Mr. Phillips further stated that he was eliminating the Fisheries Resources Branch so that this kind of work would no longer cause problems for NOAA Fisheries.”

Phillips told Nature the plans are not related to the research, though he acknowledged that he had received complaints from the FWS and NOAA about how some FBR scientists in responded to criticisms during standard scientific reviews. Pete Lucero, a regional spokesperson for the Bureau, confirmed the move is part of a routine re-organization.