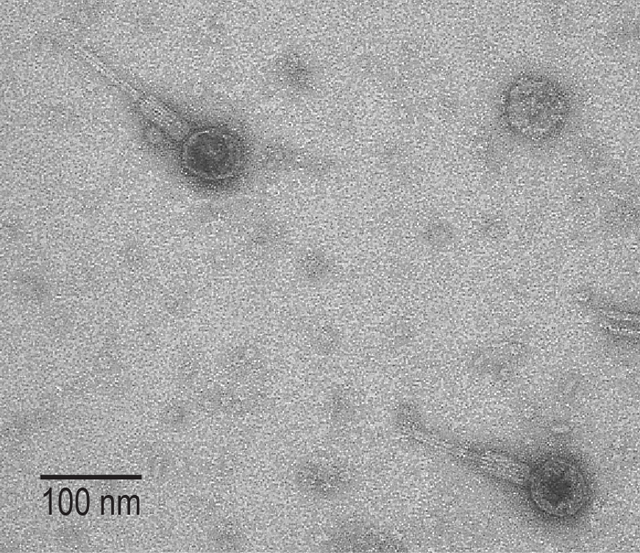 Transmission electron micrograph of a novel phage isolated from E. coli retrieved from a woman's bladder. The structure of its tail suggests it belongs to the family Myoviridae.ANDREA GARRETTOResident viruses of the body can affect the structure and behavior of the microbiome, yet scientists know little about the phages—those viruses that infect bacteria—that live in many areas of the body. Now, researchers have shown that bacteriophages that integrate into bacterial genomes are more abundant than bacteria themselves in the human bladder. The study was published Monday (January 29) in the Journal of Bacteriology.

“Because virome studies are much more difficult to do, we know a lot less about our virus inhabitants and how they are associated with health and disease,” says Chloe James, a medical microbiologist at the University of Salford in Manchester, U.K., who did not participate in the work. “It is really important...

This study began when computational biologist Catherine Putonti of Loyola University, Chicago, was helping colleagues at Loyola University Medical Center make sense of sequencing data from bacteria collected from the bladders of 181 female patients with and without urinary problems. That’s when she noticed there were “a lot of viruses,” she tells The Scientist. Putonti and her team decided to take a deeper look at the viral sequences.

“There’s bacteria in the bladder but there’s just not a lot of it, so my thought was, ‘If there’s not that much bacteria, there’s probably not going to be that many viruses,’” says Putonti. “What surprised me the most was how abundant the phages were.”

In all of the niches, there’s so little known about viruses that every time you sequence any viral community, there’s always a massive amount of novelty. —Chloe James,
University of Salford

The researchers identified more than 450 possible phage sequences within the majority of the nearly 200 bacterial genomes that they examined. More than half of these viral sequences were not found in any databases, suggesting that they could be phages unique to the urinary tract.

“We find this time and time again,” James says. “In all of the niches, there’s so little known about viruses that every time you sequence any viral community, there’s always a massive amount of novelty. It highlights how much we still don’t know.”

The authors found sequence similarities in phages from different women, which points to the possibility of a shared set of bladder phages. They also saw some variations in phage populations between the samples from women with and without urinary issues, including overactive bladder, incontinence, bladder pain, and urinary tract infection.

To determine whether the phage sequences they detected were intact and able to infect bacteria, the team isolated a new phage from an E. coli strain in the bladder. They captured electron micrographs of the purified phage and tested whether it could lyse bacteria in culture. Although the virus was originally integrated into the host’s genome, it was able to kill other bacteria, suggesting that it is indeed a functional bacteriophage.

“No one has previously done as thorough a characterization of bacteriophages from the bladder,” says Jeremy Burton, a human microbial ecologist at Western University and Lawson Health Research Institute in London, Ontario, Canada, who was not involved in the work. He cautions that because the authors examined the genomes of bacteria that were grown in the lab, it is possible that the study misses bacteriophages that are integrated into the genomes of bacteria that are more difficult to culture. Nonetheless, “it’s a really good first paper,” he says.

By adding a culture step, the authors will have missed some phages, agrees James, “but what they have found is more meaningful because they can connect the phage sequences to their bacterial hosts. The challenge with many virome studies is finding the right susceptible hosts, so that you can grow the phage and find [its] functional roles.”

Putonti’s group is already at work characterizing more phages isolated from bladder bacteria, as well as collaborating with clinicians to determine whether these viruses play a role in diseases of the urinary tract.

“It’s great that [the authors] are addressing the potential impact of the viral community on this microbial niche,” says Kristine Wylie, who studies the human virome and microbiome at Washington University School of Medicine and did not participate in the work. “We have to look to see what’s there before we can really start to figure out what it means.”