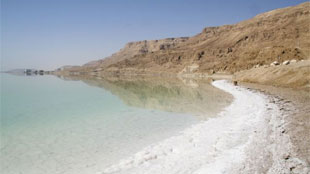 The Dead Sea, where Haloferax volcanii lives Wikimedia, Ian and Wendy SewellOur genetic material is packaged into chromatin—DNA wrapped around proteins called histones, then bound up in bundles called nucleosomes. This style of packaging has long been considered a hallmark of eukaryotes, a way of compressing our large genomes into manageable sizes and controlling the expression of our genes. But scientists from the University of Toronto have shown that archaea—a separate domain of life—also wrap their genomes around histones in a way that resembles eukaryotic chromatin.

“The conventional wisdom was that the purpose of chromatin was genome-packaging—fitting a 4-meter stretch of DNA into a 5-micrometer nucleus,” said the University of Toronto’s Corey Nislow, who led the new study. But archaea do not have a nucleus, and their small circular genomes are easier to package inside their cells. “If the primary role for chromatin is not packaging, it might...

There are two types of archaeal histones, which collectively form bundles of four and protect around 60 base pairs of DNA. By contrast, eukaryotes have four histone types that assemble into clumps of eight and protect around 147 base pairs. “[Our knowledge of these archaeal histones] is analogous to the state of the eukaryotic histone field pre-1985, before we had any sense of how DNA sequence determines nucleosome positioning and before we appreciated the fundamental role of histones in regulating gene expression,” said Nislow.

His team has started to address these gaps by mapping where histones are found across the entire genome of Haloferax volcanii, a salt-loving archaeon that lives in the Dead Sea. “It offers an important data set and a glimpse into the question of ancient origins of chromatin,” said Frank Pugh from Pennsylvania State University, who was not involved in the study.

Ron Ammar, a graduate student in Nislow’s lab, used a strategy that has worked well with eukaryotic genomes—fusing histones and DNA together with formaldehyde, digesting the un-fused sections of DNA between the nucleosomes, then stripping off the histones to reveal protected stretches of DNA. By sequencing these fragments and comparing them against H. volcanii’s full genome, Ammar created a map of sequences that were protected by histones.  “This is the first such analysis in Archaea and it is considerably satisfying to see it,” said Peter Geiduschek from the University of California, San Diego, who did not participate in the research.

The map showed that H.volcanii’s nucleosomes are positioned periodically, just like those of eukaryotes. However, in a given stretch of DNA, the archaeon had around three times as many nucleosomes as eukaryotes, probably because its histones form clumps of four rather than eight, and thus package less DNA in each nucleosome.

Ammar compared these positions to data he collected on H.volcanii’s gene expression, and found that sites where genes start to be transcribed are histone-free deserts, flanked by nucleosomes at specific positions. Both of these features are hallmarks of eukaryotic genome organization.

Nislow thinks that these conserved features suggest that the basic architecture of chromatin evolved before archaea and eukaryotes split apart—more than 2 billion years ago—with the original function of controlling genes.

But John Reeve from Ohio State University, who first discovered archaeal histones in 1997, said that the team has not actually shown that the undigested DNA fragments are being protected by histones. “[It is] a reasonable assumption, but nevertheless an assumption,” he said.

To verify that the histones are indeed protecting DNA, and that this association regulates genes, Nislow’s team is now “stressing the heck out of Haloferax to induce large-scale changes in gene expression.” If these are reflected in changes in the positions of the nucleosomes, then it would support the idea that the nucleosomes are directly involved in controlling gene expression.

But even if archaeal histones are controlling gene expression, it seems unlikely that they are doing so in an essential way. After all, Reeve’s team managed to delete histone genes from some archaea without killing them, or greatly affecting gene expression. And, Geiduschek pointed out, some archaea do not have histones, but do have proteins that are typically associated with chromatin. “What might a genome-wide analysis of their chromatin show?” he wondered.