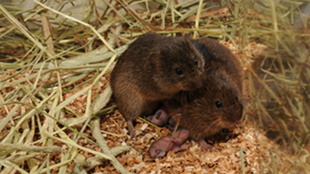 ZUOXIN WANGThe mechanism behind prairie voles’ lifelong social monogamy is partly epigenetic, according to a paper published today (June 2) in Nature Neuroscience. Female prairie voles become bonded to their mates for life following the acetylation of histones in a brain region called the nucleus accumbens. The acetylation takes place near the promoter regions of genes encoding oxytocin and vasopressin receptors, molecules that have previously been associated with prairie vole pair-bonding.

“It’s the first time anyone’s shown any epigenetic basis for partner preference,” said Jeremy Day, a neuroepigeneticist at the University of Alabama at Birmingham who was not involved in the study.

Mohamed Kabbaj, a neuroscientist at Florida State University and an author of the paper, said that work in other species gave him clues that epigenetics could be important for social behavior. For instance, previous work suggests that modifications are involved in bonds between mothers and offspring...

To test whether acetylation was involved in pair bonding in prairie voles, Kabbaj and colleagues injected trichostatin A (TSA), an inhibitor of histone deacetylases (HDACs), into the prairie voles’ brains. Under ordinary circumstances, sexually naïve prairie voles only mate and form pair bonds after being placed together for some time—say, about a day. Six hours is generally insufficient to induce a pair bond. But when treated with TSA, even the prairie voles placed together for only short periods formed pair bonds, even though they did not mate. “TSA is playing the role of mating,” Kabbaj said. A less specific HDAC inhibitor, sodium butyrate, had similar effects.

The rapid pair-bond formation in TSA-treated females was accompanied by elevated levels of the oxytocin and vasopressin receptors, as well as acetylation, in the nucleus accumbens, a brain region previously shown to be involved in pair bonding. These findings suggest that the acetylation affects gene expression and pair-bond formation in the prairie voles. The researchers also measured mRNA expression and found that it was significantly elevated for oxytocin but not for vasopressin, which they said could have been an issue of the timing of measurements.

When the researchers blocked vasopressin or oxytocin receptors in the animals, the TSA had no effect on pair bond formation, supporting the theory that oxytocin and vasopressin were mediating the effects of the epigenetic modification.

Finally, the scientists measured acetylation and mRNA and protein expression in the nucleus accumbens of untreated female prairie voles after they had mated with a male and formed a pair-bond, and found similar patterns to those seen in TSA-treated prairie voles.

“The mating and cohabitation produced the exact same effects [as TSA],” said Bruce Cushing, a behavioral neuroscientist at the University of Akron who was not involved in the study. “That is really powerful.”

However, TSA did not promote vasopressin and oxytocin receptor expression in prairie voles that were not exposed to males, indicating that other factors related to social contact must contribute to inducing pair bonds.

Kabbaj, Cushing, and Day all say that many more types of genetic modification in numerous locations in the genome are likely involved in pair-bonding. “I think this is probably just the tip of the iceberg as far as which modifications are involved,” said Day.

While acetylation might maintain vasopressin and oxytocin expression over a short period of time, long enough for the prairie voles to initiate a bond, the researchers said that that it was a relatively impermanent modification. A more long-lasting modification, such as DNA methylation, might be key to a continuing bond. “The next phase will be looking at the maintenance of the social bonding,” said Kabbaj.

Correction (June 3): This story has been updated from its original version to reflect that the researchers injected TSA into prairie voles' brains, not ferrets' brains. The Scientist regrets the error.