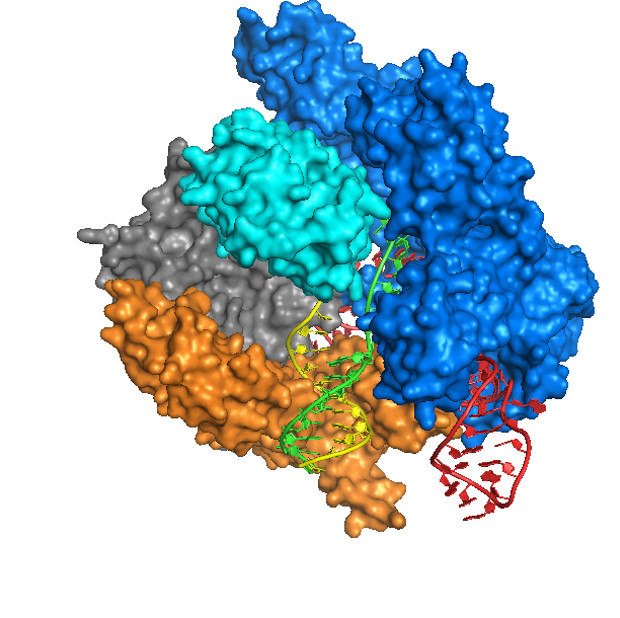 Crystal Structure of Cas9 bound to DNAWIKIMEDIA, CAS9 WIKI PROJECTWhile several groups are working to apply the CRISPR/Cas9 system for clinical purposes, some are using the tool to address fundamental questions about biology. Reuven Agami, a professor of genetics at the Netherlands Cancer Institute in Amsterdam, and his colleagues recently applied CRISPR to search for regulatory enhancer elements throughout the genome. They targeted the Cas9 nuclease to previously identified enhancer elements—transcription factor-binding DNA sequences that distally regulate gene expression—of two transcription factors: p53, and estrogen receptor alpha (ERα), which are both frequently mutated and deregulated in cancer. The team’s findings, published today (January 11) in Nature Biotechnology, highlight key enhancer sequences of these two proteins, and demonstrate the utility of CRISPR for the systematic study of noncoding DNA sequences.

“This [CRISPR-based approach] is really necessary because it is quite difficult to assess the function of regulatory elements in endogenous situations, without using reporter assays,” said Ramin Shiekhattar, who studies the human epigenome and the molecular bases of cancer at the University of Miami Miller School of Medicine but was not part of the current work.

Many mutations in protein-coding genes are known to contribute to the growth of cancer. Finding mutations in noncoding regions that affect cancer growth has been a challenge.

“The proper function of enhancers is essential for maintaining healthy tissue and there are many hints that their malfunction in cancer may cause changes in gene expression that favor tumor development,” said Agami. “What we needed was a tool to pinpoint which enhancers are potentially important in cancer because it is difficult to tell if a noncoding mutation in a tumor is causal for the tumor’s growth, or a consequence of it.”

Agami’s team built a CRISPR single-guide RNA library targeted to 685 genomic sites, representing around 90 percent of the known enhancer elements of p53. Beyond the single-guide RNA, the human cells used for the screen also expressed p53 and an inducible oncogene, Hras. Inducing the aberrant expression of Hras causes p53-mediated cellular senescence. But if the team used CRISPR to knock out an enhancer essential for p53 function, expression of Hras enabled the cells to continue to grow uninhibited. In this way, the team identified three enhancer elements important for p53 function, including two just upstream of p21, also known as cyclin-dependent kinase inhibitor 1A. Apparently, p53 needs to bind at these two sites upstream of the p21 gene to fully activate cellular senescence.

“It is exciting to see this strategy work,” David Root, director of the Broad Institute’s Genetic Perturbation Platform who was not involved in the work, wrote in an email to The Scientist. “Next, it will be useful to learn how comprehensive this approach is. What fraction of all the candidate sites were accurately tested with a couple of sgRNAs [single-guide RNAs] apiece?”

Having classified DNA elements required for ERα activity, Agami’s team plans to sequence these loci in breast tumor samples from patients that developed resistance to antiestrogen therapy. “We would like to know whether these tumor samples have accumulated mutations in these enhancer elements that may explain why the tumors became resistant to therapy,” he said.

A useful extension of the current study, said Shiekhattar, would be to look at the enhancers active in specific contexts—such as precise times during development and in specific tumor types. “We can’t quite recapitulate what happens in vivo with tissue culture,” he said. “Now, we could be using CRISPR in mouse models.”

“What CRISPR/Cas9 has done for us is to make targeting mutations really trivial,” said Moens. “Applying this to [noncoding sequences] is clever, and it is surprising to me that it worked. But in principle, the idea is the same, to disrupt a regulatory element rather than the gene itself using a loss of function approach.”