Birds have a rich vocal repertoire that they use to communicate with their peers, but behavioral ecologist Mylene Mariette is more interested in the calls they make when they are seemingly alone.

While working as a researcher at Deakin University in Australia, Mariette had planted microphones in the nests of captive zebra finches (Taeniopygia guttata) to study how male-female pairs coordinate their parenting efforts. One day in 2014, she noticed that “sometimes one parent would produce a very different call when it was incubating by itself,” Mariette recalls, which led her to wonder “whether it was communicating with the embryos, because they were the only audience there.”

We know a lot about what happens before the eggs are laid and when they hatch, but in the middle, there's actually not a lot known.

The cry she overheard—a form of vocal panting—is one that finches produce when temperatures rise, and while further observations showed that they do sometimes produce this heat call when alone or around other adults, it is most often made in the presence of eggs, especially those nearly ready to hatch. And the developing chicks respond: playback experiments revealed that chicks that heard the call before hatching grew more slowly, possibly to reduce the oxidative stress caused by high temperatures or to maximize heat dissipation from their smaller bodies. In addition, heat call–exposed birds sought hotter nests as adults, produced more fledglings during their first breeding season, and were more amenable to trying new foods than were controls who didn’t hear the heat call as embryos but were otherwise reared in the same hot conditions. Male finches in particular learned a more diverse repertoire of calls, which increased their reproductive success. 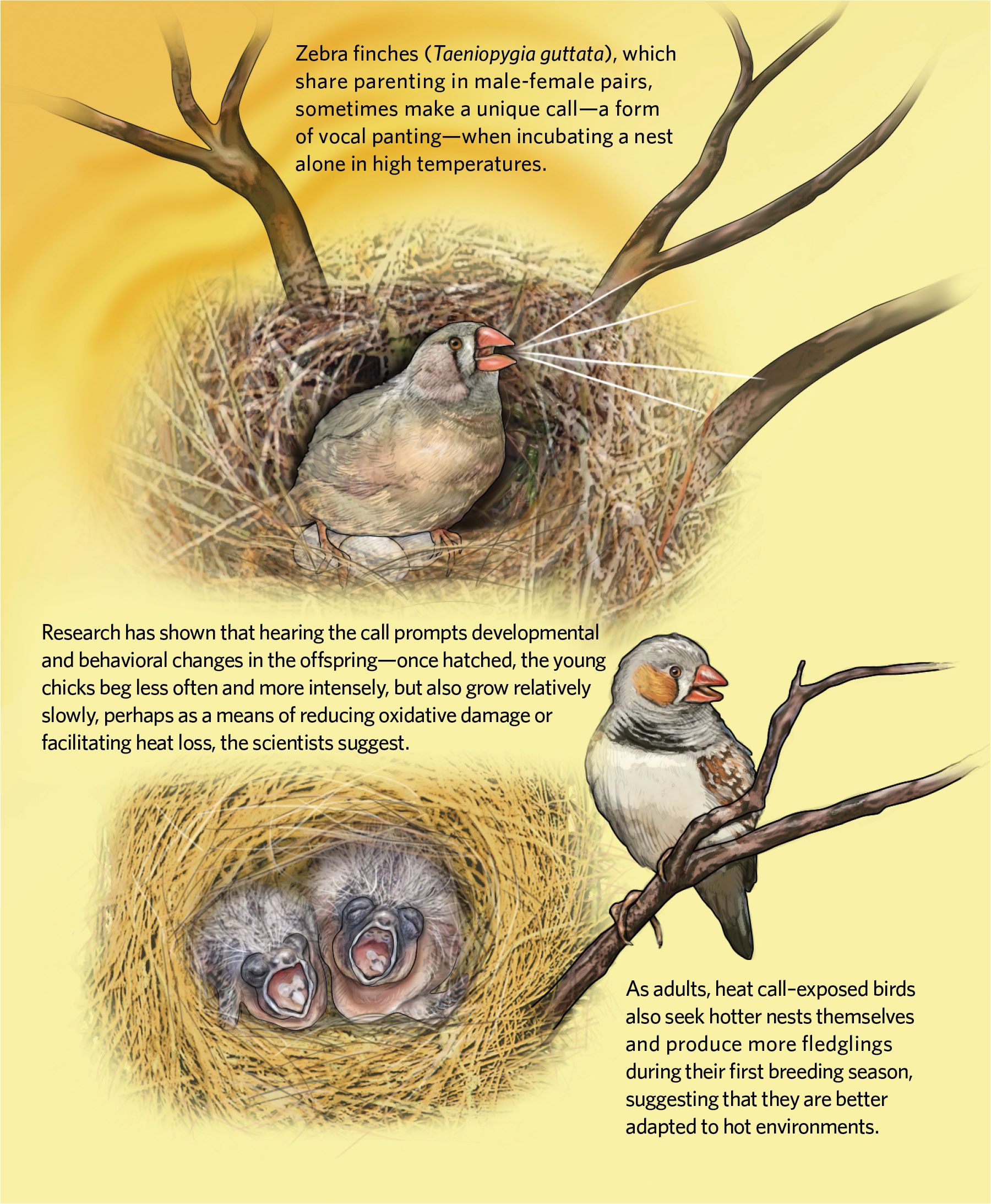 Mariette is not sure whether the avian parents were making the call intentionally to communicate with their young or if the chicks were eavesdropping, and she notes that it’s common for an existing behavior, such as vocal panting (which dissipates heat), to be coopted for another purpose such as communication. Regardless of how it evolved, the exchange of information likely benefits everyone, she says. Chicks that were exposed to heat calls as embryos begged less, though more intensely, than control chicks when reared in hot nests, her group found, perhaps because begging is energetically expensive. “If they match their parents’ capabilities, they don’t waste their own effort, begging more than the parents can afford,” Mariette says.

See “Slideshow: How Animal Embryos Eavesdrop on the Outside World”

Mariette and her colleagues termed the phenomenon of embryos perceiving and responding to external sounds or other vibrations “acoustic developmental programming,” and they’ve since described it in several papers, including a recent review. When Mariette began searching for other examples, she found them across egg-laying species—in birds, reptiles, amphibians, and insects—and later found evidence in humans as well. While the researchers in those studies hadn’t always set out to discover prenatal communication, their results support the idea that rather than lying dormant in the safety of the egg or womb, embryos are constantly tuning into auditory stimuli that influence their developmental trajectory.

These stimuli come in the form of calls, other sounds, and physical vibrations. The information can originate from parents, siblings, or potential predators. Researchers are now uncovering the specific mechanisms behind the resulting developmental shifts in egg-bound embryos, as well as the potential benefits, while studies of rodents and humans are elucidating how sound influences brain development and even language acquisition in mammalian embryos gestating in a womb. (See “How Sound Affects Development in Gestating Mammals” at the bottom of the page.)

“The ability of embryos to sense sound and vibration could be ancestral, but the way it’s used evolves in each species independently depending on its advantages,” Mariette, now at the Doñana Biological Station in Spain, tells The Scientist. “When we put it all together, we realized it’s very common.” 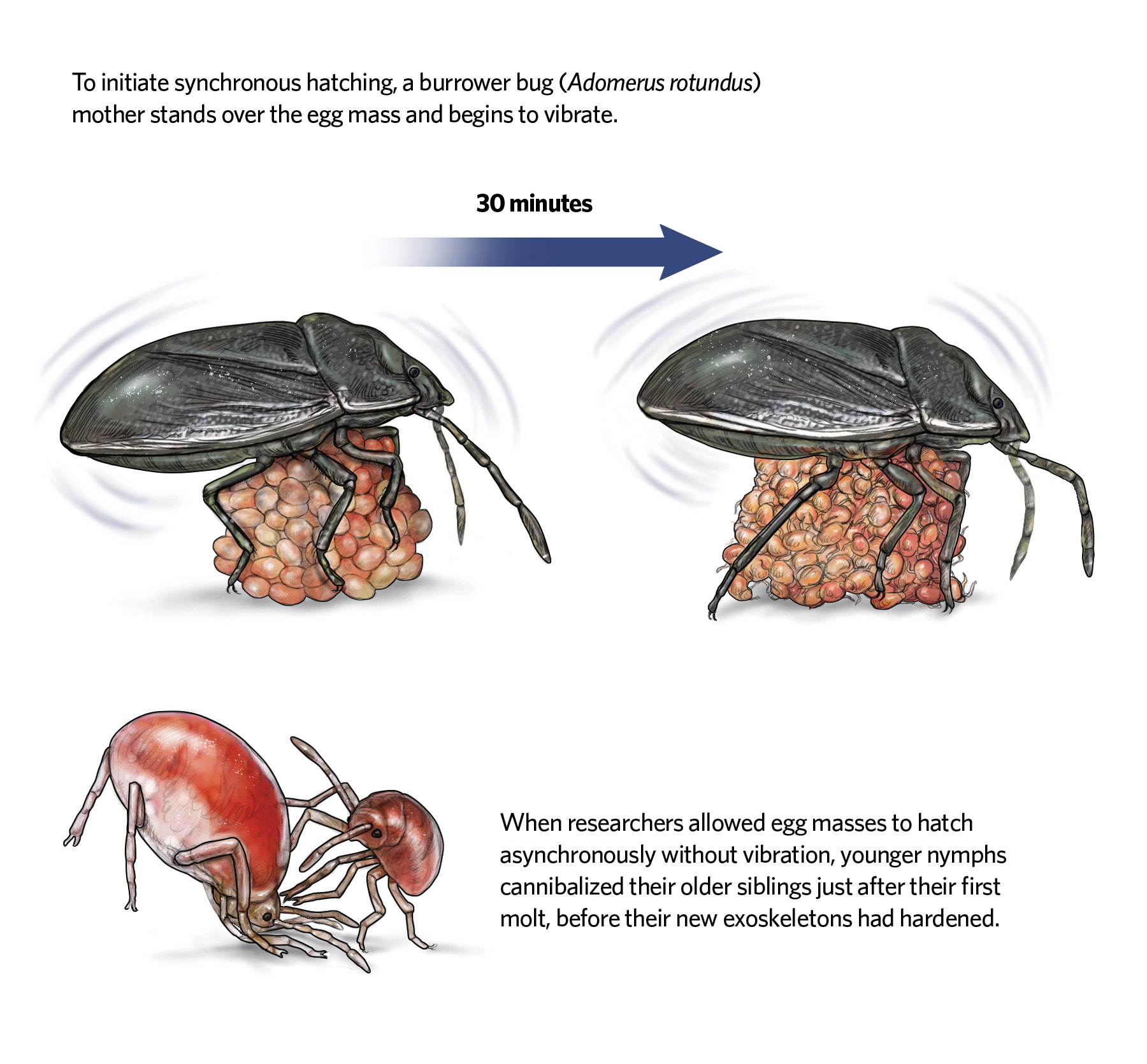 Preparing for life on the outside

In some of the simplest examples of acoustic developmental programming, embryos can use sound to synchronize their hatching. Turtles and crocodiles, which bury their eggs in sandy nests below ground, do this to overwhelm predators. The reptilian embryos will call to one another and, when the chorus reaches a crescendo, begin their mad dash to escape their eggs, ascend to the sand’s surface, and scurry into the water.

Embryos of the stink bug Halyomorpha halys also listen to their peers, but in their case, that’s because they themselves are the predators. Hatching produces an explosive crack, which prompts all the young to emerge so that the last ones out aren’t eaten by their older kin. And clutches of the burrower bug Adomerus rotundus and the shield bug Parastrachia japonensis each hatch in unison in response to maternal vibrations in part to guard against sibling cannibalism. In the case of the shield bug, all larvae emerge at the same time to limit immediate cannibalism, while in the burrower bug, the highest risk isn’t immediately after hatching but following the first molt, when older nymphs are soft and more vulnerable to being attacked by younger, smaller siblings. Simultaneous hatching can also help P. japonensis mothers protect and feed their young more efficiently because the larvae are at the same developmental stage. 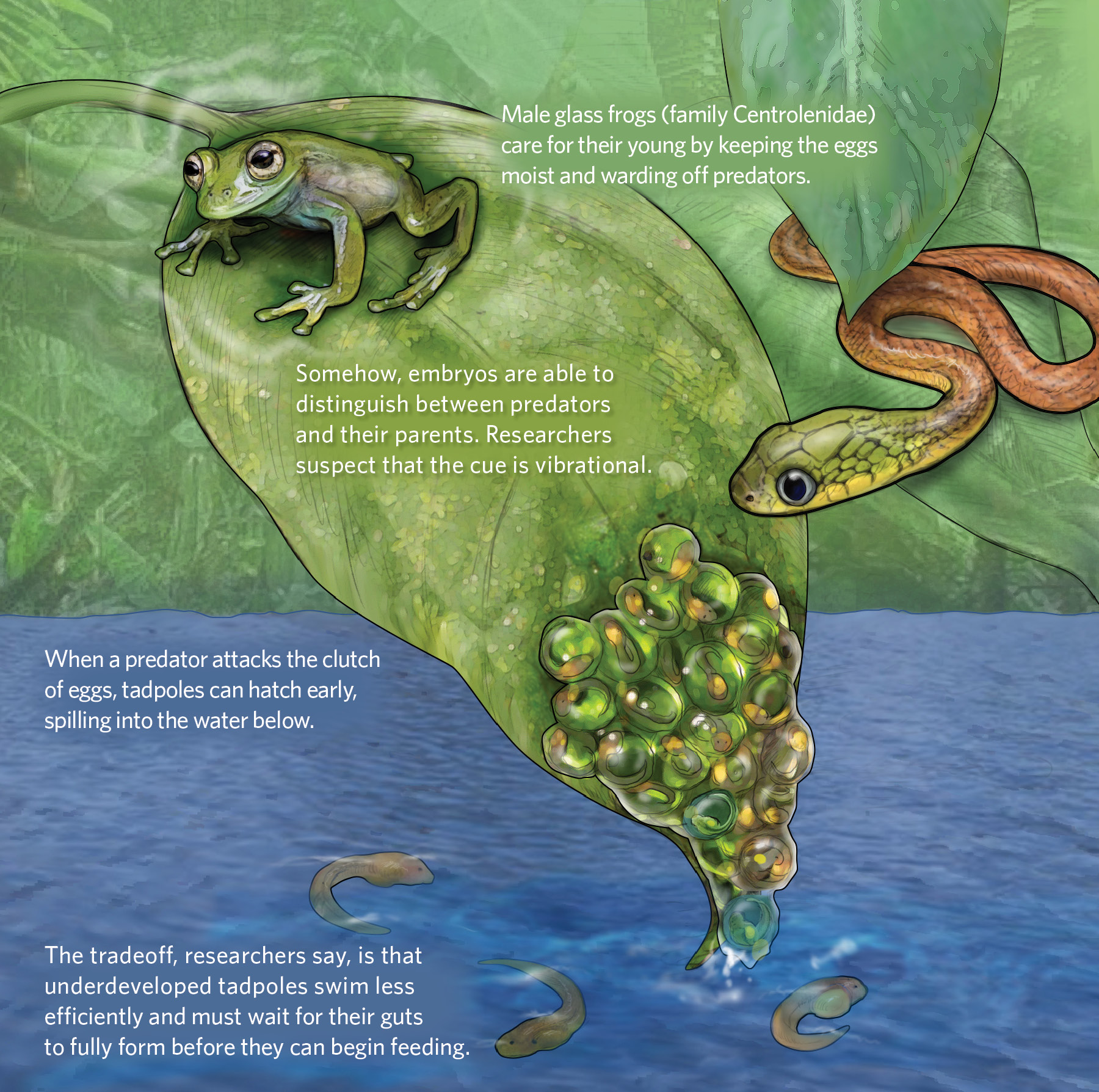 Animal embryos can also use sound to respond to the variable risk of predation by other species. Mites, for example, delay hatching by hours when they sense the vibrations of various species of predatory mites walking by or actually attacking, Kyoto University entomologist Shuichi Yano and colleagues found, as they are safer inside their tough eggs than as vulnerable larvae. Vibration “provides a direct channel for information transmission from the environment,” Yano writes in an email to The Scientist.

Glass frogs (family Centrolenidae), which lay their eggs in clusters on the undersides of leaves overhanging ponds in the neotropical rainforests of Panama, take it one step further. They are able to delay hatching if they sense a nearby predator—doubling or even tripling their embryonic period from roughly 7 to up to 21 days—or they can hatch spontaneously in the face of an attack as an attempt to escape, even before they are fully developed. This hatching plasticity comes in handy, says organismal biologist Jesse Delia, as everything, it seems, wants to eat these frogs. During his doctoral research at Boston University, he documented predation attempts on five frog species by snakes, spiders, grasshoppers, and ants.

Embryos seem to differentiate friend from foe, says Delia, now a postdoc at the American Museum of Natural History, but he’s not sure exactly how. “There’s clearly some ability to distinguish between parents and dangerous cues,” he says, adding that perhaps the unhatched frogs become habituated to the sounds of their father as he mates, confronts predators, and tends the eggs. When a signal, likely a vibration, deviates from the norm, it puts the embryos on alert, Delia speculates, and signs of danger trigger an adjustment in hatching time.

Such adjustments can come with a tradeoff, however. In Delia’s research, tadpoles that hatched early were less efficient swimmers and were prone to being picked off by predatory fish. In 2014, Fabien Aubret, an evolutionary biologist at the French National Centre for Scientific Research, found evidence of a similar tradeoff among newly hatched viperine water snakes (Natrix maura), which often emerge from their eggs synchronously with other clutches of varying ages laid in the same hollow log or other cavity. Using infrared technology borrowed from the poultry industry, Aubret monitored the heart rate of 77 eggs he’d reared in artificial clutches of two sets of eggs that differed in age by six days. He found that the snakes can sense the heartbeats of their neighbors and shift their own accordingly: younger snake embryos had faster heart rates than controls raised in isolation, which in turn increased their metabolism. Additionally, Aubret says, the younger snakes forewent sleep, when metabolic rates typically drop, speeding their maturation so they could hatch with the older eggs. Once they hatched, however, the younger snakes were shorter and swam less efficiently than controls.

While Aubret has since moved on to studying different species and pursuing other questions, the release of more research on prenatal communication has made him consider returning to the snakes. For now, he tells The Scientist, he’s excited to see what other examples researchers turn up and what they learn about how and why embryos are responding to external cues. “I’ve always thought the incubation period within any egg-laying organism is a black box,” he says. “We know a lot about what happens before the eggs are laid and when they hatch, but in the middle, there’s actually not a lot known there.”

To better tackle the “how” of acoustic developmental programming, Mariette’s zebra finch team recently gained a new member when Julia George, a neurobiologist at Clemson University, joined in 2020 to lend a genetic eye to the behavioral findings. “Our hypothesis is that there are two phases to the developmental reprogramming,” she says. “First, there would be the initial response, how the birds respond to the stimulus of the heat call. . . . And then the second part is how you go from that acute response to more persistent changes that affect the development of the birds so that they will be more tolerant to heat as they grow.”

While the work is not yet published, George says the team is currently analyzing RNA expression and DNA methylation in brain tissue from unhatched chicks to gauge the embryos’ developmental responses to both short-term and chronic heat call exposure. In their preliminary results, repeated exposure does appear to be triggering something, she says. “I have a signal, which I think is really different between the heat call–exposed animals and the animals exposed to control calls. I’m excited that there’s this difference . . . but I can’t really interpret what it is yet.” 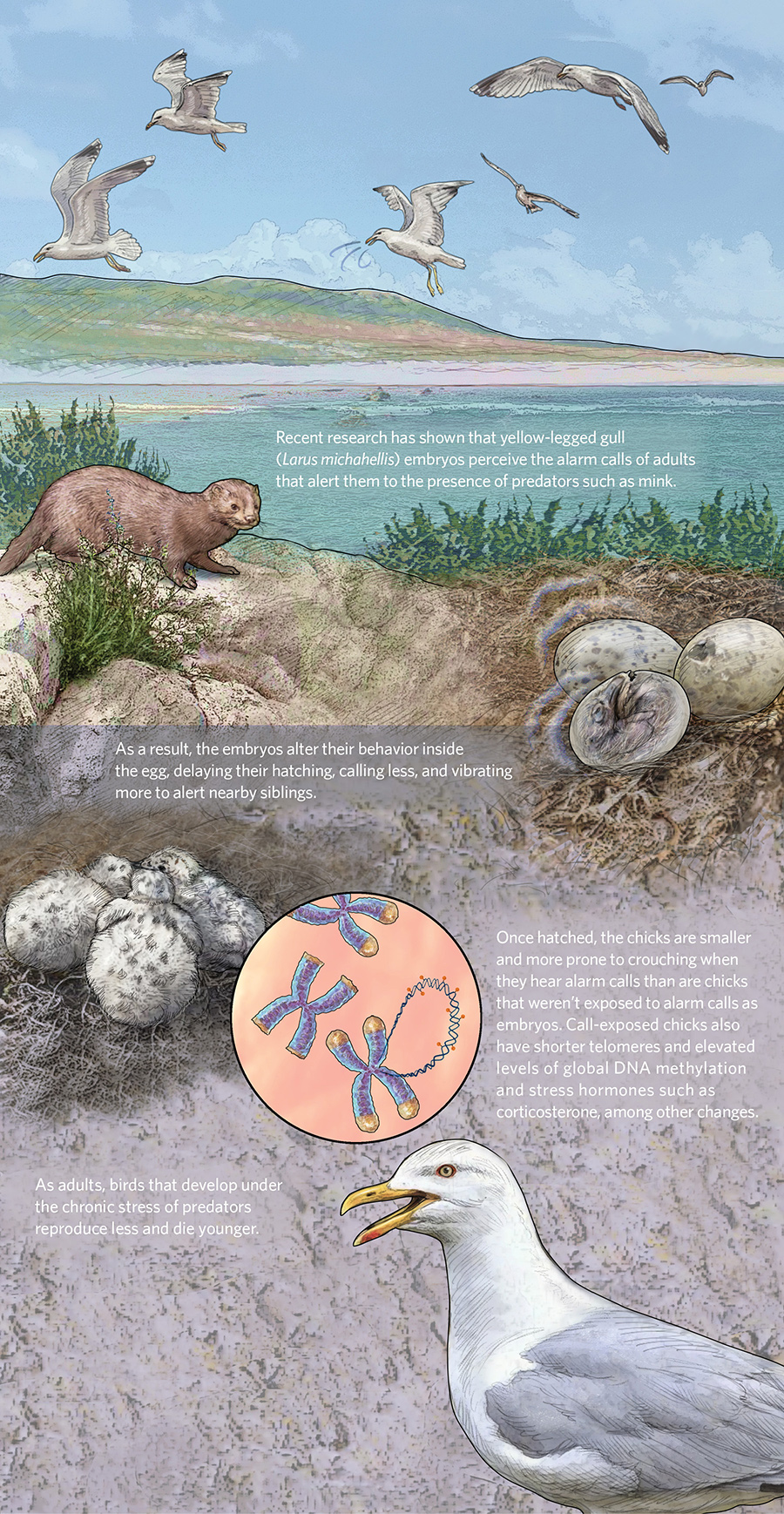 Such responses wouldn’t be unprecedented. A couple of years ago, in yellow-legged gulls (Larus michahellis)—long-lived, colonial seabirds that lay clutches of three eggs—researchers documented increased global DNA methylation among chicks in artificial lab clutches that heard adult gull alarm calls as embryos, along with higher levels of the stress hormone cortisol and fewer, smaller mitochondria (indicatory of lower energy production) compared with controls. There were behavioral changes too: chicks that heard the calls from within their eggs delayed their hatching, and while still in the egg, vocalized less and vibrated more, perhaps to share information quietly. After hatching, these chicks were also quicker to crouch upon hearing the alarm call.

Importantly, these developmental and behavioral changes were shared by all three of the hatchlings even when only two eggs were exposed to the alarm calls during the experiment, likely because the siblings were moving inside their eggs and rubbing the shells against one another when predators were near. Study coauthors Jose Noguera and Alberto Velando, both evolutionary ecologists at the University of Vigo in Spain, say they expected some level of information trading among the eggs. But Velando notes in an email to The Scientist that “the extent to which the non-exposed chicks showed the same responses as their exposed siblings was quite surprising.”

In a Nature Ecology and Evolution commentary published alongside the yellow-legged gull study, Mariette and her Deakin University colleague Katherine Buchanan wrote that the findings “suggest a degree of developmental plasticity based on prenatal social cues which had hitherto been thought impossible.” Even as they urged further studies to follow the long-term effects of these developmental changes, they added that the work is “pivotal in redefining avian embryos from passive subjects isolated from the outside world, to well-informed players, responding to diverse social cues in their external environment.”