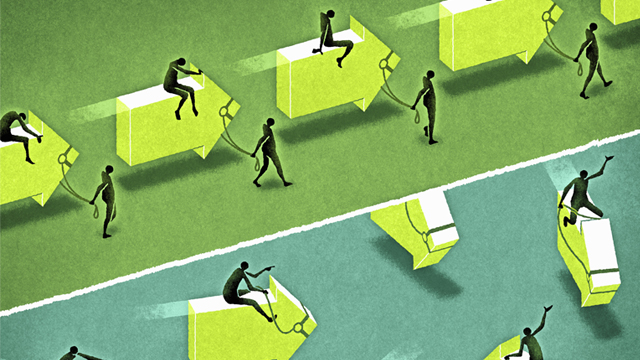 Genomes are hotbeds of evolutionary conflict. Perhaps nothing speaks to this idea better than the war raging between retrotransposons and their host genomes. Retrotransposons, often referred to as jumping genes, are mobile genetic elements that parasitize host machinery to replicate themselves across the genome. Since their emergence more than 100 million years ago, retrotransposons have been enormously successful. Modern mammalian genomes, for example, are riddled with the scars of these copy-and-paste events, with retrotransposon-derived DNA now accounting for nearly 50 percent of the human genome.

The most dangerous retrotransposon in mammalian genomes is the long interspersed nuclear element-1 (LINE-1 or L1). L1 retrotransposons are a little more than 6 kilobases long and encode an RNA-binding protein and an endonuclease with reverse-transcriptase activity that allow the element to autonomously replicate in the host genome via an RNA intermediate. The human genome contains more than 500,000 copies of...

Some of the highest L1 activity has been observed in aging tissues, par­ticularly those affected by age-related pathologies such as cancer.

Historically, almost all research on these genomic parasites has focused on their activity in the germline, where any genomic changes will be inherited in the next generation. Little attention has been given to retrotransposition in somatic tissue, because this was thought of as an evolutionary dead end. In recent years, however, evidence has accumulated that L1 elements can become active in a variety of somatic tissues in humans and mice, including in the brain, skeletal muscle, heart, and liver. Intriguingly, some of the highest L1 activity has been observed in aging tissues, particularly those affected by age-related pathologies such as cancer. This raises the interesting possibility that L1 activity may contribute to the aging process.

More and more evidence is accumulating to support this idea. Increased DNA damage and mutagenesis are prevalent in aging tissues, and L1 activity is known to increase following such damage. In addition, a small number of studies have shown that overexpression of L1 can cause cells to senesce, a hallmark of aging tissues. The role of L1 in driving age-related processes is now a topic ripe for study. 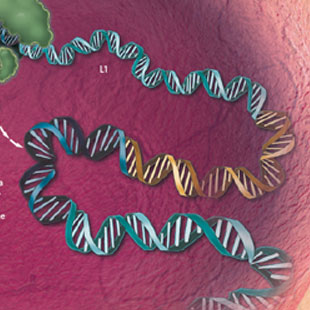 AGE LINES: The human genome is riddled with long interspersed nuclear element–1 (LINE-1 or L1) retrotransposons, with more than 500,000 copies throughout its length. While most of these are inactivated as a result of mutation, some 100 or so L1 elements retain their ability to copy and paste themselves among the chromosomes, posing diverse dangers to our cells and possibly contributing to age-related deterioration.
See full infographic: JPG | PDF© EVAN OTO/SCIENCE SOURCEThe most obvious threat posed by L1s is the risk of mutagenic insertions. Depending on where the retrotransposon inserts itself, it can predispose a cell to cancerous transformation, for example. In fact, a hallmark of cancer genomes is increased copy number and heightened activity of L1 retrotransposons. Additionally, multiple human genetic diseases have been reported to stem from L1-driven mutagenesis. But L1s can also wreak havoc on host genomes in a number of other ways. The L1 endonuclease can cause DNA single-strand breaks, for example; the L1 5′ untranslated region (5′ UTR) can deregulate transcription of adjacent host genes; the sheer volume of L1 DNA alone can cause erroneous recombination events. Because genomic instability and DNA damage are key features of aging, it is easy to envision how L1s may contribute to the molecular etiology of the aging process.

Perhaps the best evidence for the retrotransposon’s role in aging comes from the link between the activity of a longevity gene, SIRT6, and the repression of L1 in somatic tissues. SIRT6 encodes an enzyme critical to the forestallment of aging: it maintains telomere length, promotes DNA repair, regulates metabolism, opposes tumorigenesis, and attenuates inflammation—all processes associated with the prevention of age-related decline. Mice lacking SIRT6 suffer from a severe premature aging syndrome, while mice that overexpress SIRT6 enjoy extended life spans. Most recently, we found that SIRT6 plays a critical role in keeping L1 silent in young mouse tissues and in presenescent human cells by packaging the retrotransposons into transcriptionally repressive heterochromatin.1 Specifically, SIRT6 binds to the L1 5′ UTR, where it coordinates the assembly of heterochromatin proteins at the L1 promoter. Once assembled, this silencing machinery saturates the L1 5′ UTR and its associated chromatin with epigenetic modifications that prevent the retrotransposon from being expressed. (See illustration.)

Without the ability to express itself, L1 cannot synthesize the parasitic machinery required to initiate its own replication. As a result, the host cell is protected from de novo mutagenesis events. Additionally, because the L1 is heterochromatinized, it has limited ability to interfere with host gene expression or to induce erroneous recombination events. When SIRT6 is deleted from mouse cells or knocked down in human cells, the L1 5′ UTR escapes heterochomatinization, resulting in massive increases in L1 transcription and de novo L1 insertions.

Interestingly, the process by which SIRT6 silences L1 appears to become less efficient with age. During aging, SIRT6 becomes depleted from the L1 5′ UTR, resulting in the de-heterochromatinization of the L1 element. No longer restricted by repressive chromatin, the L1 element becomes transcriptionally active in multiple tissues of the aging mouse, as well as in senescent human cells. But what is happening during aging that prevents SIRT6 from efficiently safeguarding the old cells from these dangerous genomic parasites?

One explanation for this failure may relate to SIRT6’s critical role in DNA repair. Several studies have indicated that SIRT6 helps catalyze repair of the damage at numerous types of DNA lesions, including single- and double-strand breaks. A characteristic feature of aging cells is an increase in the amount of DNA damage. It is possible that, under basal conditions, SIRT6 is bound to the L1 promoter, enforcing silencing of the genomic parasite, but upon DNA damage, the enzyme vacates the L1 sequence to facilitate repair at the damage site. This creates a window of opportunity for L1 elements to escape repression and replicate themselves. Consistent with this model, when cells are treated with DNA-damaging agents, such as hydrogen peroxide and paraquat, SIRT6 leaves L1 sites and becomes enriched at damage sites.1

Several other factors may also limit the ability of SIRT6 to repress L1s in aging cells. For example, SIRT6 requires a substrate, NAD+, to perform its enzymatic activity. Levels of this metabolite are known to decrease in old cells, likely resulting in decreased efficiency of SIRT6. Moreover, SIRT6 expression levels decrease with age in several cell and tissue types. The reduced availability of the protein may also exacerbate age-related derepression of L1 elements. 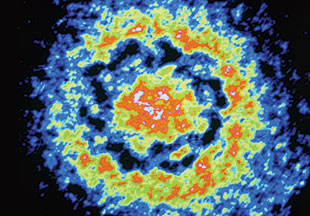 GENOME JUMPERS: Retrotransposons (a computer illustration of a yeast retrotransposon shown here) can cut-and-paste themselves across the host genome, increasing the risks of DNA dam­age, cancer, and other maladies. © JON WILSON/SCIENCE SOURCEThe relocalization of SIRT6 that occurs in a stressed or aging cell is reminiscent of a theory of aging called the relocalization of chromatin modifiers, originally proposed in 1998 by Japanese researchers Hiroaki Kitano and Shinichiro Imai2 and formalized nearly a decade later by Philipp Oberdoerffer and David Sinclair of Harvard Medical School.3 This theory postulates that, while mobilization of chromatin-modifying proteins such as SIRT6 in response to stress is beneficial in young organisms, redistribution of these elements may drive deleterious age-related changes. In this regard, the mobilization of SIRT6 to DNA damage sites and subsequent derepression of L1 elements may lead to the manifestation of age-related phenotypes and pathologies. For example, increased L1 activity may contribute to genomic instability—a hallmark phenotype of aging cells—by mutagenizing DNA via de novo insertion events and inducing DNA damage through expression of the L1 endonuclease. Moreover, because DNA damage draws SIRT6 away from L1 sites, this represents the commencement of a malicious cycle: L1-induced DNA damage forces SIRT6 to vacate L1 sites, leading to even higher L1 activity and more DNA damage. Similarly, L1 may be disrupting cellular homeostasis by inducing dysregulation of gene expression and clogging the transcriptional machinery of the host cell. Consistent with these possibilities, overexpression of exogenous L1 is sufficient to drive human fibroblasts and stem cells into stress-induced cellular senescence.4

Because genomic instability and DNA damage are key features of aging, it is easy to envision how L1s may contribute to the molecular etiology of the aging process.

The notion that derepression of L1s may be contributing to aging-related pathologies is especially appealing given that brain (in particular, the hippocampus and striatum), liver, and skeletal muscle tissue all appear to be particularly affected by age-dependent increases in L1 activity. Each of these tissues plays a critical role in maintaining organismal homeostasis across multiple signaling pathways, and each exhibits marked declines in function during aging. For example, it is tempting to speculate that increased L1 activity—and the subsequent DNA damage, inflammation, and taxing of the host transcriptional machinery—contributes to the atrophy and insensitivity to insulin signaling that characterize skeletal muscle during aging. Similarly, L1 retrotransposition in the aging brain represents another very intriguing, yet underexplored, mechanism that could explain many of the features associated with the aging nervous system.

Several studies have indicated that de novo insertions of retrotransposons within the nervous system appear to preferentially affect actively transcribed genes in the brain, most notably dopamine receptors, amino acid transporters, and genes regulating synaptic transmission. Taken in conjunction with some estimates that there are upwards of 80 to 800 new L1 insertions per cell in some brain regions,5 this represents a powerful mechanism by which these retrotransposons could modulate neurological activity and contribute to neurological decline during aging. Consistent with this idea, several neurological disorders, including Rett syndrome, Smith–Magenis syndrome, and schizophrenia are characterized by increased L1 activity.6 Given the observations that L1 activity is upregulated in older brains, it is tempting to speculate that derepression of L1s may contribute to age-related pathologies of the nervous system, ranging from cancer to neurodegenerative disorders, particularly those associated with aging, such as dementias.

Cumulatively, two clear pictures of L1 biology are emerging. First, L1 elements are clearly active within somatic tissue. While they have historically been ignored in somatic contexts, the sheer volume of their activity necessitates reinvigorated research to investigate their biological importance. Second, L1 activity may be particularly important within the context of aging biology. Increased L1 activity is associated with aging in multiple tissues, and the discovery that SIRT6 links L1s to aging provides researchers with a platform for further inquiries into the relative contributions of L1 activity to aging phenotypes.

Interestingly, a number of therapeutic vectors exist that may allow researchers to attenuate L1 activity and perhaps delay the onset of L1-driven pathologies related to aging. For example, in our own experiments we found that overexpression of SIRT6 was sufficient to silence L1s and to restore L1 silencing in senescent cells. While overexpression of SIRT6 may not be tractable in a therapeutic context, SIRT6 activity can be increased by caloric restriction, reducing glucose consumption, or increasing NAD+ bioavailability—interventions that have already shown promise in increasing longevity in animal models. (Such interventions are also showing promise in slowing the progress of some age-related neurodegenerative disorders. See “Nourishing the Aging Brain.”) Indeed, one study has indicated that caloric restriction is sufficient to repress age-related increases in L1 activity.7 Another intriguing idea is the use of reverse transcriptase (RT) inhibitors. L1s cannot copy themselves without RT, and there are a number of powerful RT inhibitors on the market that appear to effectively abrogate L1 activity. Deciphering the extent to which L1s contribute to aging and how to stop them represents an exciting challenge for aging researchers in the coming years.

Michael Van Meter is a doctoral candidate in the research group of Vera Gorbunova and Andrei Seluanov, biology professors at the University of Rochester. They investigate the biology of aging and genome stability in long-lived animals such as naked mole rats, squirrels, and whales.